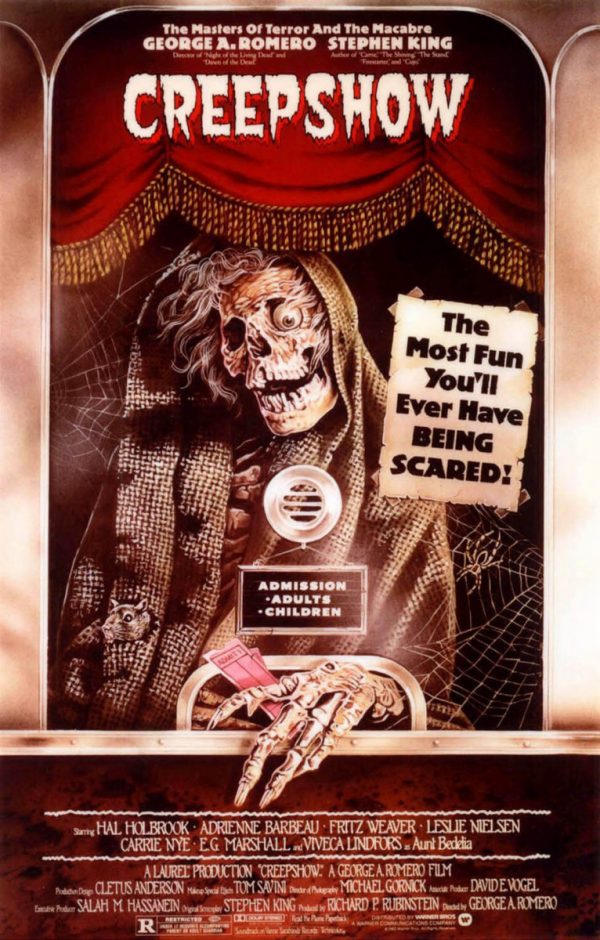 An anthology of five terrifying stories of ghoulish horrors ripped from the pages of classic horror comics. 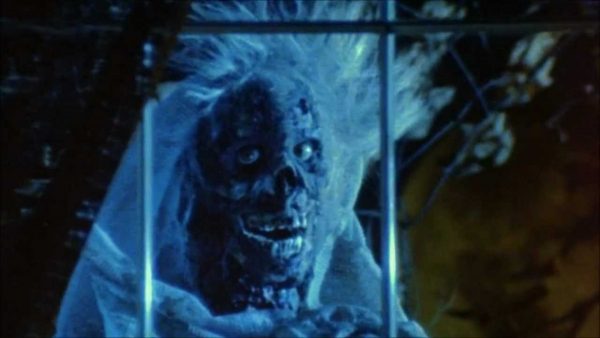 If there is one genre that has dominated cinemas for the last few years it’s the comic book film. Year after year our screens are filled with yet another costumed hero suiting up to battle villains to kill time before an inevitable crossover in which the fate of the universe is decided by a finger snap.

However, back in ye olden days, our comic books were filled with tales of ghoulish characters and macabre tales to terrify and excite. This clunky and likely inaccurate intro brings me to George A. Romero and Stephen King’s love letter to the horror comics that inspired them; the horror anthology Creepshow.

Creepshow is an anthology film that acts as an affectionate homage to the classic horror comics of the 1950s, with the film mimicking the look and feel of those classic horror books. The look of the film attempts to mimic the visuals style of comic panels, with title cards being lifted straight from the pages of a book, while more horrific moments are often bathed in red light with the background resembling strange surreal patterns. It’s all very visually creative and it shows that King and Romero are no mere causal horror comic readers. They’re full-blown horror comic nerds. 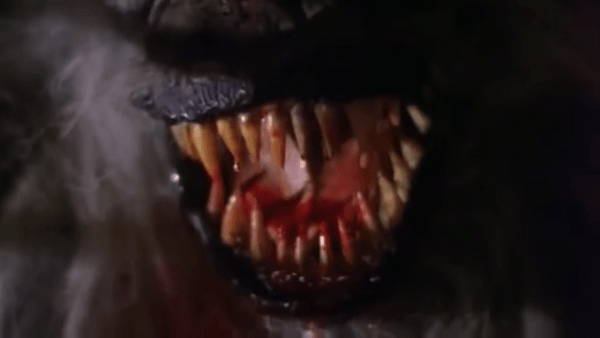 The feel of horror comics is mimicked with an often dark sense of humour, often lacing even the darkest of the stories with a macabre sense of fun that aims to make you laugh and scream. Although this approach is not always successful, with some segments perhaps overplaying the humour at the expense of horror or vice versa. Although, being an anthology film it’s unlikely that everyone is going to get quite the same reaction from every segment.

From here on I’ll try and provide a quick rundown of each segment and my feelings towards them. I’m skipping over the wraparound segment because really it only serves as a loose set up for the main stories, although I will say that Tom Atkins sure nails his role as the world’s most reactionary stuck up angry dad. Guy really hates horror comics.

Keep in mind that these are merely my own reactions to them, and it is more than likely we’ll disagree on what segments are best and worst. This is my review though so my opinion is obviously the best. 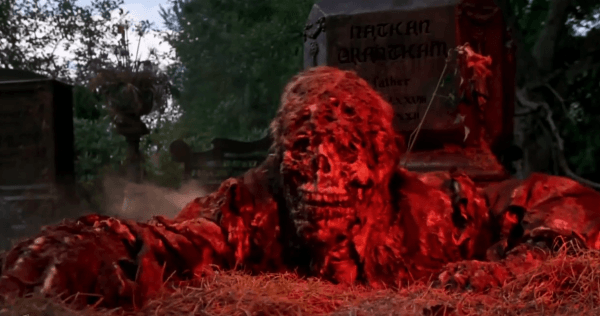 Our first segment entitled “Father’s Day” focuses on a family reunion haunted by the memory of a cantankerous old patriarch whose ghostly demand for cake echoes throughout the night.

This segment is probably my least favourite and it’s not because it’s awful or anything. It’s just very meh. The set up is good enough, a horribly abusive and demanding father who gets what he deserves only to seek revenge from beyond the grave. So far so good, but before we can get to that, we have to suffer through what can only be described as the most loathsome family reunion ever, with every character (except for maybe young Ed Harris) being very unpleasant and deserving of a horrible end. Suffice to say this segment wasn’t for me, but ghostly demands for cake are certainly a unique motivation for revenge. 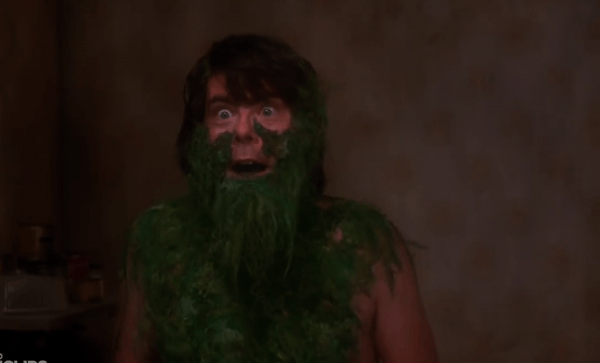 The second segment, entitled “The Lonesome Death of Jody Verrill”, focuses on the titular farmer as he is forced to contend with a meteor crash in his backyard and the ensuing uncontrollable vegetation growth that follows in its wake.

This is where things really get started, ditching horror almost entirely in favour of a zany and funny body horror story. Key to the success of the segment is the quirky performance of Stephen King in his acting debut, portraying the titular character with a lovable idiotic quality that makes you sympathise with his increasingly bizarre plight. The only thing that lets the segment down is it’s surprisingly depressing ending that doesn’t gel well with the overall silly tone of it. However, it’s still one of the better segments and worth a watch just to see King in what is the closest we’ll get to see him as a leading man. 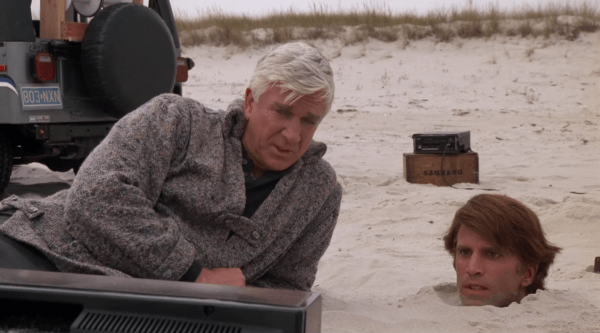 The third segment “Something to Tide You Over” follows wealthy psychopath Richard Vickers as he seeks revenge on his unfaithful wife and her lover.

This segment is one of the weaker parts of the film, devoid of humour and horror, saddled with a dull and cliched story before capping things off a big wet fart of an ending. The segment’s sole saving grace is a marvellously entertaining villainous performance from Leslie Nielsen, obviously having a great time as a rich psycho who treats murder like an afternoon trip to the beach. Overall, the segment is a bit of a letdown, that’s only worth watching for Nielsen’s performance. 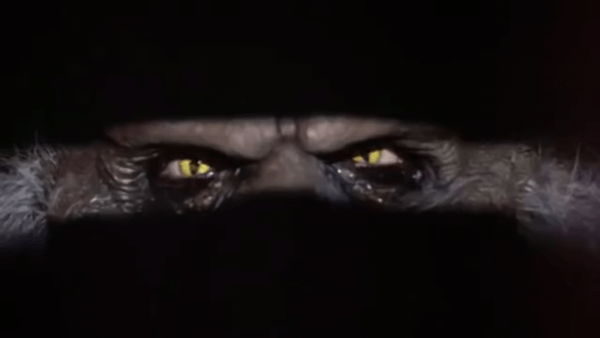 Our fourth segment “The Crate” follows a professor who is determined to see inside a mysterious crate that has been found in the bowels of a college basement.

This is where the film’s horror and humour elements finally start to gel more efficiently, with the segment managing to effectively balance gory creature-based horror with genuinely funny dark humour. The success of the segment is primarily due to the performances of Hal Holbrook as the world’s most henpecked husband and a delightfully monstrous Adrienne Barbeau as the world’s most obnoxious woman whose loud-mouthed proclamations just makes you (and apparently everyone else) want to see her meet a grisly end, with her arguably a bigger and more terrifying monster than the one lurking in the crate. 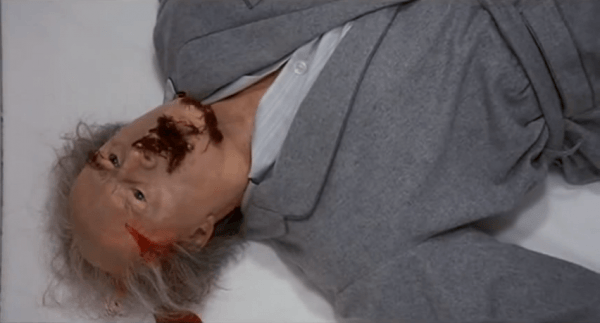 The final segment “They’re Creeping Up on You” follows a germaphobic landlord as he deals with a sudden roach infestation.

Closing the film is arguably the best segment. A simple almost one-man show with EG Marshall delivering a hilariously unpleasant performance as the world’s most unpleasant landlord. The type of guy who reacts to the news of an employee’s suicide with laughter. How scary you’ll find this segment depends on how much you hate cockroaches, with the sheer number of creepy crawlies bound to make squirm.

As this frankly convoluted review suggests, Creepshow is a very messy mixed bag of a film. The melding of horror and humour is far from cohesive and you do have to suffer through a few duds until the film-makers manage to balance the mixture properly. However, thanks to some good performances and more than a few moments of genuinely funny dark comedy, Creepshow is, at the very least, worth a peek. Check this one out if you’re curious.