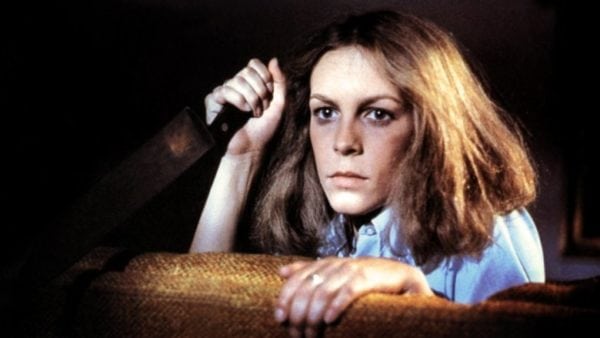 What more needs to be said about the one that started it all? John Carpenter’s visceral, rough-edged slasher classic has inspired generations of horror filmmakers and popularised a trope-set that’s still being dined out on today.

The chilling opening first-person sequence does a marvellous job of cementing the film’s tone from the outset; artful and deliberate, but as made clear by the brutal slaughter of a bare-chested Judith Myers (Sandy Johnson), also rooted in exploitation.

Carpenter melds that trashy gloss with a firm indie sensibility, lingering long on shots long after most filmmakers in the genre would cut, and having enough respect for the audience to let quietly suspenseful scenes breathe rather than fill the void with tension chords and jump scares. Carpenter also breaks the cardinal rule of horror by daring to feature Michael Myers extensively in the daytime, but thanks to the slow-building unease of the deliberate first act, it’s a gamble that absolutely pays off.

Not everything works in the film, though; there are a few lurches in pacing and Nancy Kyes, who plays Laurie’s babysitter pal Annie Brackett, gives a risible, over-affected performance throughout. It’s surely the movie’s biggest failing that so much of the second act focuses on her, and Annie’s climactic death scene is totally derailed by Kyes’ hilariously hammy acting.

Contemporary audiences should keep in mind, however, that Carpenter made the film for a mere $325,000, so as an achievement against limited resources, it’s reasonable not to expect world-class acting or production. And yet, Curtis and the brilliant Donald Pleasence turn in remarkable work here, such that the film suffers most any time they’re both off-screen.

Technically-speaking, it’s stood the test of time shockingly well; Carpenter’s creative camerawork and cinematography shames just about every subsequent entry into the genre, to say nothing of his inspired approach to scares. The famous bed sheet scene, of course, remains a rightful classic of the genre (and it’s surprisingly hilarious to boot), and while Carpenter does overuse his iconic title theme a little, it’s easy to understand why.

The original Halloween has a purity to it compared to succeeding movies which attempted to “refine” the formula for bigger scares, not to mention the contrived expansion of Myers’ mythos in the sequels. While there’s definitely some flab on its 92-minute bones, the less-interesting stretches are balanced out by some terrifically restrained suspense, ensuring that four decades on, Halloween remains a tenacious – if messy – exercise in atmospheric thrills.