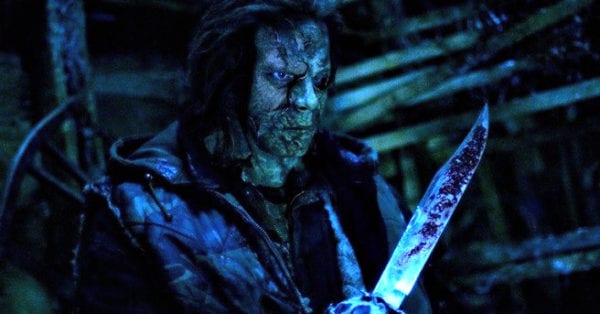 The sequel to Rob Zombie’s 2007 remake is infamous for putting the franchise on ice for almost a decade, delivering a sloppy mess of comically overwrought surreal imagery amid one of Michael Myers’ most yawn-inducing killing sprees yet.

Uneven though Zombie’s “original” movie was, it at least did a solid job of presenting a fresh, imposing riff on Myers, one which is taken to absurd levels this time around. With his homeless-chic attire and facial appearance bearing a suspicious similarity to Zombie himself, it naturally follows that the writer-director would have Myers kill and eat a dog sooner or later.

Largely transpiring two years after the events of the first film, H2 sees Myers escaping from custody following an hysterical sequence in which his ambulance collides with a cow. From this point, he’s guided on his rampage by an angelic vision of his mother (Sheri Moon Zombie), and because Zombie just can’t help himself, she’s of course accompanied by a mythological white horse. Zombie stages this with absolute sincerity and zero self-awareness for how embarrassingly on-the-nose it is.

Elsewhere Laurie (Scout Taylor-Compton) is now holed up with the Bracketts, and while Taylor-Compton certainly feels more at-home in the role, she’s again forced to spout plenty of inane dialogue and walk an ill balance between tortured and irritating. Danielle Harris also returns as Annie Brackett though does little of interest before being inevitably offed by Myers, while the low-key star of the show ends up being Brad Dourif as her Sheriff father. Dourif’s performance is tenacious and committed throughout, no more than in the devastating sequence where he discovers his daughter’s corpse; the heartbreak is palpable, and Dourif does a wonderful job in a movie that doesn’t remotely deserve him.

Sadly Malcolm McDowell isn’t served nearly as well this time around, with his Dr. Loomis pigeonholed into a cringe-worthy, cartoonish media whore stereotype, where he even ends up playing a scene opposite Weird Al Yankovic of all people (who he calls “Mr. Weird”, of course).

Almost the entire cast from top to bottom is regrettably saddled with dialogue offputting for either its crudeness or how eye-rollingly over-affected it is. And if that’s not enough, there’s plenty more over-baked psychoanalyses of Michael, again taking a journalistic, probing approach to the antagonist despite it contradicting the uncertain terror of the original Carpenter movie.

But worse than all these things is that Halloween II is simply boring. Not even the kills, shot with obnoxious shaky cam in poor lighting conditions as they are, can muster much interest, and whether you watch the theatrical edition or the Unrated cut, the ending is staggeringly lame (especially the latter one).

Not merely content to make a bad Halloween sequel, Rob Zombie dares to steer the franchise into pretentious territory.