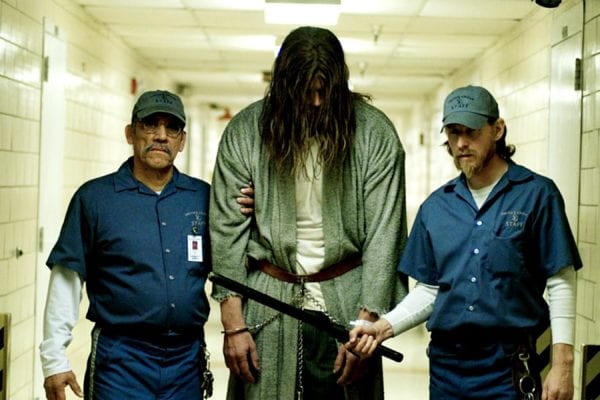 Coming as it does in the wake of at least three terrible Halloween sequels, this “reimagining” of the original movie deserves some credit for both its ability to be taken seriously and for not simply fashioning a straight remake of Carpenter’s 1978 classic.

There are certainly some intriguing ideas here, and Rob Zombie is nothing if not a bold, singular filmmaking voice to take command of the franchise, but his ugly riff on the Michael Myers legend is ultimately a sloppy mess of ideas that never fully coalesces.

The first act of the movie is divisively devoted to Myers’ origin story, with a brilliantly-cast Daeg Faerch portraying young Michael even if Zombie makes the unfortunate choice to over-explain his genesis, by literally having Dr. Loomis – a similarly terrific Malcolm McDowell – spoon-feed the audience rote pop-psychology. By trying to make the viewer empathise with Myers, the movie veers sharply away from the original’s depiction of Michael as a transient embodiment of evil.

Though the literal physical conception of Myers works just fine – Tyler Mane is huge – Zombie ends up striking an offputtingly crude, vulgar tone from minute one that’s not even enjoyable in the “I want to take a shower after watching this” sense. A sequence in which a trucker, played by the legendary Ken Foree, is violently murdered by Myers while taking a dump is just the wrong kind of gross. The Unrated Edition, which I screened for this review, is especially unpleasant, featuring a pointless, extended rape sequence as Myers escapes the asylum, and at this point we’re only half-way done.

To his modest credit, Zombie did amass a pretty impressive supporting cast of horror legends and cinematic weirdos here, including his wife Sheri Moon Zombie as Myers’ mother (we get it Rob, your wife’s attractive), Danny Trejo, regular collar Sid Haig, Udo Kier and Brad Dourif.

There are certainly some compelling standalone scenes and plenty of solid gore, but it’s ultimately an over-indulgent canvas on which Zombie vomits his unfocused, often quite repulsive (and not in the good sense) ideas and aesthetics. In its 121-minute uncut form in particular, it’s too damn long, with the third act devolving into a dispassionate slasher slog bogged down by excessive shaky cam and a soul-drainingly drawn-out final standoff.

Rob Zombie certainly has a unique vision for the Michael Myers myth, albeit one that undermines the haunting ambiguity of Carpenter’s original.