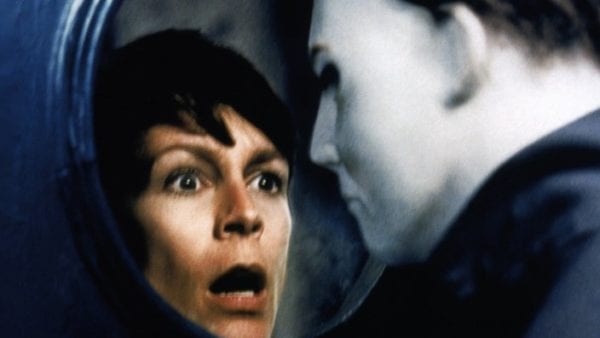 Halloween H20 is one of the earliest examples of a franchise soft-reboot, wiping the three prior sequels from the slate and positioning itself as a retcon follow-up to Halloween II, while sensibly bringing Laurie Strode back into the fold.

With Scream writer Kevin Williamson crafting the story and doing uncredited script re-writes, it’s little surprise that H20 feels very much like a Scream movie, with a more darkly comic, self-aware tone which, while undeniably cynical, still leaves it leagues ahead of the last three Halloween movies.

To a point, this is a smartly-made sequel with surprisingly impressive shot compositions by Friday the 13th director Steve Miner. The plot is kept simple and there aren’t any wacky cult rituals in sight – just Michael Myers confronting Laurie some 20 years after he first terrorised Haddonfield. While it’s certainly a little too goofy on occasion – the awkward shots of Myers composited into windows, the excess of jump scares and a painfully ham-fisted parallel to Frankenstein – it broadly works as a by-the-numbers slasher flick.

It also boasts the most bizarrely eclectic cast of all the movies, including Josh Hartnett, Michelle Williams (!), Joseph Gordon-Levitt (in a cameo) and LL Cool J to name just a few. None of them really leave a mark, though, and the movie lives and dies almost completely by Curtis’ terrific performance as a PTSD-addled, alcoholic Laurie Strode. Though the film perhaps luxuriates on Laurie’s struggles a little too long for its mere 86-minute run time, it results in easily the best piece of acting from the “original” run of movies.

Unfortunately this is rather at the expense of Myers himself, who spends long stretches of the movie off-screen and doesn’t really do a whole lot until reel three, perhaps in an attempt to steer away from the blatant schlock of the prior sequels. The climax itself is a bit of a bore until it boils down to just Laurie and Michael, though even this seemingly concrete end to the franchise is sullied by the sequel’s revelation that Laurie brutally murdered a totally innocent man.

The self-referential shtick – clearly a result of Williamson’s involvement – is also laid on a little too thick for its own good at times; occasional blasts of “Mr. Sandman” are fine, but the cameo from Psycho star Janet Leigh – that’s Curtis’ real-life mother, by the way – probably goes a little too far by placing the actress in the very same 1957 Ford Sedan she drove in Hitchcock’s classic. That’s not to forget the groan-worthy clip of Scream 2 visible on a TV at one point.

While sensibly brief and utterly classy compared to its horrid predecessors, H20 rarely rises above generic slasher fare outside of Curtis’ entertaining performance.