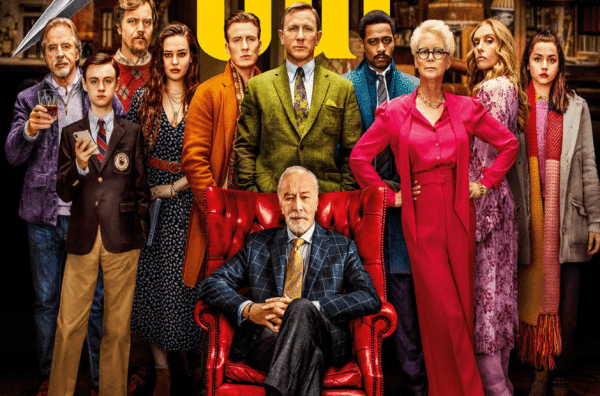 Rian Johnson, having survived the wrath of angry Star Wars fans, returns to our screens with a very different film from The Last Jedi. Moving away from a galaxy far far away and into the world of the old school murder mystery with his star-studded whodunit Knives Out.

So to mark this occasion, I’ve whipped up a nice helpful little feature taking a look at some classic cinematic murder mysteries.

So let’s all gather in the drawing-room and take a break from wondering what the Butler saw by taking a look at 4 Great Murder Mystery Films (That Aren’t Knives Out). If you’re going to talk about a mystery in which an eccentric but astute detective gathers together a band of strangers to accuse one of them of murder, then you can’t get any better than Agatha Christie’s iconic moustached Belgian sleuth Hercule Poirot. While many of Poirot’s exploits have been adapted for the big and small screen, for this feature, we’re going to take a look at one big-screen adaptation that is often regarded as one of the best, while also being one of the few screen adaptations that Christie herself approved of. This is Sidney Lumet’s Murder on the Orient Express.

Murder on the Orient Express follows world-renowned detective Hercule Poirot, having just solved yet another case, attempting to enjoy a relaxing trip through Europe aboard the titular train. When a passenger is murdered and the train trapped by snow, Poirot finds himself forced to investigate his fellow passengers in an attempt to find the culprit hiding among them.

Given that Murder on the Orient Express is among the best known of the Poirot books, if you’ve seen any other of the screen incarnations of the story then you know who the killer is. Yet, even if you do know who the killer is, Orient Express is still an immensely engaging and enjoyable murder mystery, with the much of the film’s strength drawn from the sheer fun of watching Poirot doing what he does best, methodically interrogating suspects, gathering clues, and putting together a case. The story is classic Christie, featuring a band of apparent strangers each with their own hidden agendas and backstories that only a Belgian sleuth can uncover, with the layers of secrecy being gradually peeled away to reveal some surprising connections, before everything is drawn together in a surprisingly well-constructed final reveal as Poirot unmasks the killer hiding among them.

The story’s tightly woven structure is compounded by the claustrophobic atmosphere as our motley cast of characters find themselves trapped within the confines of the train, the intimate nature of the carriages only serving to heighten the paranoia and suspicion.

The pacing is slow and deliberately so, with much of the film’s “action” consisting of long dialogue scenes as Poirot asks the right questions while proposing various theories about the murder, the murderer and the motives. While some viewers might find the pace too slow for their liking, I feel it works well, allowing the viewer to be drawn ever deeper into the mystery, soaking up the claustrophobic atmosphere and allowing them to play amateur sleuth as they try to solve the murder themselves. To tell his tale of murder, director Sidney Lumet assembles himself a classic all-star cast boasting the likes of Ingrid Bergman, Lauren Bacall, Anthony Perkins, John Gielgud, Richard Windmark, Vanessa Redgrave and Sean Connery among them, his superb direction allowing the actors to bring out their best, creating characters who at first appear rather loathsome, tragic or insufferable and revealing them to be much more complex and nuanced.

Out of the supporting cast, Bergman (who won an Oscar for Best Supporting Actress for her performance) is particularly brilliant as a tortured deeply religious Swedish missionary, with her being the most sympathetic of the suspects. Bacall, by contrast, provides some much needed comic relief as a loud brash American who can’t wait to regale everyone with the words of wisdom of her second husband who had a saying for everything. Yet, as with everything, appearances can be deceiving, something that the two screen legends, as well as the rest of the cast, pull off brilliantly.

The real star of any Poirot story is, of course, the Belgian sleuth himself brought to life by the late great Albert Finney in an Oscar-nominated performance. Finney is a joy to behold, perfectly capturing the various traits of the character, from the positive, such as his keen psychological insight and his charm, to his less pleasant qualities such as his arrogance and the often manipulative methods he deploys in the service of his investigations. Finney’s great asset is the way he balances these qualities, with the best moments being when Poirot is interviewing his suspects, being kind and delicate with one suspect while being more aggressive and domineering with another. Finney is a captivating screen presence and it is tremendous fun watching him shuffle back and forth through the train cars, drawing together his various observations and hypothesises, all while sporting a rather silly moustache and a ridiculous Belgian accent.

Thanks primarily to a stellar cast led by a stellar performance from Albert Finney, an engaging slow-burning mystery that keeps you guessing till the end, even if you know it already, Murder on the Orient Express is a classic Agatha Christie mystery and one that comes highly recommended. Check this one out.