As a proud card carrying Trekkie I have a fair few Star Trek books occupying far to much space on my bookshelves.  These range from your basic paperback affairs to full-on, in great detail, technical manuals, for I am really that much of a Trek Nerd. However, I really cannot help myself when something fascinating appears, and when I saw the Eaglemoss Hero Collector’s Star Trek: Shipyards – Starfleet Ships 2294 – The Future book I couldn’t let it pass. 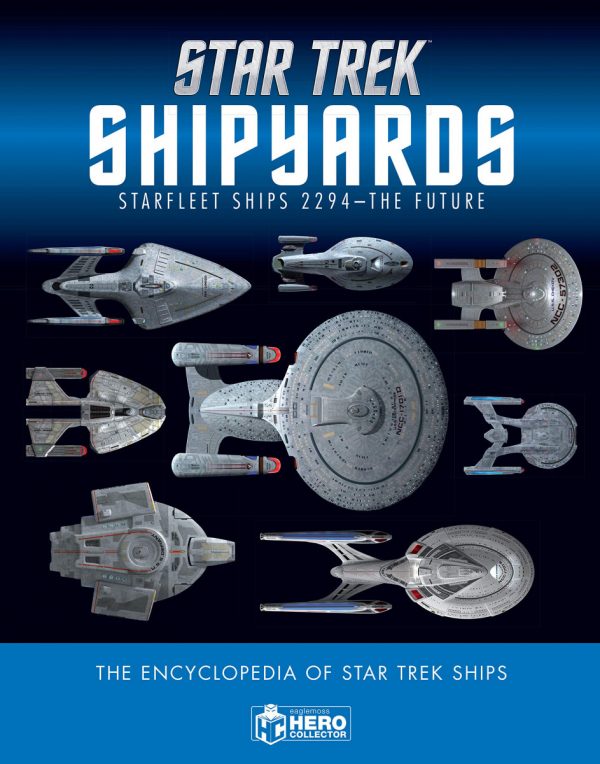 At just over 225 pages this full-colour, hardback encyclopedia of Star Trek ships – on initial flick through – will make you rather pleased you have picked it up, with ships instantly standing out, including the Raven, the Delta Flyer, the Stargazer, the Defiant, the Enterprise E, the Prometheus and beyond to the USS Relativity.  It’s packed with both Star and Timeships from Star Trek, every page is occupied with information and images relating to the ships we have seen traversing the galaxy, and nothing seems to be left out.

Separated into dedicated chapters from Small Transporters all the way up to The Future, Hero Collector has done a rather fantastic job in delivering both excellent profiles of the many ships within Starfleet, detailing along the way a few key components for the vessels and these have been married up rather well with some excellent images of the ships themselves.  This encyclopedia visually looks quite amazing. 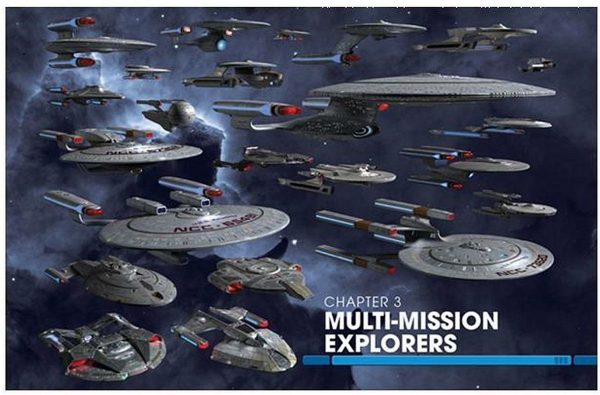 Running alongside each and every ship within the book is both the story behind the vessel and also a small handful of facts.  This is where the book becomes rather interesting indeed. It’s fascinating to read how quickly Starfleet rapidly lost ships during both the Borg conflict at the Battle of Wolf 359 and of course during the many battles as the Dominion War raged on.  It was mainly the Dominion War that saw some of Starfleet’s strangest looking vessels emerge, as they salvaged what they could to rapidly build new ships. So we saw the USS Centaur, which had the nacelles for the Excelsior Class and the Main Bridge from the Miranda Class, or the USS Curry which saw the Excelsior Class harvested again but its design was certainly something to be seen.

Where the book doesn’t stray into is the highly technical side of things.  Star Trek Shipyards: Starfleet Ships 2294 – The Future, steers clear of delivering details on the inner-workings on how the Warp Drive ticks or how the Replicators know what “Hot” is exactly.  This book isn’t for those that want the finer points of each ship, it’s more of a book for those that appreciate the look and history of each ship.

In amongst the amazing artwork and pages upon pages of background lore; between each chapter there’s a fascinating look a size comparative chart for each ship.  Here I was taken aback by two ships and their sizes and I’m not talking about the ridiculously sized Enterprise-J, though that on the size chart was rather amusing.  No I’m talking about the Raven and the Prometheus. The Raven is 90m long and the Prometheus is 126m long! I had always believed that Starfleet’s wonder ship was on a similar scale to Voyager, but no – it’s not even half the size of Voyager.

There honestly isn’t any negatives found within the covers of this book.  My only minor moan is directed at the rather small TV stills found within the book, which attempt to show you when the ships were seen in action.  These are often difficult to actually find the real detail in, mainly the ship in question, and at only approximately 2 inches square I felt like I was having to take Hero Collector’s word for it.  Honestly, we could have really done without these little boxes.

One thing I have to say that made me laugh while reading the book was discovering that the USS Curry was part of the Second Fleet and another ship in the fleet was the USS Raging Queen, named after Michael Palin’s Pirate ship when he appeared on SNL.  I was left wondering if Michael Palin is aware that his Raging Queen had been taken into the furthest reaches of Outer Space.

Hero Collector’s Star Trek: Shipyards – Starfleet Ships 2294 – The Future is a brilliant looking Star Trek book and one that is worthy of belonging on any Trekkies bookshelf.  Don’t expect highly detailed technical specs, but do expect some excellent artwork showing some of Starfleet’s finest vessels.