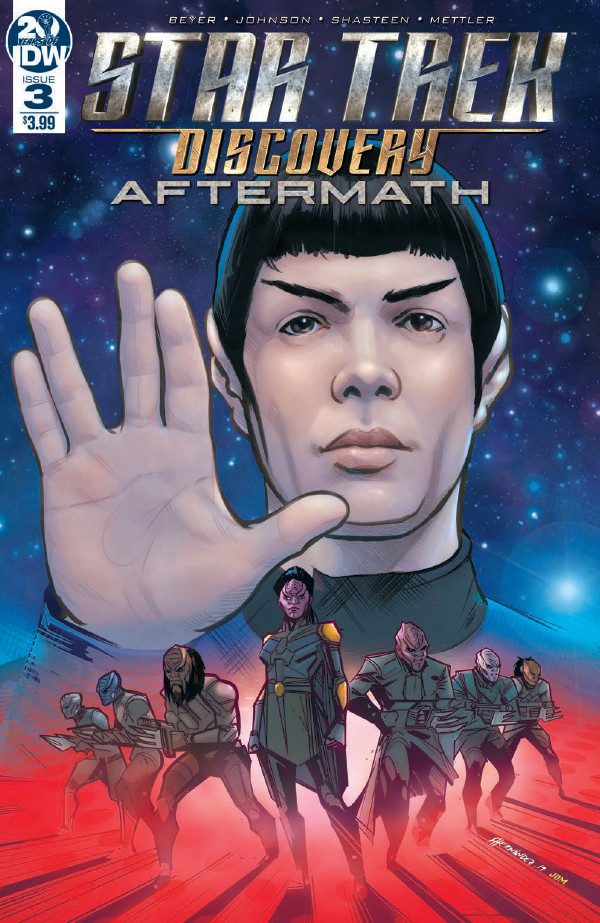 And so we come to the end of this brief three-issue Discovery/Pike Era Enterprise jaunt from Mike Johnson and Kirsten Beyer.   Here’s hoping that IDW have seen enough of an interest to commission more adventures of Captain Pike, bringing them into their ongoing Star Trek library.  Though, hopefully, they’ll try not to shoehorn more tales in during the brief moments when one person entered a room and another left.

With L’Rell being held as an enemy of the Empire by the faction of disgruntled Klingons calling themselves the Shadows of Kahless, the Federation/Klingon Peace Treaty is rapidly moving further out of sight.  Elsewhere upon the frozen planet Vaset III, Spock is carrying the wounded Pike to safety before he can secure help from the Enterprise for both his injured Captain and the delegation. Though following a mumbled command from Captain Pike, Spock’s orders are directed away from the Enterprise and to rescuing the Mother of the Empire.

In my ageing Star Trek opinion, as you’ve hopefully read in my previous two reviews, I’ve felt that both Beyer and Johnson jamming Aftermath into this specific moment of the Trek timeline was rather superfluous, and it could have easily arrived on a later voyage. It’s been a bone of contention for me – why it was felt like a good place to cram in a Klingon/Federation Peace Treaty when they could have easily placed this as an ongoing adventure elsewhere somewhat baffles me.  “In those brief minutes at the end of Discovery – Such Sweet Sorrow Part 2, did you wonder what Spock did before he shaved off his beard!?”.  “No, not really!  I assumed they thanked their lucky stars Control was no more, Spock pondered Michael’s parting words and then he popped off for a quick trim!”

Though I’ll be the first to admit, come the second issue of Aftermath the story certainly did pick up, here in the third issue it unfortunately couldn’t carry on running with the pace it had just previously gained.  Though stumbling here in the final issue, it was truthfully great seeing the mighty Kor in the closing panels. Hopefully we’ll be seeing more of the noble warrior in the future adventures.

Perhaps this should have been a four issue series, as come the conclusion I had that ‘Is that it!?’ thought whispering within my mind and that is something you don’t really want with a Star Trek comic book – especially with Mike Johnson and Kirsten Beyer pushing the pen.  The pay-off with Spock and L’Rell seemed like a bit of a damp squib, Pike insisting Spock save L’Rell on his own without the Enterprise’s help, a Klingon Shuttle plowing into a mountain at impulse speed – all these combined with a hasty finish didn’t make for a great closing issue.

Add on top of this artwork from Tony Shasteen and colours from J.D. Mettler, which unfortunately within this issue really don’t look good at all.  From characters that look simply layered onto panels, to the recurring morphing faces. The look of the final issue of Aftermath really isn’t a good one.

It’s a shame really that Star Trek: Discovery – Aftermath #3 didn’t continue to build on Issue #2.  Though it has to be said, there were glimpses of the camaraderie between this Enterprise crew in the previous issue and slightly here, so I do have firm hopes that we will see a strong Pike & Co Enterprise comic book series in the future.