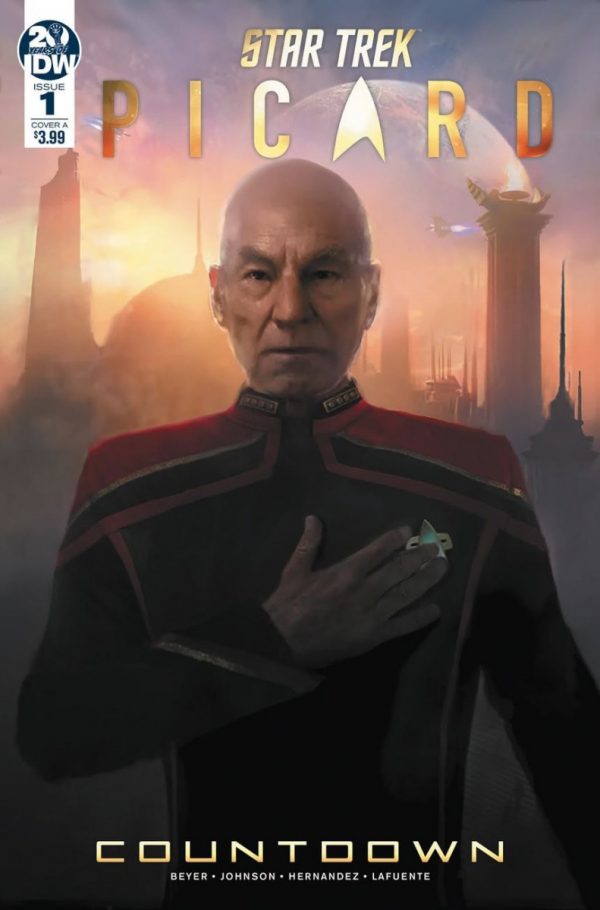 It’s bizarre to think that a decade ago Mike Johnson, along with Tim Jones, put pen to paper and wrote Star Trek: Countdown.  In doing so they ignired the fuse – which admittedly has burnt slowly – but has now bloomed with Star Trek: Picard – Countdown, which is penned once again by Mike Johnson and joining him this time is known Trek writer of novels, comic books and television Kirsten Beyer.  This of course is directly leading into the highly anticipated upcoming Star Trek series Picard from CBS All Access. What an amazing journey from one comic book some ten years back.

We open with Admiral Picard onboard the USS Verity, liaising with Commander La Forge as both lead on the mass evacuation of the numerous Romulan settlements, under the careful gaze of the Romulan Empire.  All seems to be going as well – as well it possibly could be with the threat of a supernova looming across the lives of billions of souls. That is until the Romulan Empire reveals Yuyat Beta, another one of its numerous ‘secret’ locations within its borders, which previously didn’t register as needing over 10,000 Romulans evacuating.

With the Admiral warping rapidly over Yuyat Beta to evaluate the situation, he’s first met with an open door greeting, until he discovers what the inhabitants of this previously unknown Romulan outpost intend on leaving behind.  With Picard protesting, his plans for evacuation are forcefully placed on hold.

It’s honestly like Star Trek: The Next Generation hasn’t been away! Truly, I’ll be the first to admit I was a wee bit worried on what may have been delivered with the upcoming Picard comic book.  Granted, I’ve had my faith in Johnson and Beyer bolstered many times, so there was truthfully no real worries here, but I was a tiny bit weary on actually opening the pages of Star Trek: Picard – Countdown.  Was it going to be a fluff piece? Was it going to be retreading a tired story-arc? What I didn’t expect was to enter this Picard story running, with everything already happening around us, whilst at the same time the core feeling of TNG still flowing around this rapidly moving tale.

Without missing a beat from Star Trek: Countdown and before the inevitable catastrophic supernova, here’s Picard, La Forge, a new ship and a new crew, and also a mention of Riker and Troi on the Titan.  Not only this but a real story is unfolding within issue #1, and both Kirsten Beyer and Mike Johnson have already delivered something brilliant by just setting the stage.

Making all of this come together falls to the amazing artwork of Angel Hernandez and colours for Joana LaFuente.  Both have given this Star Trek comic book a touch of the classic Trek art, whilst blending in today’s modern artwork additions.  With the pencil-like shading applied, and then the colour wash-overlays, both artists marry up perfectly here in this release.

Star Trek: Picard – Countdown is just brilliant!  Already both Mike Johnson and Kirsten Beyer have captured everything that was fantastic about Star Trek: TNG and delivered just a taster in the opening issue.  Add on top of that the magnificent Star Trek artwork from both Hernandez and LaFuente and you have here one excellent comic book.