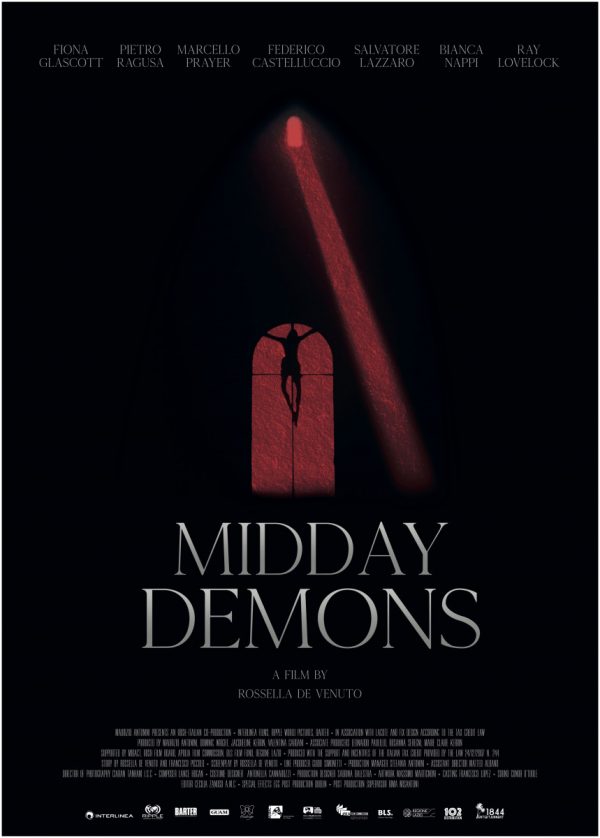 Megan, a successful Irish artist, lives in Dublin with her husband Leo, an Italian who emigrated there several years ago. After receiving the news of the death of Leo’s uncle, a powerful catholic priest whose death has prompted a campaign for his beatification, the couple travels to Apulia, in southern Italy, to handle Leo’s unexpected inheritance. Midday Demons relies on the scenic “table-setting” of coastal Italian architectures, but lacks enough enthusiasm in storytelling to shine a light on the next “sunny scary” classic. Enduring heat, hidden ancestral secrets, and religious questioning bake an otherwise dry vacation thriller that dares challenge the Vatican’s cloth. A story of isolation and outsider hazards that does little with barely bite-sized paranormal teases. Short bursts of “terror” overtaken by tragic flashbacks and motivations that’ve been showcased on more engaging levels of genre provocation.

Fiona Glascott plays Megan, an Irish artist who accompanies her husband Leo (Pietro Ragusa) back home to southern Italy. The death of Leo’s uncle, Monsignor Domenico (Salvatore Lazzaro), unites his family as they decide what to do with their newly inherited palace. Megan’s inspired by her Apulia surroundings, but lucid visions and sickness suddenly plague the pale visitor. Could searing heatwaves that drive residents into their homes during the day’s most blazing hours be to blame? Or does Leo’s new abode hold a more sinister secret?

The hazy, almost hallucinatory effects of Apulia’s spiked temperatures are supposed to create an air of disbelief around Megan’s breakdown, never effectively conveyed. Horror’s sweatiest environments – films like The Noonday Witch and The Hills Have Eyes – enrage the disorienting effects of sunstroke. Megan’s “possession” (of sorts), in comparison, is by the books despite Glascott’s commital – aping tropes such as penciling unknown images of atrocities past to imagined sand crabs zig-zagging around Megan’s room. It’s never more than fleeting discomfort, even as ghostly gals appear for a second’s glance. Same for “shadows” that haunt still photography. All stuffily executed, mind you. 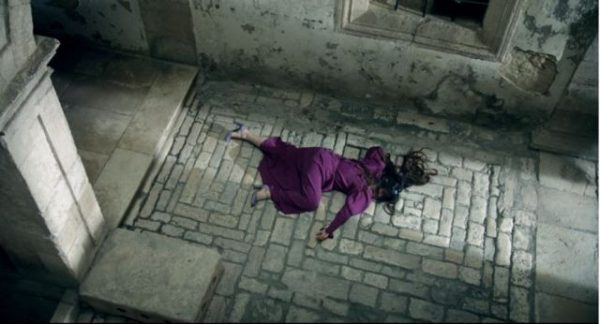 As Leo’s family “accepts” Megan, she upturns her nose without pause (immediately chastising a smoking pregnant relative). Megan is put at odds, soon investigating Leo’s past in (somewhat) stealth. Monsignor Domenico’s consideration for sainthood brings a holy evaluator to town who “gets too close” when paired with Megan’s findings, unraveling tales once brushed under the proverbial rug of life only to climax without intended suspense. Montages of document scouring and clue sniffing come to a bloody head but the payoff, once again, mimicks countless archived examples of horrors past.

Italian filmmaker Rossella De Venuto’s strength in Midday Demons is framing Italian landscapes, particularly from Megan’s point of view. Cinematography that makes spatial usage of cobblestone streets and forgotten catacombs beneath stone mansions. Directorial vision favors thematic importance and commonplace values in Italian life – tracing Leo’s bloodline back to Domenico’s hayday – only her characters struggle to stand out as protagonists being tormented by their surroundings. Afflicted by climate, or thrown by family members who clearly know more than they’re letting on.

These beats, ones we’ve seen over and over, never compose more than a familiar genre tune. The beautiful wife who doesn’t quite fit in. The family history that threatens to tear a marriage apart. The clueless husband who plays soccer while his loved one is home vomiting on the floor and yelling “crabs!” at empty space. The investigative priest who threatens everything, the curiously suspect deaths, the ambivalent performances – it’s the kind of narrative that’s completely forgotten once credits roll because how can you separate from so many other comparative equals? 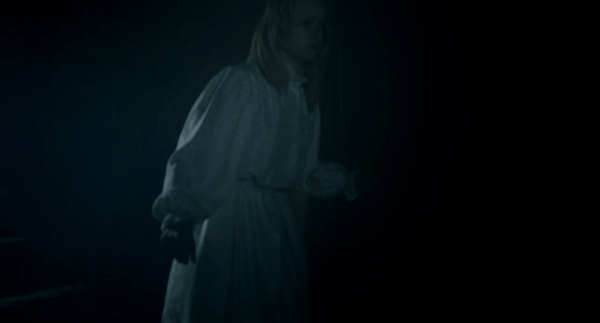 A title such as Midday Demons suggests far more demonic influences upon homelife horrors. Rossella De Venuto invites us into her Italian culture with sights to show, but objectively gorgeous camerawork doesn’t excuse the film’s flattened tone. A laundry list of European auteurs are owed their homage credits, if only in formulaic expression. Midday Demons leaves me wishing I’d been driven a bit madder by De Venuto’s boiled and sunburnt homecoming, merely pedestrian as far as spooky reunions are concerned.