With The Mandalorian set to premiere this coming week, we take a look at Lucasfilm’s early attempts to bring Star Wars to the small screen, beginning with the Star Wars Holiday Special from 1978… 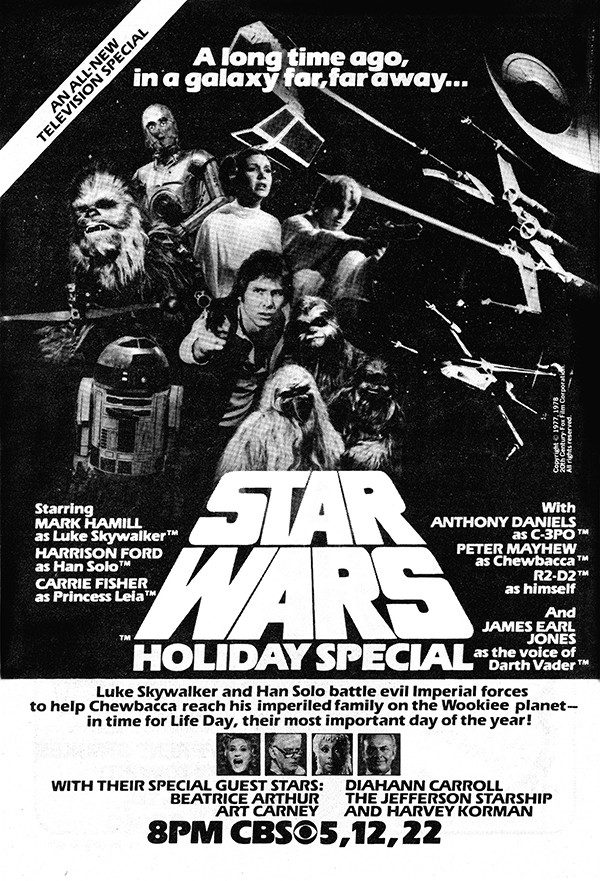 “If I had the time and a hammer, I would track down every copy of that programme and smash it”, Star Wars creator George Lucas is alleged to have commented about his first foray into television, the universally derided Star Wars Holiday Special. Whether the quote is accurate or not, the end result must surely prove to be one of the biggest regrets of his illustrious career. A combination of rehashed footage from the original movie, sloppy new scenes and variety performances (including comedy and song and dance routines), the two-hour farce received but a solitary airing in November 1978 that cemented its place as the most infamous entry in the franchise, if not the entire history of television.

“[It] didn’t really have much to do with us,” the filmmaker commented on the origins of the special. “I can’t remember what network it was on, but it was that thing they did. We kind of let them do it…we let them use the characters and stuff and that probably wasn’t the smartest thing to do, but you learn from those experiences.” The network in question was CBS, who were naturally looking to capitalise on the stellar success that Star Wars had enjoyed in cinemas. Executive producers Dwight Hemion and Gary Smith were tasked with overseeing the project and while Lucas may have since washed his hands of responsibility, he is said to have contributed the initial story in addition to attending a number of production meetings. 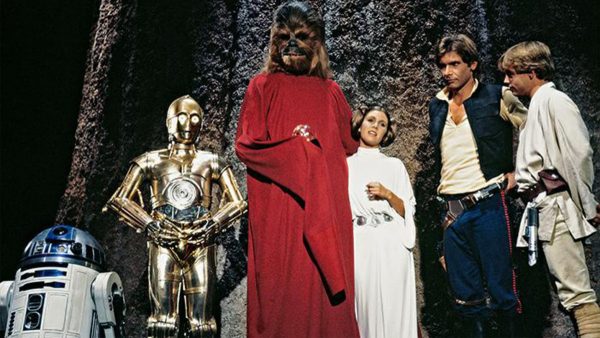 With pre-production underway Lucas’ former USC classmate David Acomba was brought in to direct only to resign shortly thereafter citing creative differences, a decision backed wholeheartedly by the series’ creator. Acomba was replaced by Steve Binder (whose television credits include the Elvis ’68 Comeback Special), while writers Pat Proft (Police Squad!), Leonard Ripps (Frankenweenie), Bruce Vilanch and Rod Warren (Donny and Marie) were hired to turn the concept into a full-length feature special. Husband and wife composers Ken and Mitzie Welch were responsible for the musical numbers (with Mitzie also receiving a writing credit), with other notable crewmembers including effects guru Stan Winston (who provided the Wookiee costumes) and Star Wars regulars Ben Burtt and Ralph McQuarrie.

While Lucas may have enjoyed the luxury of anonymity credits-wise and supporting cast members Peter Mayhew, Kenny Baker, Anthony Daniels and James Earl Jones were masked behind their characters, the same could not be said for main players Mark Hamill, Carrie Fisher and Harrison Ford (who, when asked for his thoughts on the special by talk show host Conan O’Brien, joked that it “doesn’t exist”). Their phoned-in performances alongside Bea Arthur (The Golden Girls), Academy Award-winning actor Art Carney (Harry and Tonto), comedian Harvey Korman (The Carol Burnett Show) and seventies rock band Jefferson Starship do little to salvage the train-wreck and simply add to the embarrassment. 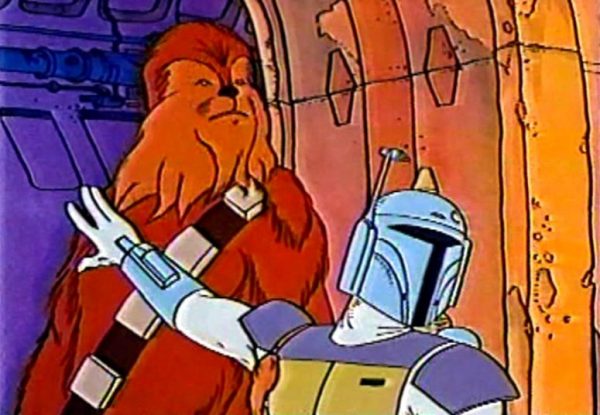 In addition to live-action segments that include a number of Chewie family soap opera scenes (many of which are dialogue free for extended periods) and a singing Princess Leia, The Star Wars Holiday Special is notable for the inclusion of an 11-minute animated segment that introduces fan-favourite Boba Fett to the saga. In 1976 Canadian animators Nelvana Studios had released the half-hour special A Cosmic Christmas, which was brought to Lucas’ attention via his friend David Acomba. Lucas invited the fledgling studio to pitch an idea for the cartoon section and after being impressed by co-founder Clive Smith’s presentation, Nelvana were awarded the contract. Incorporating Lucas’ suggestions, the resulting animation entitled The Story of the Faithful Wookiee is perhaps the show’s only redeemable feature and ultimately led to Nelvana producing The Ewoks and Droids Adventure Hour on behalf of Lucasfilm.

The Star Wars Holiday Special received its only broadcast on Friday November 17th, 1978 and resulted in excellent viewing figures, although the response was far, far from complimentary and it has continued to attract severe criticism. Chewbacca actor Peter Mayhew may have been quoted on record as enjoying his experience and believing it to be “one of those things that Chewie and Star Wars fans would adore”, but the Holiday Special really is painful to watch. When asked by Maxim Magazine if he harboured plans for a Special Edition Lucas responded: “That’s one of those things that happened, and I just have to live with it.”

Unfortunately for Star Wars fans, so do we.