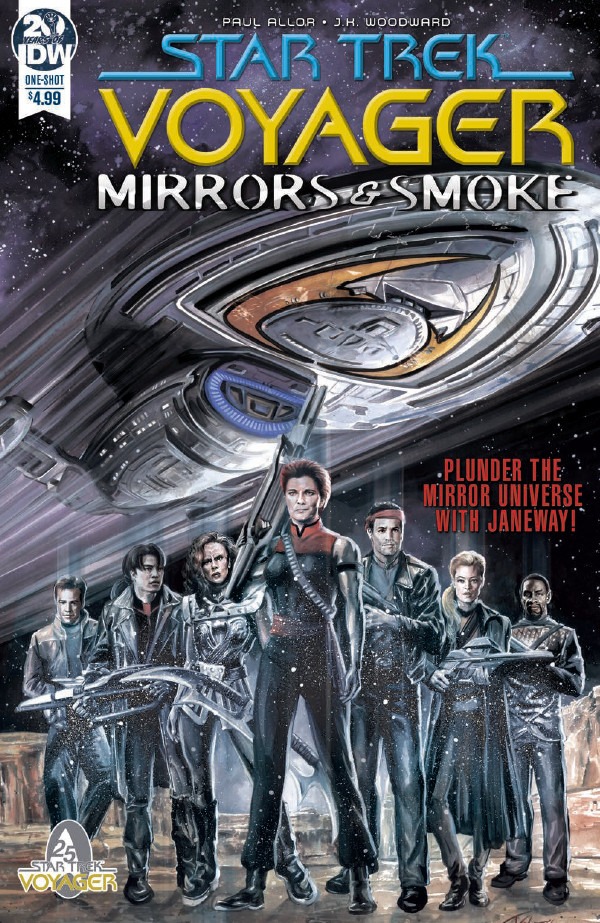 We’ve had for the past few years Star Trek (Kelvin Timeline), Star Trek: The Next Generation and Mirror Universe TNG comic books, we’ve even had a Starfleet Academy comic book series along the way.  Now finally after fifteen years we’re finally given a Star Trek: Voyager comic book and heartbreakingly it’s only a one-shot!

In Mirrors and Smoke, we join the I.S.S. Voyager and her fearsome crew in a heated battle, for a stray shuttlecraft, with the dreadship Baxial.  With some exceptional manoeuvres and venom-laced words traded between both crews, the lone occupant of the shuttlecraft is beamed aboard Voyager, and revealed to be Annika Hansen.

Explaining, within Sick Bay, that since the Borg attacked her parents’ craft as a child, Annika been on the run ever since she.  Shocked to discover her saviours have yet to encounter the terrifying Collective, Annika is left in the care of the EMH. It’s not long afterwards that vital systems begin to fail upon Voyager and the paranoia begins to point towards their newly rescued traveller.  However, it seems that not everyone on the I.S.S. Voyager is fond of their current situation.

It’s rather excellent having a Star Trek: Voyager comic book, though truth be told I would have honestly preferred a Federation universe U.S.S. Voyager release.  To perhaps see the moments we missed on their journey home, or adventures not covered in the televised show.  Granted we did get a “Mirror, Mirror”-like episode during Season 4, with the episode titled “Living Witness”, which magnificently showed off the “supposed” wicked side of the Voyager crew, but I honestly prefer – obviously from around mid-Season 2 – well… Voyager.

Still, we should never look a gift horse in the mouth and IDW Publishing has delivered us two experts in their field, Paul Allor and J.K. Woodward, for this comic.  Both know their onions when it comes to writing a good story and of course some excellent Trek inspired artwork. So to be able to read a Star Trek: Voyager comic book – presented by both – is quite brilliant.  It’s clear that both are more than well-versed in the source material and have had fun corrupting friendships, breaking developed characters and destroying everything holy about Star Trek.

It’s the little things in amongst the big things that make this comic book rather special.  Woven throughout the great artwork, from J.K Woodward, you’ll find Paul Allor’s wicked world rapidly being built and his skills as a writer here really shine.  One of the small, but mighty changes from the pen of Mr. Allor was giving the once confident Tom Paris and very noticeable stutter. 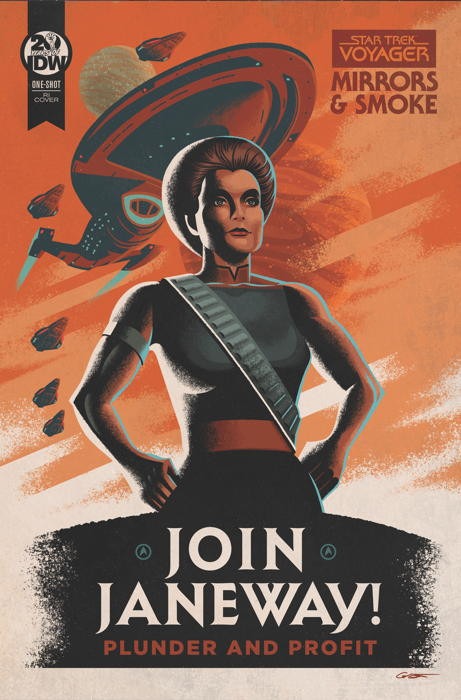 It has to also be said that George Caltsoudas’ retailer incentive cover is absolutely fantastic too.  If you get the chance to pick-up both copies, George’s “Janeway Propaganda” cover is magnificent and it should be made into a purchasable poster by IDW Publishing.

Star Trek: Voyager – Mirrors & Smoke has been worth waiting for.  It’s just a shame that it’s a one shot, as the cliffhanger we’ve been left with is just unfair.  Also, I would honestly love to see the further adventures of Star Trek: Voyager arrive upon the pages of IDW Publishing.  With Netflix letting the Trek fanbase know that this once underdog is now the most popular Star Trek show being watched on their streaming service, this must be a good enough reason to test the waters with a limited series at least?