Martin Carr reviews Part One of Crisis On Infinite Earths… 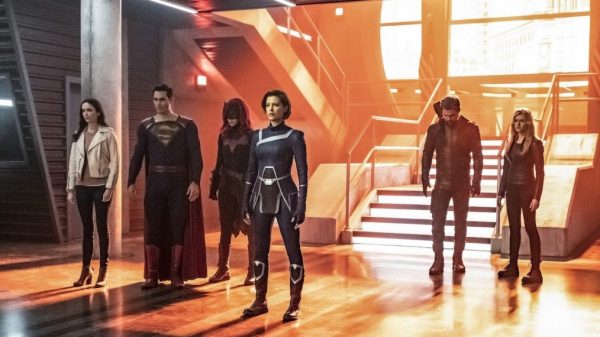 Featuring a plethora of characters from across numerous properties this opener sets up imminent threat, multiple realities and enough fan favourite moments to keep you guessing. In a matter of minutes it jumps between various versions to touch base with differing deviations of our familiar heroes, before settling in National City. Gathered around a conference table sit the entire CW roll call facing off against insurmountable odds which could result in total annihilation. Spread across four interlinked episodes which conclude in January next year, Crisis has turned into event television on a major scale.

Strangely for those who only watch a few of these programmes the interest is still there. Purely because there is a kitchen sink approach which is employed that works surprisingly well. By throwing everything they have at a specific series of episodes, whilst tying up certain narrative loose ends Crisis is entertaining without feeling overwhelming. Unfortunately as engaging as things are you do miss out on certain character moments purely by being out of that loop.

Other drawbacks include a loss of emphasis on show specific dynamics which are toned down to focus on the bigger picture. Whereas the numerous cameos which have gained in credibility over the years add another dimension and make up for those shortcomings. What also happens is reduced screen time for all concerned as numerous superheroes jockey for position. Despite the varied team ups which happen across this initial episode there is a sense that these diversions are merely padding. Small character moments which add little to the overall arch of events. A sense that these writers were struggling to find things for everyone to do.

However putting all that aside this is still grandstanding stuff which allows Benoist, Harewood and Leigh to shine in spite of two Supermen, two Arrows and a Batwoman. With bombs dropping, planetary evacuations being hindered and time portals in full affect Crisis promises disruption, danger and superhero shenanigans aplenty. As cliff hangers come thick and fast these antes are being upped exponentially. Meaning that lives and deaths hang in the balance making the expectations of part two nothing if not interesting.