With Gremlins returning to UK cinemas this week, George Nash takes a look at how its satire remains timely, over three decades on… Thirty-five years on from its initial release, few films have come to epitomise the notion of not judging a book by its cover quite like Joe Dante’s iconic ’80s cult creature comedy, Gremlins. Beyond the metamorphosis of its eponymous beings, from cute, cuddly, docile fur balls to grotesque, destructive, reptilian monsters, the movie, and its surrounding controversies, remains one of cinema’s most memorable surprise packages.

Returning to UK cinemas this week in swanky 4K, there remains much debate over just what kind of film Gremlins is. With its festive setting and an Executive Producer in Steven Spielberg, Dante’s film has all the hallmarks of a family-friendly, feel-good feature. Yet, the reaction it met upon release in 1984 — a wave of criticism from angry parents claiming their young children had been left mortified by several of its more disturbing scenes — suggested it was a different beast altogether. After receiving a similar pummeling from viewers in the wake of Indiana Jones and the Temple of Doom earlier that year, Spielberg used the backlash against Gremlins to help push the Motion Picture Association of America (MPAA) to create a entirely new rating, something that sat between a PG and an R, which would ultimately become the PG-13 Rating. The parents had a point. Underpinned by many of its most recognisable tropes and imbued with references to several of its landmark films (among them Tobe Hooper’s Texas Chain Saw Massacre, Don Siegel’s Invasion of the Body Snatchers from 1956 and Ridley Scott’s Alien), it’s difficult to dismiss the horror genre’s heavy influence over Gremlins. But, of all the film’s memorably macabre moments — which, even after trimming down Chris Columbus’ reportedly much darker original script, include the eponymous beasts exploding in microwaves, morbid monologues about dead dads dressed as Santa decaying in chimneys and elderly women being flung to their death by malfunctioning stair lifts — in 2019, it’s the sight of Dante’s titular creatures, gathered in their hundreds, wreaking havoc on the streets of small-town America that is perhaps its most pertinent.

Released six years after his seminal zombie flick, the anti-consumerist prints of George A. Romero’s Dawn of the Dead are smeared all over Dante’s film. Against a backdrop of material goods and unapologetic product placement — everything from Coca Cola to Burger King to nifty nods to Spielberg’s own back-catalogue — Gremlins sets up a neat subversion of its Christmas setting that, more than three decades on, loses nothing of its stinging critique of consumer culture. 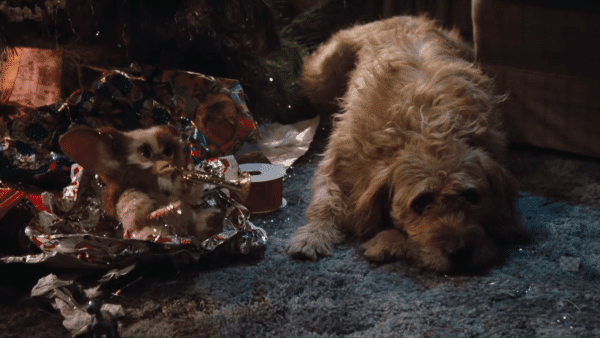 Goods, be it cars, homemade gadgets or strange furry creatures purchased from an old antique store tucked away down the backstreets of Chinatown, are everywhere in Gremlins. Kingston Falls, the film’s snowy, Frank Capra-inspired setting, is a small town rife with big city materialism.

The home of the film’s central family, the Peltzers, is awash with all manner of wacky machine and prototype. With the Peltzer abode being something of a stand-in for the home of the contemporary consumer, not only are the appliances totally needless, but, as part of a gag that runs throughout the film, prove utterly useless for their intended function – the punchline being, ironically, that only when the house is under siege from vicious, destructive monsters do they actually show any worth at all. In 2019, an age of stylish food processors, trendy blenders and spiralizers, it’s a joke that continues to land rather effectively.

Elsewhere, there are equally sharp jabs at those who view money as the sole motivation: from the wannabe millionaire-by-30, who confidently assumes wealth alone will land him a date with Phoebe Cates’ bartender Kate (but is promptly shut-down), to the repulsive Mrs Deagle (Polly Holliday) who, aside from wanting to torture and murder a dog, has a cat named “Dollar Bill”. 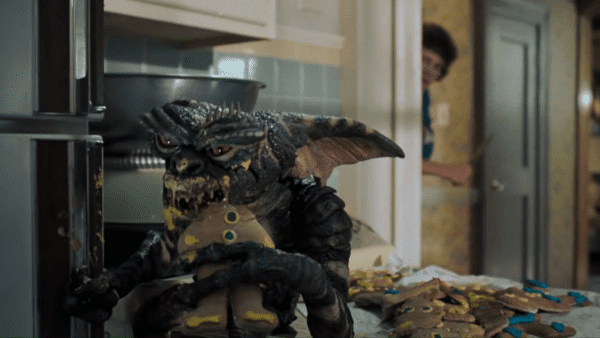 What seems to have aged less well, however, are the attitudes of the Peltzer’s next door neighbour, Mr. Futterman (the late, great character actor, and Dante regular, Dick Miller). His constant berating of the influx of foreign, and therefore inferior goods, which, in 1984, will have undoubtedly been written as the throwaway comic relief (the character is also reprised in the sequel), in 2019, feels altogether problematic, and draws rather uncomfortable parallels to the xenophobia still rife in modern America, bolstered in no small way by the aggressive patriotism of the Trump administration.

It is the titular creatures — the product of Chris Wallas’ memorable creature design — who carry the film’s greatest anti-consumerist sentiment, however. Running against the thematic grain of its Exec. Producer’s most entertaining works — that sees the extraordinary, the extra-terrestrial, invading sleepy American suburbia before proving the catalyst for profound change in the story’s human characters — it is the Gremlins who, over the course of the film’s 106-minute run-time, undergo the most significant transformation. 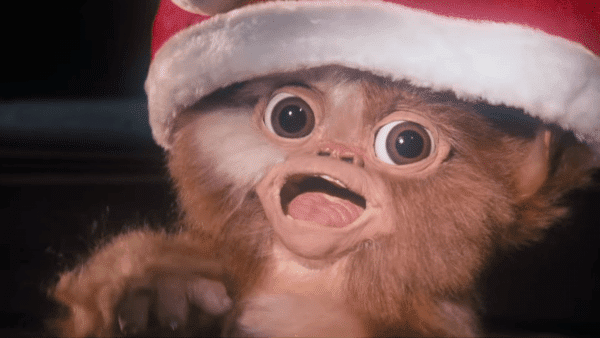 There is, of course, the physical shift — the result of not adhering to the the film’s famous, and famously flawed, three rules. But a far greater transition occurs allegorically. At first, Gizmo and co. represent the next best thing: a furry fad that, in today’s thriving market for exotic pets and the ever-increasing presence of fluffy, four-legged stars online, feels as timely as ever. “I’ll bet every kid in America would like to have one of these” muses struggling inventor Randall Peltzer (the late Hoyt Axton) — the film’s narrator and father to teenage protagonist Billy (played by a fresh-faced Zach Galligan). In purchasing the mysterious Mogwai, Randall channels the cultural ignorance of the Western consumer, so concerned with discovering the newest trend he chooses to ignore (or, more likely, is totally obvious to) the inherent threat they carry — “Mogwai” translates from Chinese mythology as “demon” or “evil spirit”.

But where Dante’s sharp, scaly satire cuts deepest though, is once the Gremlins complete their striking, grotesque metamorphosis. As appearances change, so too do behaviours — ones that start to mirror our own consumer habits. With the annual Black Friday deals set to bring about yet another wave of eager shoppers flooding the doorways of high streets up and down the country in search of the best bargain (not to mention the frantic online ordering), the raucous, gluttonous tendencies of Gremlins‘ agents of chaos invoke a feeling of alarming relevance. They trash shops, run riot in movie theatres, gorge on popcorn and chew at film reel (quite literally, consuming content) without a second thought. They are a mindless mass of green, greed and anarchy whose worst tendencies are brought out best when rampaging down the streets and through the shops aisles of Kingston Falls. It is hardly surprising then, and of little coincidence, that Gremlins‘ frenzied finale takes place in a department store. 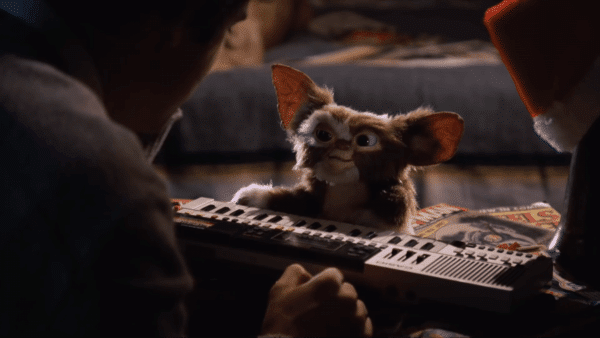 In 1984, a year made famous in popular culture by the threat of Orwellian totalitarianism and evil, futuristic corporations sending killing machines back in time to snuff out resistance leaders before they’ve even been born, a group of lizard-like puppets might have just predicted the future more accurately than any of them. “There might just be a Gremlin in your house” Randall’s voiceover delivers the movie’s final line as the screen fades to black. Over three decades on, it remains a searing ending statement. There might well be a Gremlin in your house. And that Gremlin might just be you.