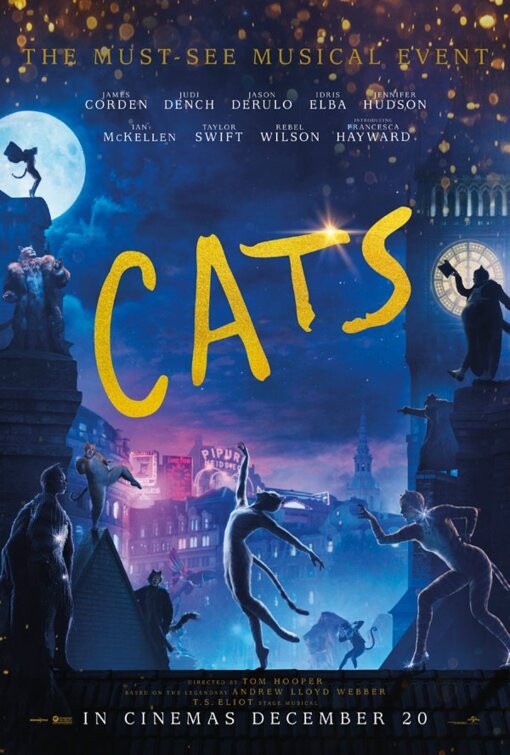 A tribe of cats called the Jellicles must decide yearly which one will ascend to the Heaviside Layer and come back to a new Jellicle life.

The film’s marketing campaign has of course been a fraught one, with even devotees of the source material expressing their horror at Hooper’s decision to have the live-action performances of his oddly distinguished cast “enhanced” with digital feline effects.

And now that the film is finally out in the wild, we can all feast our eyes – or not – upon what is surely 2019’s most beguiling big-budget calamity; a project comprised of so many committedly wrong-headed decisions that, in the very least, it’s something you won’t forget any time soon.

To speak of Cats’ narrative is to say little, because as even ardent fans of the musical will admit, it cuts a thin figure. On the streets of London, various cats attempt to convince an elderly, ethereal cat named Old Deuteronomy (Judi Dench) to pick them to ascend to a heavenly plane and be reborn. Or something. What passes for a plot here is treated with such dismissiveness it hardly begs the audience to care. Cats is a 110-minute movie entirely concerned with various elaborately-dressed and ridiculously-monikered humanoid cats announcing themselves with equally elaborate and ridiculous song-and-dance numbers. It is a glue-sniffing fever dream of a movie, and one that, in the very least, held my bemused attention throughout.

This is a film where Taylor Swift, as troublingly sexy feline Bombularina, announces the arrival of her cohort – the movie’s closest approximation to a villain, Macavity (Idris Elba) – by roofying a room of cats with catnip. The goal, it seems, is to incapacitate as many cats as possible so that Macavity might have less competition while vying for Old Deuteronomy’s attention.

There’s also an earlier scene where goofball kitty Jennyanydots (Rebel Wilson) awkwardly writhes around a room before introducing the audience to her mouse prisoners, realised here as an abominable combination of CGI mouse and children in performance capture leotards. That’s not to forget a Lynchian nightmare of a moment where Wilson’s cat starts munching on the cockroaches residing in her abode, similarly achieved through a deeply offputting mix of tangible human beings and ungainly digital effects.

And rest assured that all of the online hand-wringing about the film’s gleeful plunge into the uncanny valley has not been understated. In fact, much of what the trailers showed off was the visual best of what Cats has to offer. This is a film that feels a few VFX passes short of fit for commercial consumption; an in-progress cut a director would show to the studio a couple of months after principal photography had wrapped. But this is Cats in its final form – or near enough, because literally as I write this review, Universal has delivered a revised DCP of the movie to certain markets with “patched” visual effects. The version I saw on opening night, and one which I’m sure the “new” version isn’t much different from, isn’t merely a disastrously ill-wrought attempt to combine the human with the feline, but a genuine failure of CGI artistry at even an elementary level.

During dance sequences, performers’ feet frequently disappear beneath the blatantly green-screened floor or are poorly keyed into the environment, such that extremities randomly change colour depending on what else is happening in the scene. The result is embarrassingly shoddy for an expensive tentpole film from a major studio with so much top-shelf talent attached.

One can’t really ding the performers for their efforts here, though. They all seem to have joined the project with a love for the source material, yet their trust in the film’s central technical conceit was evidently hilariously misplaced. Surprising it is that Taylor Swift of all people ends up the MVP with her aforementioned “Macavity” number, which also benefits from the fact that Swift is one of the more convincingly anthropomorphic felines.

Jennifer Hudson is also fine as Grizabella, lending her usual barnstorming gravitas to a spirited rendition of the musical’s signature tune “Memory,” no matter how distracting Hooper’s relentless hold on her digital cat face might be.

Ian McKellen scarcely avoids embarrassing himself despite lapping milk from a saucer – you have to admire his gusto somewhat – and really the only putrid performances in the piece are those of Wilson and James Corden, the latter appearing as portly cat Bustopher Jones, whose screen time mostly involves him talking about his own weight and, well, being James Corden. Not good.

But even the decent performances and some of the better musical moments are entirely compromised by visuals that distract in all the wrong ways. Despite some solid production design flourishes, so many of the sets aren’t much more than garish prefab CGI backdrops onto which the performers are badly projected. Everything looks artificial, but not in an appealingly heightened or surreal way – though the film certainly is surreal – instead simply serving as a reminder of the film’s calculated, charmless artifice.

And yet I dare say Cats will by all rights become a Showgirls-esque rabble-rousing midnight movie in the future; its sheer aggressive weirdness and the fact it exists in this form means it can’t simply be dismissed and forgotten with ease. The so-bad-it’s-good crowd will find plenty to laugh at, for sure, and there are those who will enjoy it as a campy treat, even if its deeply schizophrenic tone desperately wants to insist otherwise.

By the time it all wraps up with a final sequence where Judi Dench breaks the fourth wall to directly address the audience in song, you’ll likely either give yourself over to its cackling lunacy or be left running for the exits. I cannot imagine there being an in-between on this.

Cats is a complete and utter artistic failure, if also fascinating enough in its awfulness to likely endure as a perversely-admired cult classic. It could’ve been worse – it could’ve been boring.