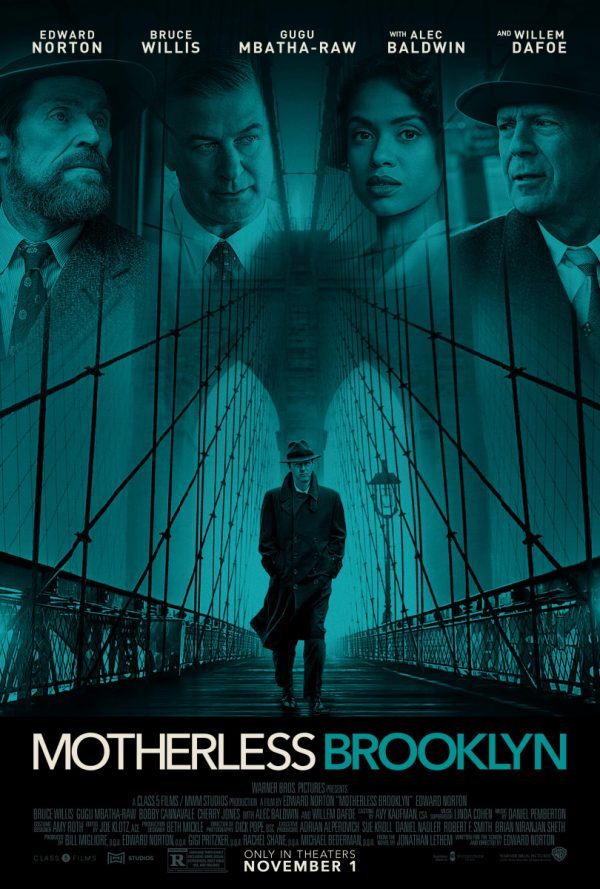 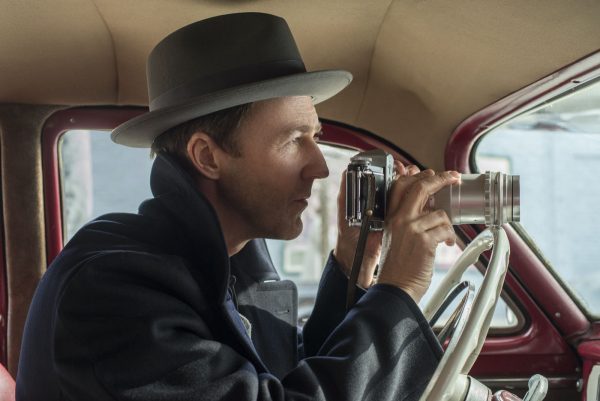 There are three Edward Nortons in Motherless Brooklyn.

The first, most familiar, Edward Norton is Edward Norton the actor, found here in the lead role. As Lionel Essrog, Norton offers a characteristically precise performance – every tic and spasm of the 1950s gumshoe’s Tourette’s syndrome meticulously recreated, in many ways the pinnacle of the careful affect Norton is known for as an actor. But to focus on the precision of the performance obscures its sensitivity. What might at first be written off as an ostentatious display of overly attentive histrionics, justified only by itself to itself, belies something much more tentative and tender. There’s a lightness to Norton’s work here, something gentle not lost in his formal dedication to the psychical neuroses; Lionel is rendered with vulnerability and treated in turn with empathy. There’s a depth beyond the superficially impressive imitation of the rhythms of Tourette’s – a crumpled, weary interiority suggestive of a man always slightly out of step with his surroundings.

Lionel has a quiet charm, too, particularly obvious when Norton shares the screen with Gugu Mbatha-Raw. The pair have an obvious chemistry together, and the scenes they share are amongst the best of the movie. Each elicits an engaging performance from the other, with neither feeling quite like the noir archetypes that prevail in pop culture, even as the film itself treads familiar ground. In that regard, Mbatha-Raw arguably had the more difficult to task, carving out a space in the narrative for a character with depth beyond simple clichés like love interest or femme fatale. She acquits herself with aplomb – Mbatha-Raw’s Laura Rose is, by the end, one of the most memorable characters of the film.

But it’s not just Mbatha-Raw who impresses. It’s worth remarking on the depth of acting talent that surrounds Norton in this film – indeed, what’s notable about Motherless Brooklyn is its sheer star-power, even relatively minor roles in the ensemble filled by character actors who could credibly carry the film. At this point, it’s easy to be drawn into a simple list – Cherry Jones! Michael K Williams! Willem Dafoe! Bobby Cannavale! – and a lot of the fun of Motherless Brooklyn (because it is, at times, actually quite fun) comes from this cast. Perhaps most compelling though is Alec Baldwin’s villain, Moses Randolph – a canny bit of meta-casting, not unlike Baldwin’s earlier role in BlackKklansman. The Trumpian connotations are taken further here (albeit essentially by accident; Randolph is based on a real-figure, and the script was written prior to Trump’s debut on the political stage) to great effect. Baldwin’s performance is key to Motherless Brooklyn’s quiet interrogation of influential, venal me, and how power quickly begets casual, spiteful cruelty. 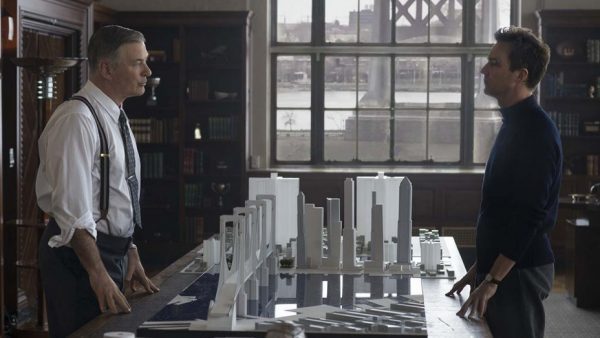 The second is Edward Norton the director – not, as you might have assumed, his first outing. Motherless Brooklyn isn’t Norton’s directorial debut; that was Keeping the Faith in 2000. (Or, if you’re so inclined, American History X in 1998.) Still, Norton has been working on Motherless Brooklyn since around the same time: he first acquired the rights to Jonathan Lethem’s original novel in the late nineties, production of the film essentially taking place on and off ever since then.

It is obvious enough that the film was a labour of love – the passion is palpable, writ large across every frame. 1950s Brooklyn has been affectionately recreated, new life breathed into familiar Americana; it is a world not of staid nostalgia, but instead something with a vital pulse. In that sense, it validates Norton’s decision to transpose Lethem’s novel from its original 1990s setting to the 1950s. Somewhat counterintuitively, this actually makes it feel more current – the benefit, perhaps, of a straightforward approach in contrast to the novel’s clever genre deconstruction. Even if nothing else, though, the opportunity to dwell on Beth Mickle’s production design, Amy Roth’s costumes and Michael Ahearn’s art direction would make it all worth it anyway. (Norton’s presence is – obviously – so keenly felt, it’s easy to fall into the trap of positing Motherless Brooklyn as one singular endeavour; it’s worth singling out the work of all the other talented creatives involved with the film not just because of how deserving they are, but also to counter that slightly suffocating narrative of auteurs. No film is an island, after all.)

That love translates into confidence: Motherless Brooklyn moves with a certain self-assurance, a sense of conviction no doubt borne of its lengthy gestation. Largely, it’s quite unshowy, willing simply to execute its premise with measured poise. That isn’t to say the film is entirely without flourish; a beguiling jazz sequence, where a feverish sensibility dovetails into taciturn reflection, is particularly memorable. (In fact, said scene is arguably key to Lionel’s character, a brief reprieve from his Tourette’s as he finally finds harmony in a dissonant world.) Of course, speaking about music in Motherless Brooklyn, it’d be remiss not to highlight Thom Yorke’s song, written specially for the film, Daily Battles. It’s a great piece of music, x and y, helping to further buoy Norton’s direction by making Motherless Brooklyn one of the straightforwardly best sounding films of the year.

All of which having been said, probably the most impressive directorial achievement in Motherless Brooklyn is its pacing. It unfolds, rather than drags. Despite criticism from some quarters, it isn’t weighed down by its length – unambiguously a good thing, given the film is nearly two and a half hours long! 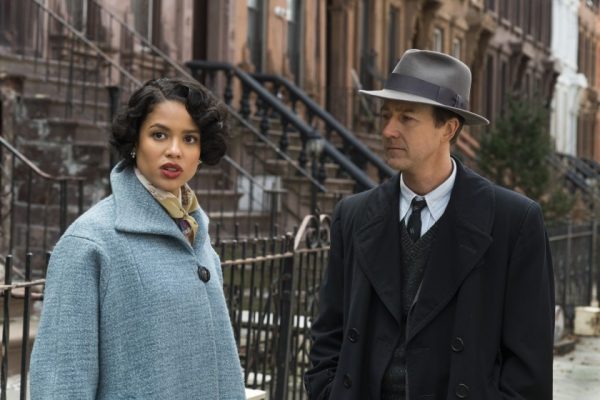 Finally, then, there is Edward Norton the writer.

It seems likely that this, if anything, will earn Norton his third Oscar-nomination – Motherless Brooklyn (alongside The Two Popes) presumably being amongst the leading contenders for the Best Adapted Screenplay award. Much like his performance, it’s a precise script, particularly as its central mystery unravels – but, again, to focus on that precision would be to obscure how gentle it can be. Motherless Brooklyn is often quite touching, its puzzle box structure belying a certain intimacy to a film that is concerned, above all else, with the ties that bind Brooklyn together. Indeed, Motherless Brooklyn is most interested in the personal – consider how its interrogation of corruption and gentrification manifests as Moses Randolph’s bitter malice, a blunt articulation of the entitlement of the elite.

As a neo-noir, it lands somewhere between homage (the film could very easily have played in monochrome) and reinvigoration. It doesn’t quite take the same approach as the season’s other big mystery film, Knives Out, which cannily restructured the whodunnit to remind everyone of the genre’s strengths. Though both have the sense that they’re blowing the dust away from familiar, long-loved staples, Motherless Brooklyn offers instead a direct and unreconstructed take on its detective story. If it reminds people why they love the genre, it does so simply by aspiring to an example of such that is as effortlessly impressive as possible. In that sense, it is a script written with as much poise as it was directed. (Nonetheless, Norton must be frustrated that Motherless Brooklyn’s release overlapped with Knives Out – each obviously offering different strengths and holding different appeals, but one mystery ensemble with a stacked cast might perhaps have cannibalised the audience of the other.)

Ultimately, what is perhaps most significant about Motherless Brooklyn is how steadfast it is in resisting cynicism. Certainly, it has the healthy scepticism that defines the genre, and at times it can be quite dour. Yet it never allows itself to be cynical, ending instead on a final note of solace. Focused on a city full of people increasingly orphaned from one another, full of broken-down and failing relationships, the film’s closing words suggest that isolation need not be total, need not be complete: Brooklyn doesn’t have to be Motherless, in more ways than one.

Motherless Brooklyn is in cinemas from December 6th 2019.