To compliment the release of the “final” entry into the Skywalker Saga, Shaun Munro revisits the most infamous piece of Star Wars media in existence, 1978’s legendarily woeful Star Wars Holiday Special… 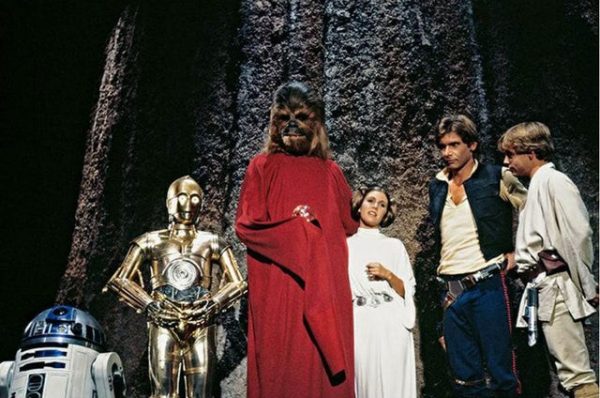 While Star Wars fans routinely squabble over whether The Phantom Menace or The Last Jedi is the movie which sent the franchise irreversibly hurtling off the rails – it’s actually Attack of the Clones, by the way – most all can agree that the worst piece of visual media committed to the space opera’s canon – and eventually removed – is The Star Wars Holiday Special.

The two-hour variety-style show, originally broadcast on CBS on November 17, 1978, was mounted by prolific TV producer Steve Binder, who earlier in the year had won an Emmy for helming The Barry Manilow Special. Yet as George Lucas was busy moving his production company to a new location and Lucasfilm as a whole was preoccupied with prepping The Empire Strikes Back, Binder – who replaced previous director David Acomba – received little feedback from the company, and the production as a whole was largely left to its own unqualified devices.

As such it’s little surprise that the end result feels truer to the campy theatricality of variety shows than it does Star Wars, an immediately unwieldy mix which isn’t in any way justified in this fascinatingly terrible hodge-podge of sentimental home-for-the-holidays junk, sporadic musical performances and celebrity cameos, and faint spicings of genre world-building. It’s a disaster of proportions epic enough that even Lucasfilm, never one to shy away from a penny to be made, hasn’t ever released it on home video.

But of course, it endures as a gloriously grotty bootleg relic on YouTube, wrapped in layers of degraded VHS clingfilm, and apparently enough of a non-entity to Disney that they can’t even be bothered to copyright claim it. 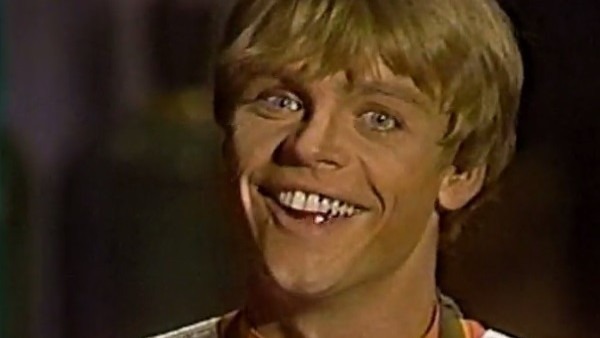 Set between the events of A New Hope and The Empire Strikes Back, The Star Wars Holiday Special follows Chewbacca (Peter Mayhew) and Han Solo (Harrison Ford) as they attempt to visit Chewie’s home planet of Kashyyyk to celebrate the ambiguously festive holiday “Life Day.” But this is really just a flimsy hook that allows the special to shift its focus from the franchise A-listers and cling instead to Chewie’s family; his father Itchy (Paul Gale), his wife Malla (Mickey Morton), and his pint-sized son Lumpy (Patty Maloney).

Despite how bizarrely second-rate a prompt this is for a Christmas-themed Star Wars special – or really any Christmas spin-off at all – it was reportedly George Lucas’ single major mandate that the show focus on Chewbacca’s family. And while it’s entirely possible a different angle might’ve bore genuinely affecting fruit – specifically a more simplified sci-fi road trip movie focusing on Chewie and Han – it’s apparent from mere minutes in that hovering over Chewie’s family in particular was a deeply terrible idea.

For starters, these segments following Itchy, Malla, and Lumpy unfold near-wordlessly for the most part; an opening segment where Chewie’s parents lament their son’s absence goes on for almost ten agonising minutes, where the only thing more lacking than words is actual audience interest. It’s tough to imagine a worse way to kick this thing off.

But what follows? A string of faintly-linked variety-style segments, the first being a bizarre dance sequence set to a range of psychedelic music which would sound more at home in a Gaspar Noé movie than Star Wars. Much of the special is held faintly aloft – a term I’m using very loosely – by the revolving door cameos of famous faces; most of them seem at least somewhat enthusiastic to be there, yet blissfully unaware of quite how misguided the show’s tack truly is.

Art Carney appears extensively as Trader Dann, a fast-talking wheeler-dealer pal of Chewie’s family who spends most of his time spitting out scarcely coherent ramblings. He is, nevertheless, about as naturalistic as any actor in the show ever gets, and if nothing else he gave us all the immortally toe-curling one-liner, “I love to make a Wookiee happy.” 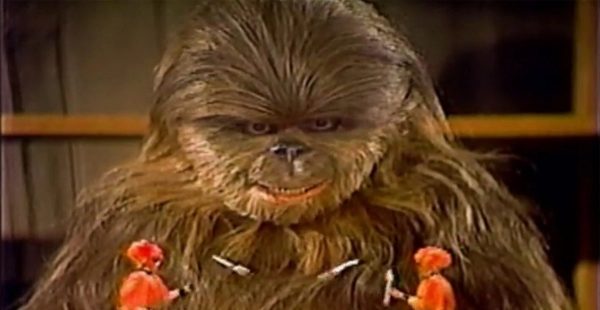 As for Malla, she spends a good chunk of the special cooking up a “Bantha surprise” with the help of a deliciously camp four-armed alien TV cook, Chef Gormaanda (Harvey Korman), and elsewhere Jefferson Starship drops by for a holographic musical performance which mesmerises an Imperial officer.

But if there’s one segment which actually survives the film’s wilful tastelessness, it’s the genuinely charming 10-minute animated sequence centered around Boba Fett, who of course hadn’t been introduced in the movies yet.

With a neat, expressionistic visual style and a solidly engaged vocal performance from Mark Hamill – the less said about a somnambulant Harrison Ford the better – it’s the single categorically not-embarrassing divergence in the entire show, written by Lucas and produced by Toronto animation outfit Nelvana Ltd (which continues to operate successfully to this very day). The rubber-faced, Spitting Image-esque countenance of Ford’s Han Solo, though, is rather distracting in its intense repulsiveness. 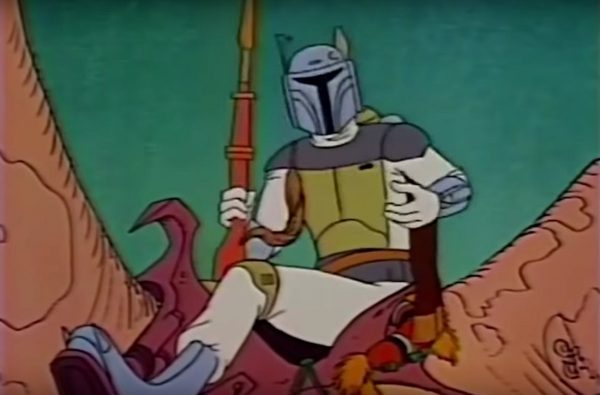 If there’s any scarce live-action “highlight,” it’s surely the “Life on Tatooine” segment, which returns us to A New Hope‘s much-loved Mos Eisley Cantina, and cannily casts Bea Arthur as a sassy, no-nonsense bar manager. It’s still painfully daft – especially when Arthur rebuffs a loved-up bar patron by pouring him a new drink…directly into his head – but she carries it like a champ. Like most everything else in this special not featuring Boba Fett, though, it drags on far too long, running for a solid 15 minutes before concluding with, yes, another turgid song.

On top of all this, A New Hope‘s marquee players were roped in for a few scattered scenes a-piece. Mark Hamill, sporting a distracting blonde wig and layers of unflattering makeup – the latter apparently due to a scar he received from a prior car accident – is at least an enthusiastic enough presence despite having little to actually do. Beyond trying to creepily coax a smile out of Malla, anyway.

Han and Chewie meanwhile appear briefly in live-action form through sporadic interstitial segments as they’re flying to Kashyyyk, and re-emerge for a slightly more substantial showing in the final segment. Harrison Ford clearly couldn’t be convinced to care, though, and he’s perhaps the only person here who demonstrably knows what’s up.

Leia and C-3PO are similarly in this thing for mere minutes, culminating in her singing a song for the assembled cast to commemorate Life Day. Much has been made of Carrie Fisher’s idiosyncratic performance in the special, most noting her well-documented drug use during the period, so make of that what you will. James Earl Jones also re-appears briefly via voiceover, which is re-dubbed over footage from A New Hope with an hilarious shamelessness.

This speaks to the production’s surprising technical roughness, or perhaps laziness, even accepting the fact we’re watching it by way of a smeared-up bootleg. The whole shebang boasts scarcely more sheen than a period episode of Red Dwarf, yet without the sci-fi sitcom’s self-aware embracement of its own tawdriness. Shot selections are corny throughout, especially the hilarious reaction inserts from the Wookiee family, to say nothing of the routinely jarring editing transitions. 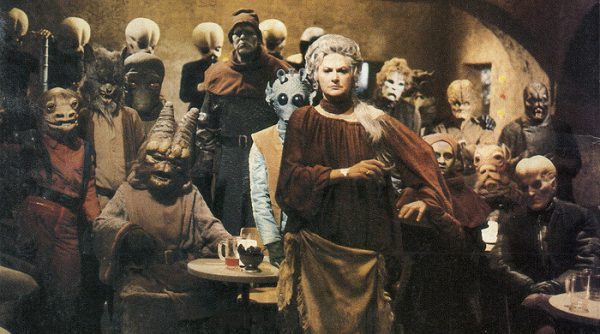 And yet, watching The Star Wars Holiday Special with that ’70s VHS dustiness does lend a tough-to-deny kitschy charm, and one suspects that a pristine remaster for Disney+ – unlikely though it is – would strip away much of that giddily perverse enjoyment factor. It’s all the better if you can find a version with the period commercials retained.

More than anything, this mind-boggling cultural artefact speaks to just how much people loved the phenomenon that was A New Hope, that anyone had enough hubris to believe they could get away with producing something so fundamentally off-base. It’s clear that those in charge creatively didn’t get why fans connected with Star Wars so much, and as hands-off as Lucasfilm insists they were, they do shoulder some of the blame for failing to create anything close to a broad schematic for the variety folk, ill-suited though they were, to follow.

There are laughs to be had, for sure, though the unfortunate reality is that as much as this show is infamous for being uniquely terrible, it’s often more boring than amusing – and the oddly elongated runtime doesn’t help. The musical segments provide some solace from the goofy “story” even if they also outstay their welcome, and again, the animated sequence is the only genuinely good part.

The Star Wars Holiday Special is a work of such baffling insanity that every Star Wars fan deserves to watch it once – but probably only once.