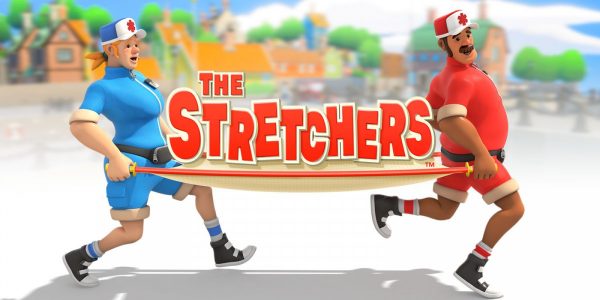 Shadow-dropped by Nintendo on the eShop a few weeks ago, The Stretchers is the latest offering from Little Nightmares developer Tarsier Studios, and couldn’t feel much more different from their prior horror-platformer.

This relaxing, endearingly daft physics-based co-op puzzle game thrusts players into the role of two paramedics, who must team up to help rescue the city’s “Dizzies” – that is, citizens who have been rendered semi-conscious by the evil Captain Brains.

This transpires into a simple yet devilishly fun core gameplay loop, where either solo or co-op, you’ll control both medics as they traverse a series of comically elaborate locales – such as saw mills, banks, and beaches – loading up the Dizzies on stretchers, transporting them to the ambulance, and then driving the ambulance back to the hospital.

To be clear, The Stretchers is in no way a game that takes itself seriously, and the difficulty level is appealingly low to match. Even though each mission comes with a fairly generous countdown timer, failing to meet said time will simply result in you forfeiting a bonus rather than having to start all over again. This near-total lack of challenge perhaps makes the game best approached as a palate cleanser between more substantial AAA offerings.

Not a single mission in the game should stump players for more than a few minutes because the puzzle elements are so straight-forward, and the real “challenge” lies in getting to grips with the game’s intentionally unwieldy controls and physics. Getting a patient to the ambulance is rarely as simple as dumping them on the stretcher due to the sheer number of obstacles the game will throw at you, be it projectiles, laser beams, or even angry pigs. 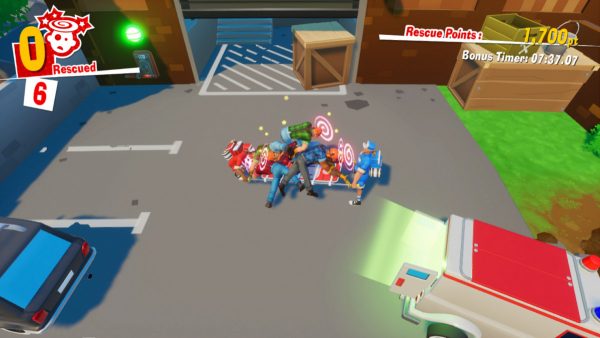 This will inevitably result in either yourself or the Dizzies being knocked out or launched across the room, as hilariously realised by the game’s ridiculous ragdoll physics. And it’s this wilful sloppiness, reminiscent of Octodad: Dadliest Catch, which lends The Stretchers much of its charm.

It’s undeniably odd, though, that players aren’t actually required to use the stretcher for the most part, especially as having to nimbly manoeuver the stretcher with a fellow player represents the game’s most inspired challenge. In fact, in most cases it’s simply easier to pick up patients with your bare hands and drag them to the ambulance, while the stretcher is merely an optional encumbrance.

Using the stretcher is further de-incentivised by the sometimes frustrating controls, which require players to find the precise sweet spot where the medics can actually grip something. When you can waste extra seconds fumbling around to grip the stretcher – in a game that rewards players for speed, no less – it’s usually more efficient to just go without. However, players are also rewarded with extra points for using the environment in creative ways to get the Dizzies back to the ambulance, such as throwing them on trampolines or chucking them down dump tubes.

Once you’ve mastered traversal and transportation, you need to hop into the ambulance and drive to the hospital. These brief sections evoke an undeniable Crazy Taxi vibe with their seemingly intentionally still controls and physics. Strangely, though, you can crash and roll the ambulance without harming your passengers; giving the Dizzies a health meter while being transported would’ve been an easy way to inject some additional strategy and light difficulty into the scenarios.

The majority of my experience was played solo (unfortunately), but I was extremely impressed at how enjoyable the game is to play both as a single-player and multiplayer romp. Many co-op-focused games tend to lose a lot of the core charm when played alone, and yet, having to split your brain in half in order to co-ordinate the two medics is a whole lotta fun, especially as the game allows the medics to stray pretty far from one another. Co-op, of course, is the recommended way to play, if only because it’s sure to test your ability to, well, co-operate with your friend/family member/significant other. 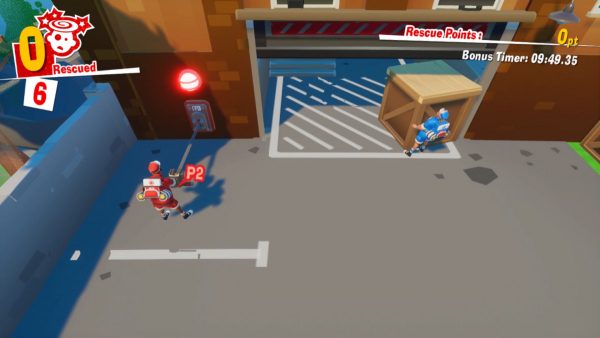 Aesthetically, The Stretchers doesn’t offer much to write home about; the environments are appealingly bright, though the texture quality is rather on the low side, even for a Switch indie. This is especially evident when driving around the city, with many incidental objects appearing blocky or fuzzy.

It’s also painfully obvious how many assets have been recycled throughout the story mode; several missions even see you straight-up returning to the same locale, which is a shame. A greater sense of visual diversity would’ve helped, even if it’s fair to say that the game is sold largely on its gameplay hook rather than the visual fidelity. Audio, similarly, is pretty unremarkable, though the musical score occasionally serves up some peppy jazz licks.

The core campaign lasts around four hours and wraps up long before the straight-forward gameplay can begin to outstay its welcome. I was entertained for almost all of my time spent playing it, even if I wasn’t hugely compelled to keep pressing on with the sillier, mini-game-style side missions, or to bother replaying missions to improve my time or score.

Though not nearly exploiting its full potential, The Stretchers is goofy, no-frills fun whether you’re flying solo or teaming up with a friend. 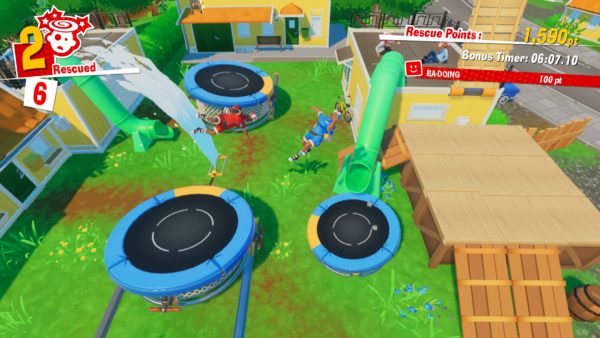