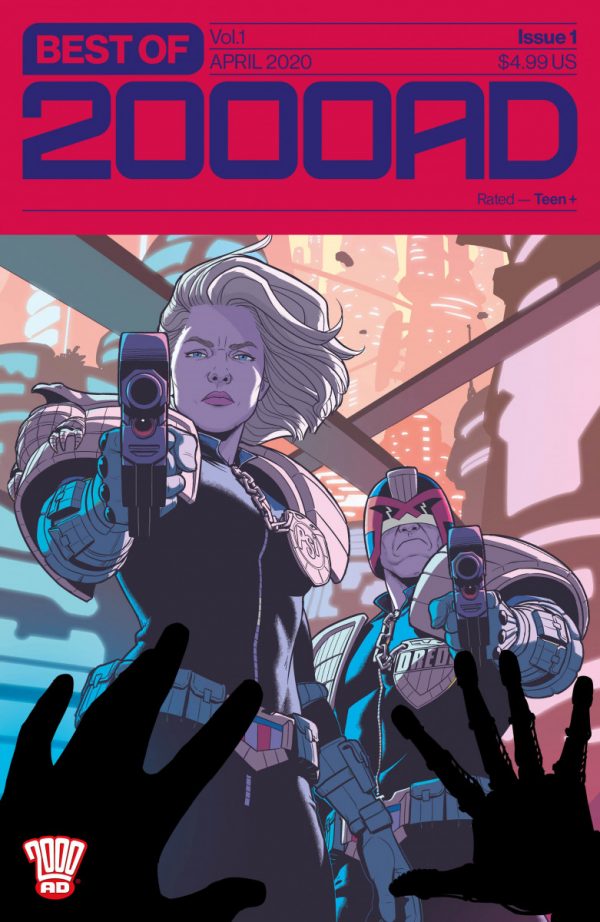 It’s been said about the Big 2, DC and Marvel, and it’s been said about Britain’s 2000 AD. All three publishers have been telling stories for decades. Find a character amongst their titles that you like and numerous possibilities for further reading emerge. Too many options can be as much a deterrent as too few, however, and the lack of a definitive starting point can make knowing when to jump in impossible.

Which is where Best of 2000 AD comes in. Marketed towards new readers, this 12-issue series is designed to be accessible to anyone. Although it’s being released as a monthly (and, while typical in comics, that’s unusual for 2000 AD), each issue is self-contained. Technically issue #2 could pick-up where one of the secondary stories left off, but that seems unlikely, given there are so many other series to sample [UPDATE: Issue #2 will be continuing Halo Jones].

The numbering for these issues is pretty arbitrary then, while it sounds like all twelve will be divvied up the same way – a self-contained Judge Dredd story (in issue #1 that takes up about half the 100-page count), followed by a sampling of other stories. While this review will name all four, there’s not really a way of telling what’s inside, keeping the contents of each issue a surprise. As much as Jamie McKelvie’s cover art is amazing, it does get your hopes up for a Psi-Judge Anderson comic.

Instead the issue opens with “Terror,” a story by Judge Dredd co-creator, John Wagner, about a bomb that goes off, killing multiple judges. Judge Dredd may be the title character, but Wagner focuses more on the prime suspect, Sonny Castinello, making it not an obvious choice for a first Judge Dredd story. That’s what’s neat about it, though. The judges have a lot to answer for and this story doesn’t go easy on them. Anyone who might’ve assumed Judge Dredd was a hero is going to find out the truth real fast.

Colin MacNeil is the artist on “Terror” and if you think the colors look good digitally, that’s nothing to how they pop in print. On more than one occasion he uses Judge Dredd’s helmet to associate him with fire, a destructive force, by which one panel melds into the next.

Some of the ideas in “Terror” will be familiar. Letterer, Tom Frame’s, dialogue boxes draw attention to unethical interrogation methods, like the endless line of questioning one of the characters endures. Invasion of privacy comes up as well, but what Wagner and MacNeil do is use the sci-fi genre and the comics medium to show these ideas taken to their extremes. Using futuristic technology of their own invention, this isn’t a tale for the squeamish.

“Strigoi” follows Atalia Jaegir, a war crimes investigator, spinning off of the popular 2000 AD strip, Rogue Trooper. Thanks to writer, Gordon Rennie’s, first person narration, Jaegir is a character you get to know more personally, in a story that deals with biological warfare. Lettered by Simon Bowland, with art by Simon Coleby and colors by Len O’Grady, their depiction of the future is more grim than the art team’s on “Terror,” with lots of shadows and barren landscapes, but that grimness is balanced out by characters who speak more informally.

The Ballad of Halo Jones is a classic series by writer, Alan Moore, and artist, Ian Gibson. Set in space, with letters by Steve Porter and newly colored by Barbara Nosenzo, Best of 2000 AD #1 includes the first three installments, in which everyday activities, like shopping, have become dangerous ventures for Halo Jones and her friends.

In Brink, Brink and Bridge are working a murder case. Another future set in outer space, while the violence in this story can be as bad as “Terror,” artist, I. N. J. Culbard’s, more cartoony style doesn’t feel as rough. Written by Dan Abnett, with letters by Simon Bowland, info text bubbles are used to relay information, so the characters don’t have to. Finally, a one-page story by Henry Flint and lettered by Annie Parkhouse closes the issue up.

All of the stories present themselves. While you might expect there to be some introductory matter, or background information on who these characters are, Best of 2000 AD throws you in the deep end. Yes, these are entry level stories, but they’re not stories you can read distracted. You have to be willing to not know what’s going on right away but acclimating to these worlds is a lot of fun, and if there’s only one thing I would change it’s that the issue doesn’t include recommendations for further reading