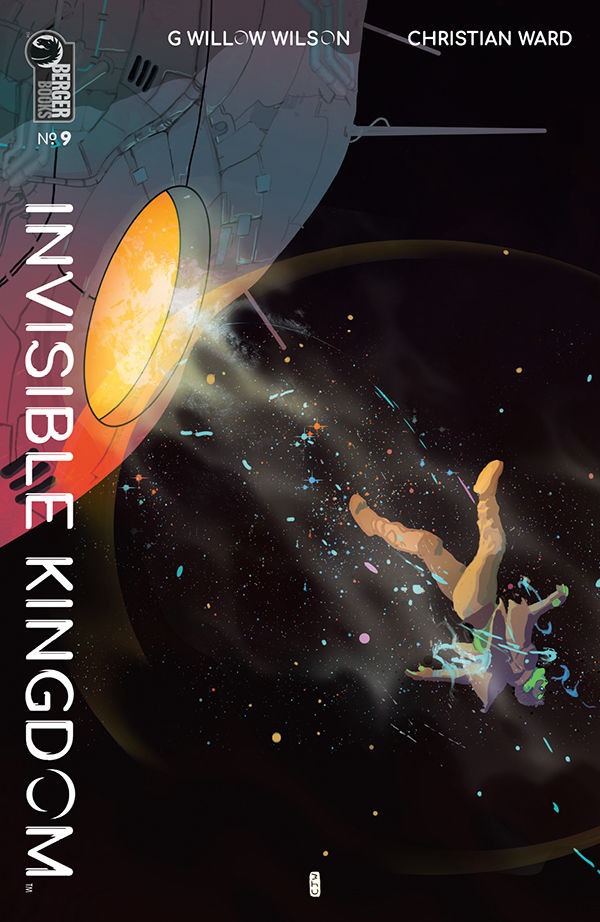 Issue #9 of Invisible Kingdom brings us back to the crew of the Sundog trying to find scrap to repair their scuttled ship. There is little time to spare and possible threat all around for Grix and her threadbare crew. Meanwhile Eline and Vess try to sweet talk the dangerous Turo to get them back onto the Sundog while keeping attention away from the theft going on under Turo’s nose. Things come a head as the hotheaded Grix scuppers the plan and leaves the crew in a precarious situation.

Following a more fantastical telling of sci-fi in the vein of Saga or Skydoll, Invisible Kingdom continues to build on the keen writing of G. Willow Wilson and the motley crew of characters. The issue delves deeper into the anatomy of the mysterious Roolians and the brash but loving nature of captain Grix.

The artwork from Christian Ward is captivating as always, with interesting line work capturing great expressions and a fantastic use of colour throughout. Backgrounds are fairly sparse but the comic didn’t allow for much room to breath. The shots of the ships and space itself look vast in Ward’s art style.

Overall this is a neat addition to this relatively new series of science fiction comic. Much like earlier issues the pacing is a bit abrupt – functional, but not entirely obvious what is going on where. The series provides a delve into a dark and mysterious world of space and magic and the connection between the two female characters that drive the story. Their completely different lifestyles leading up the tension and drama in a series with much to give yet, and hopefully the writer has much to deliver in this fantastic series.