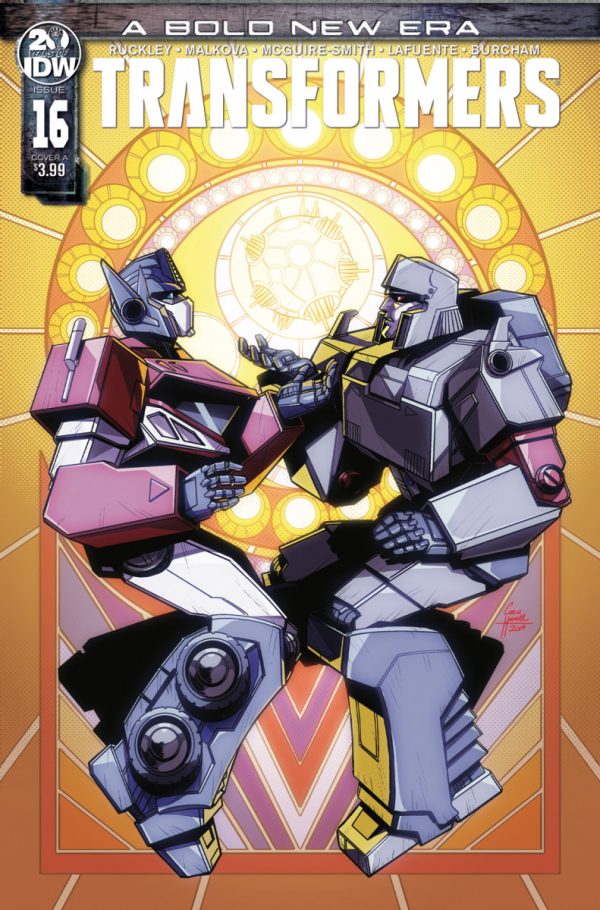 Throughout IDW’s new Transformers series, we’ve gotten a look at pre-war Cybertron and the tenuous balance between the different sects of the planet’s leadership. Transformers #16 may be the penultimate issue before all hell breaks lose as Megatron takes a drastic step before his full plans can be uncovered. It’s an intriguing issue in which writer Brian Ruckley focuses on the powder keg they’re all sitting on as the various characters make their moves to ensure Cybertron’s future.

While fairly balanced between the large group of characters that appear, the focus on this issue is mostly placed on Megatron once again as he attempts to remain inconspicuous to the problems facing Cybertron. Due to this, we finally get our first scene of the series between Megatron and his usual second-in-command Starscream. Ruckley writes both characters very well during their interaction. It already seems like Megatron can barely stand Starscream while Starscream is every bit as manipulative, cunning and treacherous as he usually is as he tells Megatron he’s backing multiple horses in Cybertron’s struggles before giving him some pretty vital information regarding Bumblebee. It’s a great moment that just highlights their relationship and quite possibly foreshadows why Megatron would make someone like Starscream his top lieutenant over a more loyal follower like Soundwave.

Ruckley has been planting a lot of seeds throughout his run, something that has at times been both a positive and negative aspect to the book. His long-form story makes the issue-by-issue release seem a little slow, but it also allows for a lot of potential with its payoffs down the line. Several elements of Ruckley’s story seem poised to get that payoff as the situation on Cybertron dovetails to an explosive event. Between a Voin warrior showing up to seemingly avenge the Voin who was murdered by the Rise to the use of the Titan fleet, mentioned all the way back in the first issues of the series, a lot of the plot is coming to a head and intersecting. With the momentum having greatly picked up with this story arc, the payoffs are serving quite nicely now.

The art featured here is among the best in the series so far. Beth McGuire-Smith and Anna Malkova’s styles compliment the other and are very animated. McGuire-Smith subtly shows Megatron’s disdain and impatience with Starscream through his body language while Malkova illustrates an action sequence very nicely with a lot of fluid movements between the characters and their transformations. The colours from Josh Burcham and Joana Lafuente accentuate the pencils. Burcham does a nice job playing with the shadows of the Senate hall while Lafuente mixes a lot of different colours through her multiple locations very well. The work from the artists gives the issue a very cool visual look.

Transformers #16 is another good issue from Ruckley as he begins bringing multiple parts of his overarching narrative together while spelling doom for Cybertron. There’s a tenseness by the end of the issue that emphasizes how close to collapse Cybertronian society really is right now. The art from McGuire-Smith, Malkova, Burcham and Lafuente provides some of the best imagery in the series so far. Hopefully the next few issues will see more of Orion Pax as he’s been put on the sidelines lately, but that seems inevitable with Megatron about to make his big play.