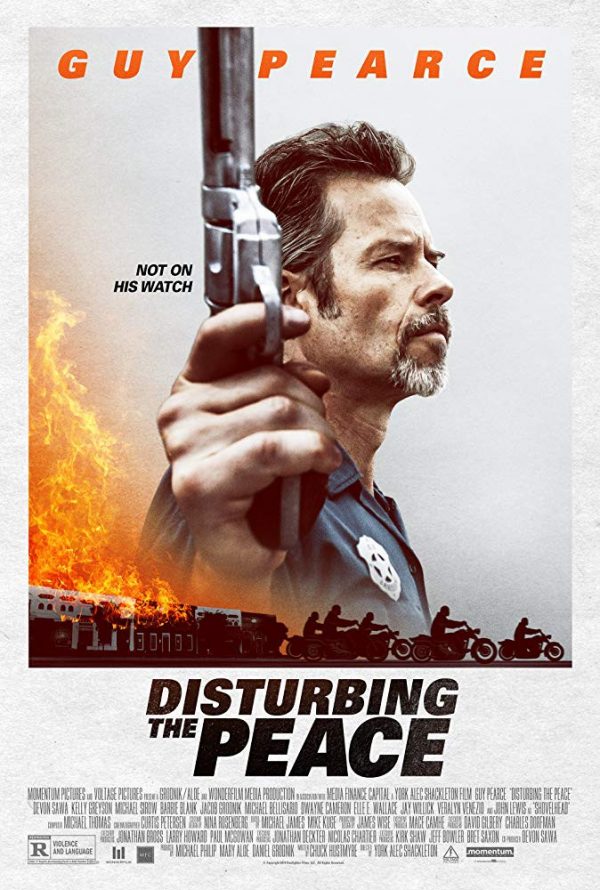 A small-town marshal who hasn’t carried a gun since he left the Texas Rangers after a tragic shooting, must pick up his gun again to do battle with a gang of outlaw bikers that have invaded the town to pull off a brazen and violent heist. 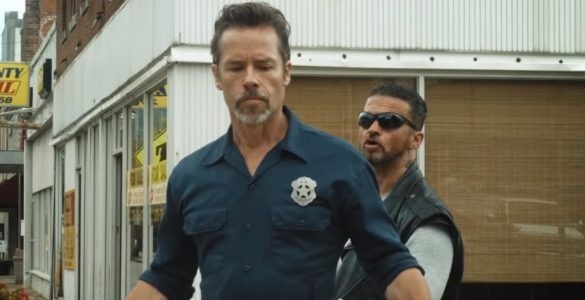 There’s plenty to mention regarding how incompetent director York Alec Shackleton’s Disturbing the Peace is (last year the filmmaker was responsible for 211 starring Nicolas Cage, so that’s just an idea of what you are getting into here), but when it comes down to it, amateurish skill can be forgiven if the movie itself is entertaining or gripping at even a basic level. This movie is not; even its action sequences just see the various characters lumbering around all over town like chess pieces waiting to make a move.

Disturbing the Peace begins with a flashback sequence detailing Guy Pearce’s US Marshall Jim Dillon failing to rescue his deputy partner from the clutches of a criminal. Jim is told to take the shot while the assailant preemptively counters the signaling, causing his partner to catch the bullet (it also needs to be said immediately that anytime someone is shot here, there is a staggeringly delayed response to the impact as if people don’t feel bullets or collapse until at least one second afterward). Anyway, Jim still kills the target, but not without his partner paralyzed and apparently suffering for 10 years inside of a hospital before passing away.

This sets forth the clichéd ‘man of law enforcement vows to never use a gun on duty’ character arc before, you guessed it, resorting to firearms during the last stand. And while that’s not necessarily problematic, Chuck Hustmyre’s script has a gritty and nihilistic touch that’s repellent without any real purpose. Civilians are terrified and held at gunpoint (strangely enough, the only piece of decent acting comes from a woman randomly taken hostage from her car and brought to tears with a handgun held to her head), plenty of innocent bystanders die whereas the Texas Rangers don’t even seem bothered by it, and execution is expressed as worthy justice. 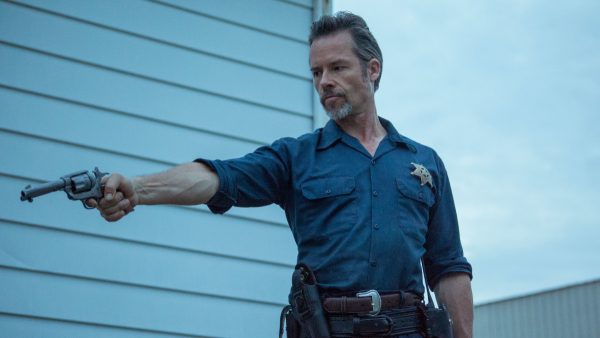 There are so many pointless supporting characters ranging from a slimebag running for mayor to an armored vehicle escort trying to land a date, that the movie doesn’t even care to analyze just why Jim can’t bring himself to use a gun. Even when he finally decides he must bring one into the situation, there are no exciting moments for the viewer to cheer it on or connect with the character in any meaningful way. It’s just another boring scene.

Meanwhile, Devon Sawa heads a biker gang as Diablo, who is just as interested in hurting others and destroying whatever town this is as he is in plotting to rob the security truck transporting thousands of dollars. I wish I could say he gives a hammy performance to make things interesting, but he’s playing things just as straight as Guy Pearce. On that note, what the hell did Guy Pearce do to decide to lower himself appearing in low rent generic action fare such as this?

Even as a brain-dead action flick, the shootouts are hampered with too much quick-cut editing and incoherency to strike one as tense. As mentioned, there are some serious problems with physical reactions to bullets, but making matters worse are bad sound design and a lack of impact behind hand-to-hand altercations. Ignoring the equally terrible blood spatter effects, there’s never any moment where Disturbing the Peace feels visceral or violent. The color palette gives the environments a washed-out bronze look that does no favors, and at one point two women characters get into a fistfight that for whatever reason look, nearly identical. 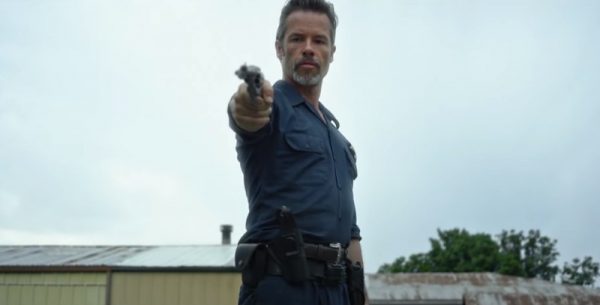 It’s just unequivocally tedious, so much so that it’s actually a good thing the ending credits run nearly 8 minutes long (realistically, they should run about four) just so the filmmakers could stretch this out into feature-length running time. I don’t say that just because there’s less movie to watch, but more so that the music over the credits (a reprieve from the same bland guitar strings playing over and over during the actual movie) might be the only tolerable thing about Disturbing the Peace.