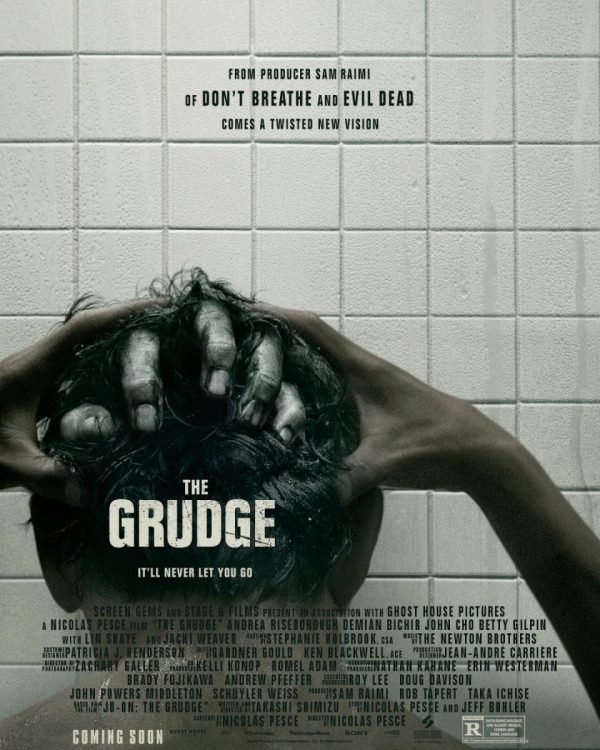 A house is cursed by a vengeful ghost that dooms those who enter it with a violent death. Horror reboots engender sceptical expectations at the very best of times, though this admittedly unnecessary re-tooling of the long-dormant The Grudge franchise was at least being brought to the screen by a unique genre voice.

Nicholas Pesce turned a lot of heads with his 2016 debut The Eyes of My Mother, a distinctively chilling effort noted for its creeping atmosphere and uniquely startling visuals. And with this reboot roping in a talented cast in the bargain, there was a sliver of hope that they might’ve been attracted to a bold, left-field reinvention of the series.

The sad truth, then, is that Pesce’s The Grudge is actually worse than 2004’s first U.S. remake, as was helmed by the filmmaker behind the Japanese originals, Takashi Shimizu. If the 2004 film at least benefited from its campier, sillier tone and general rollercoaster ride feel complete with amusingly OTT set-pieces, Pesce’s new take is, despite its skilled cast, a totally airless bore.

Though technically a “side-quel” to the 2004 movie, this new Grudge is more-or-less a re-telling of a similar story, albeit with the slightly new spicing of a True Detective-style murder-mystery yarn. Detective Muldoon (Andrea Riseborough) and her partner Detective Goodman (Demián Bichir) find themselves investigating a series of grisly happenings related to a single address, and it soon becomes clear that something untoward – that is, supernatural – is afoot in said house. Despite the basic logline being well-known to even casual horror fans, Pesce’s film spends an inordinate amount of its 94-minute runtime playing coy with the audience, once again adopting a non-linear storytelling approach which is ultimately more irritating than rewarding. The first two acts comprise a lot of bloated yapping about what has happened to the poor victims, before the third reel finally dispenses with any pretense of “classiness” and shows it all, by festooning ridiculous gore, both digital and unexpectedly practical, all over the screen.

But it’s tough to care much about what’s going on when the film is both so awkwardly fragmented and formulaic; Muldoon is of course a bereaved mother with a young son, and it’s not much of a spoiler to say that this family unit is inexorably threatened by the titular presence.

Except, Muldoon is kept off screen for several lengthy passages of the movie as Pesce darts around to other characters we scarcely know – including those played by the thoroughly under-utilised John Cho, Betty Gilpin, Jacki Weaver, William Sadler, Frankie Faison, and Lin Shaye – making the film feel lacking in a persuasive emotional core.

The sheer fact that seemingly decent people are being terrorised by a malevolent supernatural presence should really be enough to make us care, yet when the drama is so stock, the “scares” so metronomically predictable, and the visuals so headache-inducingly jaundiced, you’re more likely to clock-watch your way to the finish line. Speaking of which, those hoping for a satisfying ending should know now that there isn’t one waiting for them here. Without giving the game away, the final scene almost feels like an intentional attempt to enrage the audience, and it’s probably the worst possible thing Sony could’ve allowed Pesce to do if they were actually keen on a sequel (as, surely, they were).

The ending does speak to Pesce’s sensibilities as an indie filmmaker less concerned with the trite, tidy sentimentality of conventional Hollywood genre filmmaking, and while the film does very occasionally suggest how his meaner, sparser approach could’ve worked, it’s fundamentally hobbled by the utterly soulless writing and, most disappointingly of all, a near-total lack of mood.

In the very least, the ever-brilliant Andrea Riseborough slinks out of the picture with her dignity in tact, making an earnest attempt to lend a real sense of humanity to Muldoon, no matter that the elliptical narrative totally steamrolls her game effort. As a result, the new Grudge is neither as tawdrily enjoyable as the 2004 remake nor as viscerally effective as the Japanese original.

Not merely content to be an atmosphere-devoid horror reboot that few were pining for, The Grudge strands a wildly over-qualified cast in a misfire that’s also staggeringly dull.