Alone and trapped in a locked-down hospital, an injured young woman must escape a pair of vicious killers who are after the only piece of evidence that can implicate them in a grisly murder, the bullet in her leg. 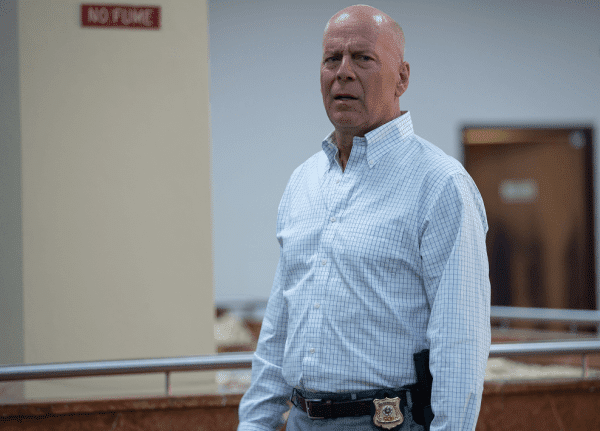 Die Hard is often regarded as one of the greatest action films ever made, its success inspiring a whole slew of action films featuring their heroes trapped in a single location and forced to fight for their lives. A setting that would be perfect for Die Hard clone would be a hospital, with the sprawling myriad of departments contained within allowing for all kinds of exciting opportunities. Enter today’s subject, the action thriller Trauma Center, a film that, makes a valiant attempt to adapt the Die Hard formula to a hospital setting, even to the point of borrowing its star, but instead squanders this potential and delivers what is ultimately a generic and ultimately forgettable experience.

The plot for Trauma Center is your by the numbers hotchpotch of familiar action movie tropes wrapped around a storyline we’ve seen before in countless action films and TV cop shows. We have corrupt cops involved in drug busts, a dead informant, a wounded witness, a veteran detective whose deductions skills move at the speed of a glacier, and even a severely ill sibling who might as well wear a shirt that with the word “HOSTAGE” emblazoned on it. Quite simply, it’s nothing special, but nothing terrible either.

The plot does take a few clumsy turns to ensure its heroine is isolated against her foes. Such as the police thinking it a good idea to hide a witness on an empty floor of a hospital with only a single armed guard, with this supposedly genius hiding place being discovered by our villains mere minutes after the fact. This would be a suspenseful development if the villains weren’t utterly useless, with them unable to outsmart and overpower a woman bleeding profusely from a bullet wound in her leg, often giving her the very means to defeat them, such as leaving a knife within her reach or somehow dropping a vital piece of incriminating evidence for her to grab.

In all fairness to the film, it isn’t terribly made. The direction is solid, the cinematography is serviceable and the editing, while choppy at times, is not so terrible that action scenes are unwatchable. The action scenes themselves are your usual myriad of shoot outs and fistfights which hit their marks, although they came far and few between, with parts of the film feeling somewhat padded out to push the film to feature-length. The film itself is acting as one long chase scene throughout the hospital, and while it is competently handled, it does grow a bit stale.

As our heroine Madison, Nicky Whelan gives the film’s strongest performance, with the actress being a likeable and relatable screen presence who is easy to root for. Although, the character’s resilience does sometimes stretch your suspension of disbelief almost to breaking point, being a wounded limping victim in one scene, while in the next she turns into bloody McGuyver, crafting makeshift booby traps out of her surrounding props to foil her foes.

Texas Battle (now that’s a name) and former UFC fighter Tito Ortiz who, while not likely to win any acting awards anytime soon, are at the very least entertaining as the film’s corrupt cop villains. Battle makes for a fun cliched action movie villain, with much of the strength from his performance coming from the fun he seems to be having with the role. Ortiz while the weaker actor of the pair, more than makes up for his acting shortcomings with his a fearsome frame that allows him to appear as a genuine physical threat, even if he is ultimately rather useless as an assassin. 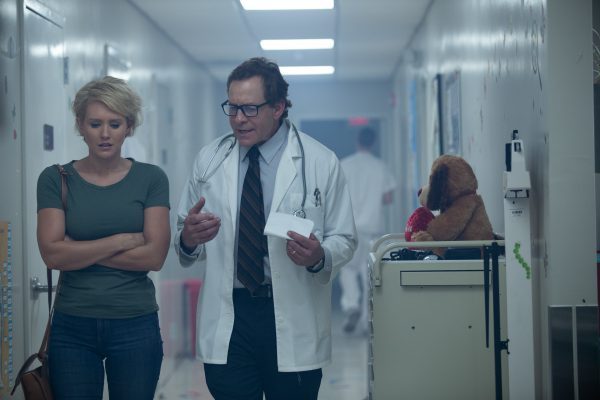 Perhaps the weirdest bit of casting is a short cameo from Police Academy’s Steve Guttenberg as a doctor. It’s a rather thankless role that gives him barely anything to work with, with the actor disappearing from the film entirely after about two scenes. Still, it’s nice to see he’s still making films I guess.

If there is one thing that really lets the film down it’s in the form of its biggest star; Bruce Willis. As per his usual run of films, Willis delivers a flat, awkward and often uninterested performance in which he either looks visibly bored or does the bare minimum of emoting to justify his presumably generous paycheck.

Trauma Center is not a wholly terrible film by any stretch, with it being competently shot, directed, and (Willis aside) decently acted. The biggest problem with Trauma Center is that it’s just not really all that interesting, exciting or, sadly, memorable. Check it out if you’re a die-hard Bruce Willis fan (see what I did there?), but otherwise, give Trauma Center a miss.