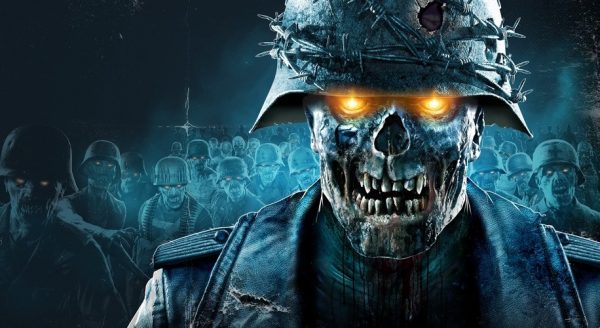 After a narrative heavy 2019, with hits like Death Stranding and Sekiro: Shadows Die Twice, cravings still exist for kill count bonanzas to induce personal exhilaration and bragging rights, which is why Zombie Army 4: Dead War has invaded just in time to grenade launch those January blues. Rebellion has received positivity from their Zombie Army trilogy – a spin-off of their 2005 tactical shooter, Sniper Elite – and has been applauded for its co-op capabilities during relentless horde waves. Dead War now breaks the trilogy boundaries and wastes no time in sending you to the front line.

Back to life, back to alternate reality, where a 1946 Europe lies in ruins post Hitler’s execution of the devastating ‘Plan Z’ that brought the dead soldiers of WWII back to life as the walking dead. Many heroes fought to eliminate the Führer and his zombie army and eventually succeeded in sending them back to hell. But as every good zombie flick goes, the dead don’t remain so for long. 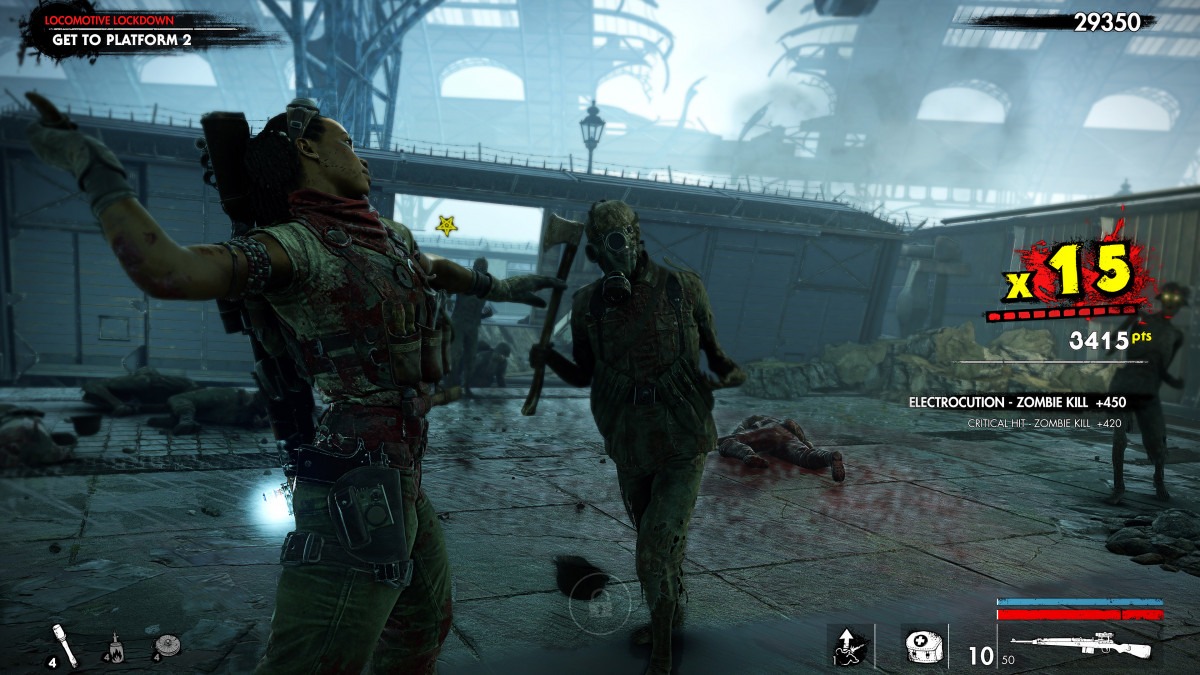 Zombie Army’s fourth instalment – Dead War – features all the perks of its predecessor but debuts a bloodthirsty new campaign for 1-4 players with drop-in, drop-out co-op. Horde mode has always been one of ZA’s best features and returns on point with an expanded map and new levels in apocalyptic, European locations like Milan and Venice.

Dead War’s customization is top tier with a slew of skills, special attacks and weapon upgrades (skins and charms work well as personable details), combined with a new electricity attachment to stun a batch of hordes with its Palpatine-style shock waves. All your favourite components from the original material are present and these new additions snowball into what’s gone before to build something greater. 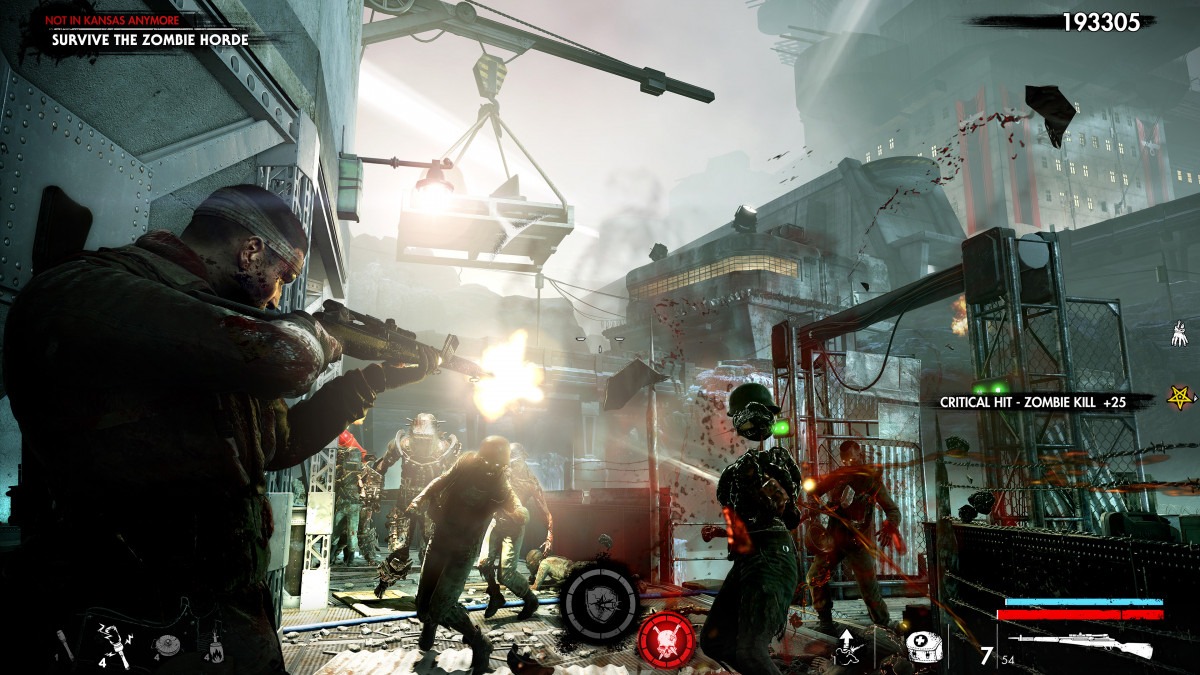 For any gamer that’s not shooter savvy, you’ll know the importance of keeping your cool when faced with numbers greater than the Battle at Helm’s Deep. ZA’s customization is designed to give you the smoothest, defending experience, however quick turning to strike a zombie that’s attacking you from behind takes some getting used to. Rifle control, aim assist, weapon switch, grenade usage and takedown melee attacks are all super easy to navigate between, having you an expert in no time. The bullet-kill cam adds pat on the back moments with Mortal Kombat gore reactions when it shows you (in slow-motion of course) which zombie organ your shot annihilated.

ZA removes the temptation to load up on med kits by dangling crates full of them in front of you but only allowing one to be carried. Each chapter in the single player campaign is relatively short, therefore you’re relying on your tactical shooting, stealth and quick reactions to keep you alive, injecting consequences of the real world into gameplay. Low health, however, can revoke your ability to interact with certain mission objectives, which is why a few dotted med kits scattered around each endeavor wouldn’t go amiss. 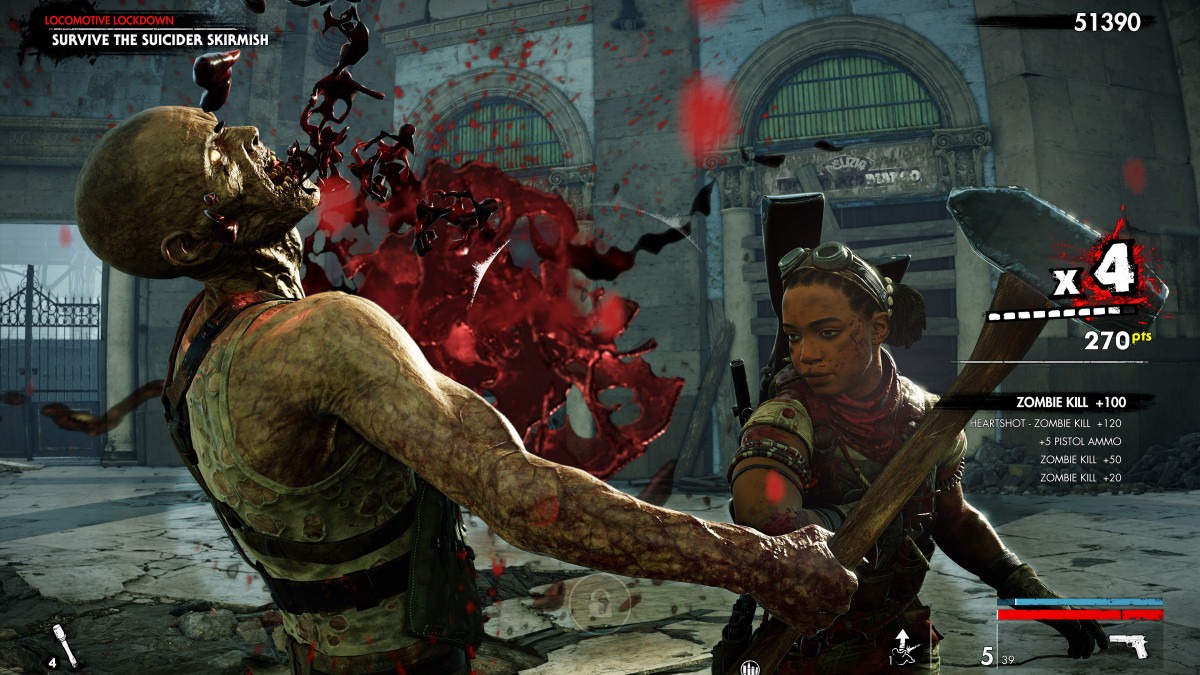 I absolutely love the B-movie aesthetic going on in amongst the grunge graphics. Campaign loading screens are presented in their own movie posters and the score sounds like something Robert Rodriguez had a hand in. There are Easter eggs to spot and each chapter has collectibles and stickers to locate whilst ticking off challenges, all triggering the motivation to revisit each path and collect them all. The subtle theme of the occult has an effective marriage with war, making the army of the dead look undeniably cool and executing them all to break the pentagram blood seals across barricaded doors is pretty sweet.

The brainless in question may appear in one, nerve-shattering sea of rotting bodies, and while they’re all limping shadows from a distance, each zombie is different and carries a new threat for you to face. Targeting suicide sprinters, flamers and machine gun wielding walkers first will increase your life expectancy immensely and a health boost from zombie takedowns or head stopping is a neat bonus. The enemies shouldn’t be underestimated though, as their attacks are hard blows which activate your pulsating, red vignette to indicate low health which is also an ultra-realistic touch. However, when death seems imminent, the second chance perk tosses you some extra life points if you make a kill whilst in critical condition; another detail that gives gameplay added character. 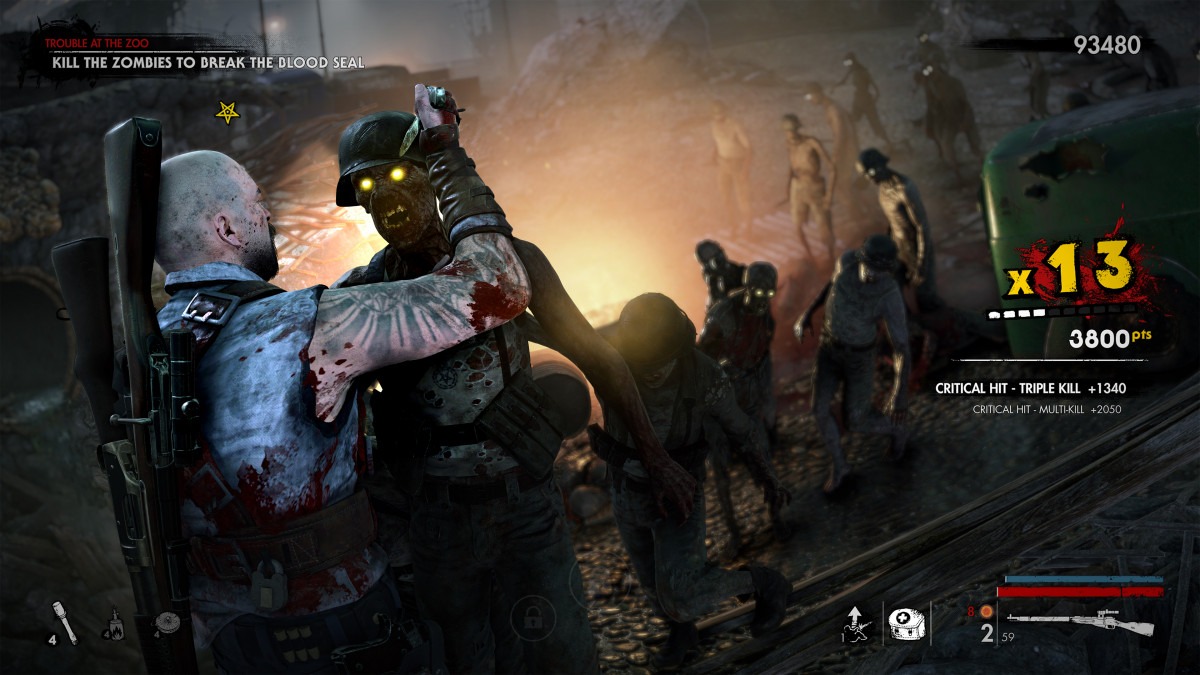 Whether you’re playing as Boris, the prisoner, Jun, the volunteer, Karl, the veteran (my guy), Shola, the engineer or Hector… the comical zombie, all praise should be shown to this series and it’s fourth chapter for executing an extremely fun and characteristically vibrant survival shooter to be enjoyed solo or in raging co-op mode. As comparisons always fall to Rebellion’s original Sniper Elite or the Left 4 Dead series, Zombie Army earns more medals for Dead War.