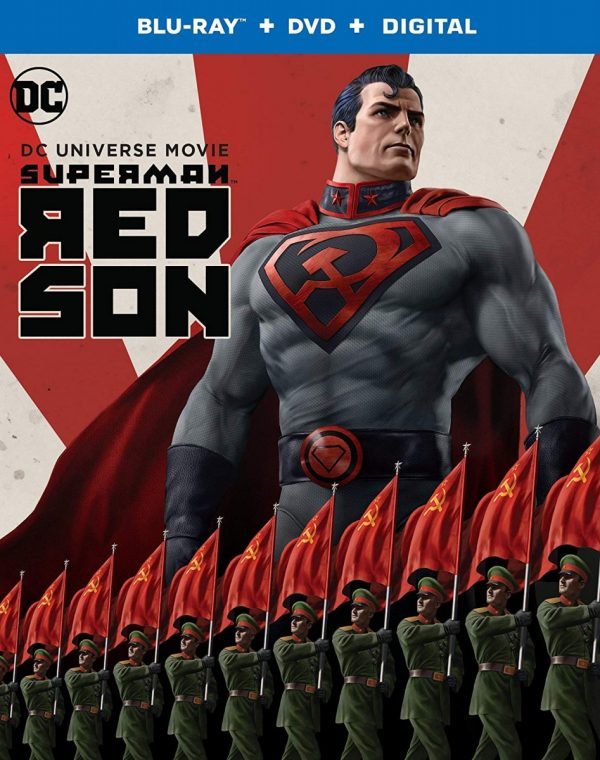 Based on DC’s famed Elseworlds tale from 2003, Superman: Red Son takes place in an alternate reality where the spaceship bearing the last survivor of Krypton crash lands – not in rural Kansas, but in Stalinist Russia. Can this Cold War-era Earth survive the coming of a Soviet Superman? 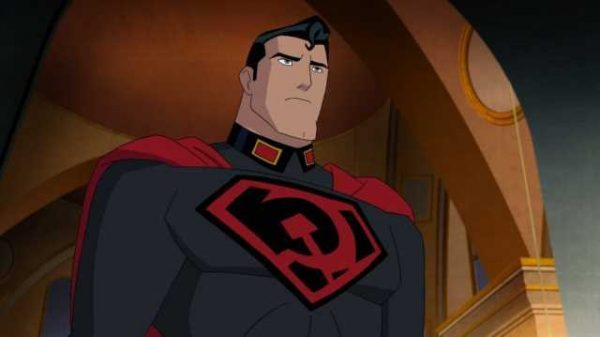 Superman: Red Son has been one of the most requested adaptations fans have asked for for several years. Originally written by Mark Millar with art by Dave Johnson, Red Son is an alternate look at Superman’s life where he landed not in America, but in the heart of Russia and became their chief weapon during the Cold War. Director Sam Liu makes an entertaining adaptation that retains the spirit of the source material even if it loses some of its nuance.

The Red Son cast do a pretty great job together throughout the film. Jason Isaacs is a nice alternate Superman, though his Russian accent sometimes sounds a littler too stereotypical, but he captures the essence of Soviet Superman. He balances the compassion, naivety and danger of this version well as he tries to bring peace to the world, but only through his rather narrow world view. Much like the graphic novel, the film doesn’t make him a straight up villain, but a somewhat misguided hero who gradually makes more and more allowances in his morals to adjust spreading his will and beliefs across the world. The rest of the cast do well in their roles. Amy Acker and Diedrich Bader share nice chemistry as a Lois Lane and Lex Luthor who are married to each other while Vanessa Marshall and Roger Craig Smith do well with Wonder Woman and Batman. Bader is a scene stealer as Lex, capturing Lex’s intelligence, charisma and often cold personality. The film makes him out to be a bit less morally grey as he spends decades battling Superman. He still makes morally questionable choices and treats several people who aren’t Lois as chess pieces to be moved at his will, but he’s less of an outright villain willing to do anything it takes to win than he was in the comic. Acker makes a great Lois and were this not an Elseworlds tale, she’d make a pretty good fit for the character in the regular continuity. Marshall’s Wonder Woman is nice, though is also perhaps the furthest departure character-wise from the book while Smith makes for an intimidating Russian Batman.

The film follows the Red Son story fairly well, taking liberties when necessary but most of the events and characters remain the same. With a nearly 90-minute run time, Liu’s direction moves the film along at a good pace as it is broken up into three distinct acts thanks to the jump in decades as the Cold War between the US and Superman’s Soviet Union rages on. Liu and writer J.M. DeMatteis have a good handle on what works and what doesn’t for the most part, making the story a little more streamlined in some areas such as Batman’s origin and hatred for Superman. 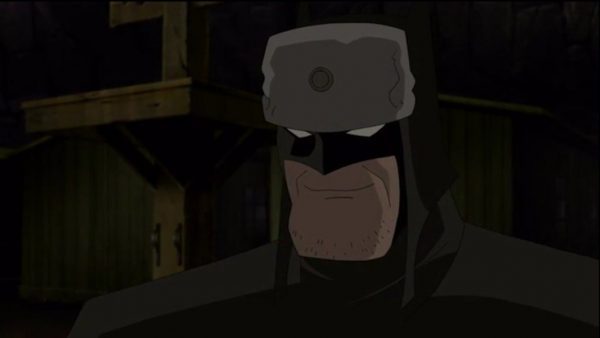 Where the adaptation falters is in some of those changes to the story that don’t work. Even though tension exists between Superman and Luthor, the two barely have any screentime together in the film as opposed to what their relationship was like in the graphic novel where they had a few meetings. There’s a lack of emotions to their rivalry, in particular with how Lex becomes more and more obsessed with defeating Superman to the detriment of his marriage with Lois, something that is touched on in the film but then completely glossed over after a big fight between the couple. Wonder Woman’s character also suffers as the motivations given to her in the film make her development far less interesting and nuanced as they become more about how men ruin the world rather than recognizing Superman’s increasingly tyrannical behaviour and her own role in his empire’s expansion. These changes and others, such as Bizarro’s ‘America First’ and ‘Fight me Ruski!’ attitude, make the characters less compelling and interesting in this new setting.

The film’s animation is pretty well done throughout. The style is more reminiscent of Bruce Timm’s style in the DCAU than the last several films in the Animated Original continuity. The animation is detailed and clear with the action scenes easy to follow and well choreographed. Superman taking on a squad of Green Lanterns is one of the film’s highlights as is Batman’s beatdown. The visuals look great and they do a nice job aging the characters throughout the decades, though more could have been done to show their age along with the changes in cities in the different time periods. The special features included are:

DC Showcase: Phantom Stranger (15 min) – A new DC Showcase animated short spotlighting the supernatural being known as the Phantom Stranger. Featuring the voices of Peter Serafinowicz, Natalie Lander and Michael Rosenbaum, the short follows a young woman named Marci in the 1970s as she gets taken into a cultish group with a charismatic leader who the Phantom Stranger needs to stop. It’s a fairly entertaining short as Phantom Stranger battles another centuries-old being, but it focuses more on Marci than Stranger, without really explaining who or what he is. Anyone who doesn’t know might be a little lost, but it’s still fun with classic DCAU-style animation. 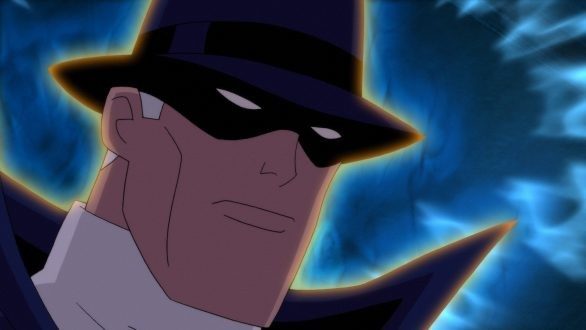 Superman: Cold Red War (17 min) – Looking at the various influences the Elseworlds graphic novel had and how it played with actual history. Sam Liu, Red Son artist Dave Johnson, DC creative director Mike Carlin and some Cold War historians discuss what led to the Cold War and what it was like living in that time period. It’s pretty interesting to hear how they utilized the fear of that era in the story and adapted it into the film, but the best aspect to this feature is learning actual Col War history, including its origins, and how the trends in comic books were affected in the 60s and 70s.

Superman: Red Son Motion Comics – Two episodes of the motion comic for Superman: Red Son. It’s a cool animation with a full voice cast and is interesting to compare to the actual film with the differences it makes from the source material. Sneak Peek at Justice League Dark: Apokolips War (10 min) – A look at the next release in the DC Universe Animated Original line which is a continuation – and likely the finale of – the current animated continuity films. Building off Reign of the Supermen, Superman and the rest of the Justice League take the fight to Darkseid with disastrous results. The film seems to focus on John Constantine, Raven and a few other heroes as they attempt to save Earth. It looks like a pretty interesting and out there film that features nearly every hero from this continuity all together, almost making it Avengers: Endgame level of epic in animated form.

Also included are previews for previously released DC animated films Batman: Gotham by Gaslight and The Death of Superman as well as episodes from the DCAU Justice League, the two-parter ‘A Better World’ with a version of the League that took over their world. 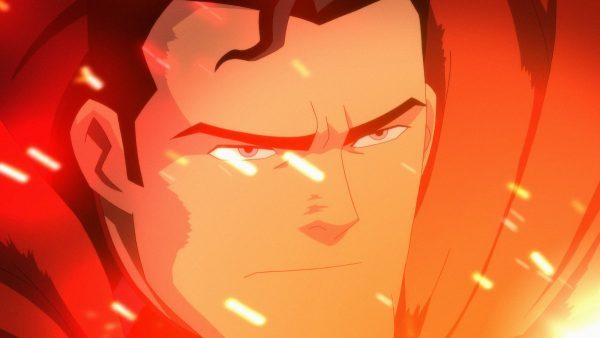 Overall Superman: Red Son is an entertaining adaptation of one of the most famous stories featuring the Man of Steel. The action is well animated and the cast do a lot of great work together. Some of the changes to the graphic novel were understandable, but others lessened the potential of the story and the characters emotional journeys. It’s still a fun watch, but fans of the graphic novel may be left wanting more.