Ricky Church reviews Transformers Vol 1: The World in Your Eyes… 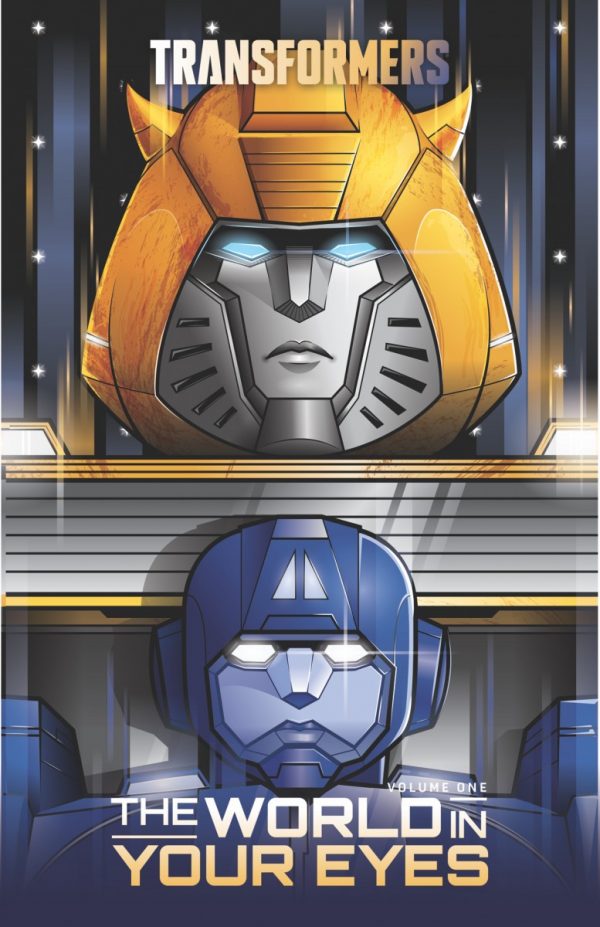 IDW’s relaunch of its Transformers series takes fans back to a pre-war Cybertron where Optimus Prime is still Orion Pax and Megatron is a popular but troublesome politician as writer Brian Ruckley weaves a complex tale leading up to Cybertron’s Great War. There are certainly several intriguing aspects to the new continuity and the first volume shows it reads much better as a collected book than individual issues. With nice artwork from a variety of artists, Transformers Vol 1: The World in Your Eyes serves as a good and interesting jumping on point for old and new fans alike.

The story begins at the height of Cybertronian society as ages have gone by without wars or even murder taking place, but there is still growing tension over limitations that have been placed on the populace in the wake of such violence. Bumblebee is training a newly forged transformer named Rubble, but everything changes when the pair discover Cybertron’s first murder victim in eons, launching a chain of events that will eventually engulf Cybertron in war once again in ways none of them can predict.

Ruckley has a pretty good grasp on the world of Transformers as he creates a new mythology in this continuity and utilizes several characters across the franchise, whether they’re from the original G1, the previous IDW continuity or brand new creations. Several of the changes he makes to pre-war Cybertron are intriguing, such as how instead of being a galaxy-wide empire in previous continuities Cybertron instead scaled back their reach and isolated themselves to a large degree following a previous drawn out and bloody war. It’s clear Ruckley is playing a long game as he casually drops mysterious bits of information and backstory that don’t come into play for several chapters, but he also falls into this trap a bit too much. Outside of a couple name drops, the continuous references of events or characters that are not fully explained lack the impact he’s looking for as he plays too much in the mystery box and leaves things wide open. The War of the Threefold Spark, the event that caused Cybertron to change their policies so much, is still left ambiguous as to why that war was such a catalyst for Cybertronian society.

Where Ruckley does succeed a lot is in his character work. He writes some interesting takes on longstanding characters, such as a Bumblebee who is more cynical after being expelled from the Autobot security force for unknown reasons. Rubble, the new character and Bumblebee’s protege, serves more as a mouthpiece for readers as he learns more about Cybertron’s customs and society rather than feeling like a real character, but there is a bit of another story reason for that. Optimus is still known as Orion Pax in these days and is the head of the Autobot’s security force, but he doesn’t feature much throughout the story, instead making a few appearances as Ruckley utilizes other and lesser known bots more. But the one character Ruckley does very well with is Megatron, a firebrand of a senator who views the limitations placed on Cybertronians as harmful to their society and legitimately wants what is best for the planet. He’s not the clear cut villain hellbent on galactic domination, but the pieces are placed there for him to naturally grow into that. There is one chapter focusing on Orion and Megatron’s friendship, and how their differing paths altered that friendship, that is the best chapter in the whole book as it delves into Megatron’s ideology and why he wants to lead Cyberton into a new and better age.

One of my complaints reading the single issues in my reviews is that the story often feels slow and nothing of importance happens for long stretches. While that is still somewhat true here, it ultimately reads much better as a collected book rather than single issues. As said, Ruckley is crafting a long game with an intricate narrative so his Transformers really benefits from reading it all together. It helps that this first volume collects the first two arcs of the series, ‘The World in Your Eyes’ and ‘The Cracks Beneath Your Feet’, making the story feel more connected as events on the planet quickly spiral out of control, even in the hands of those manipulating events. It would just be helpful though if Ruckley had begun digging into the backstory of Cybertron’s history somewhere in these issues so readers would have a better idea of why things are the way they are.

The art throughout the book is fairly good with Angel Hernandez, Anna Malkova, Beth McGuire-Smith, Cachet Whitman, Andrew Griffith and Sara Pitre-Durocher on art duties with colourists Joana Lafuente and Josh Burcham. Hernandez gets the bulk of the art in these two arcs and he does a good job on most of the bots’ facial expressions, their movements and action scenes, but a lot of times his bodies look too bulky or like flat blocks when standing still. His landscapes and cityscapes are impressive though as he packs a great amount of detail into Cybertron’s look. Malkova and McGuire-Smith’s artwork is very animated and detailed along with Transformers veterans Griffith and Pitre-Dorocher. All round each artist creates a great sense of movement as the bots fight or transform in panel to panel, giving a good sense of choreography to the book. Lafuente and Burcham’s colours also add a vibrancy to the artwork as they use a lot of variation in their colours, from the bright skies of Cybertron to the darkness of hidden bases or the the different looks of each bot.

Transformers Vol 1: The World in Your Eyes may lack some necessary detail and backstory in the narrative, but Ruckely is crafting an intricate story with a lot of moving parts that work well for the most part when read all together. The artwork from the large team is nice throughout the book as each one makes their own stamp on the series’ visual look. Overall the first volume is a nice jumping on point for Transformers fans as Ruckley is presenting a very interesting new look at pre-war Cybertron with some intriguing takes on familiar characters.