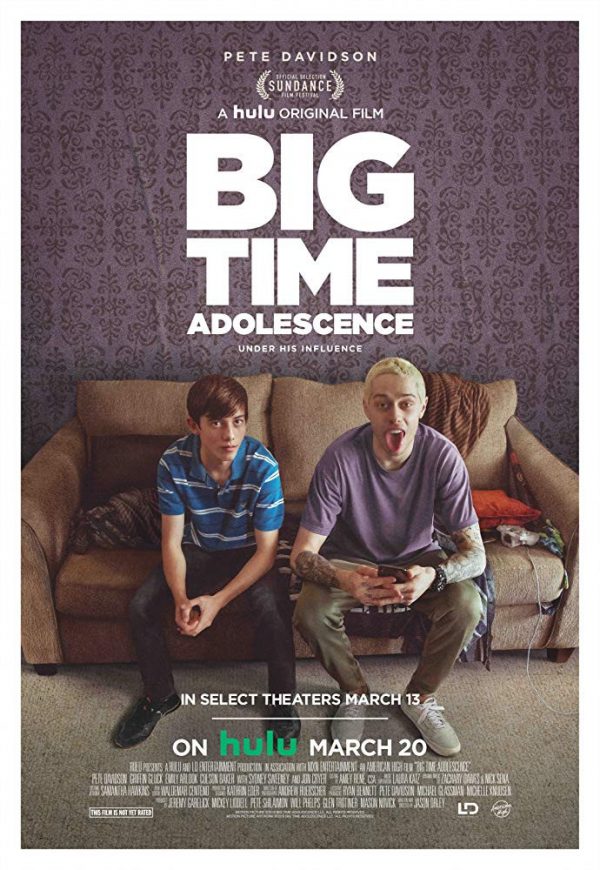 A suburban teenager comes of age under the destructive guidance of his best friend, an aimless college dropout. 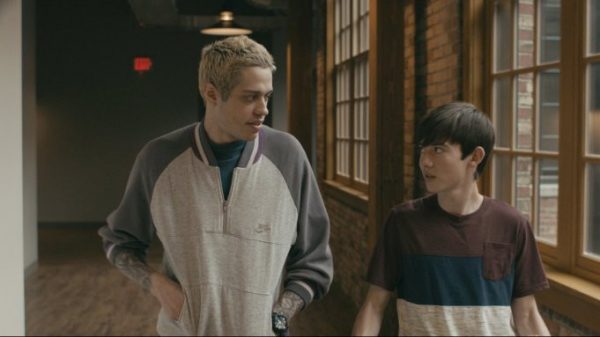 Zeke (played by comedian Pete Davidson in his first major film role) is full of big-time bad ideas in Big Time Adolescence. Not only that, but he’s also in his early 20s and remains having a firm charismatic grip over the now 16 Moe (Griffin Gluck, who can also currently be seen on Netflix’s Locke and Key), and has for six years now (they stayed friends after Zeke got caught cheating on his girlfriend, Moe’s sister, subsequently breaking up).

For writer and director Jason Orley (making his debut feature), it’s going to fall apart without an actor properly capable of embodying what’s on the page for Zeke; an egocentric personality, gaslighting tendencies, chauvinistic ideologies, believably functioning as a slacker alcoholic/pothead, an astounding lack of self-awareness that he is the complete opposite of the coolest person in the room as he surrounds himself with like-minded deadbeats, and most crucially, the magnetic charm to lure these individuals under his juvenile leadership, younger or older. This applies doubly so for Moe, who Zeke latches onto as both a friend and a sentient being to endlessly ramble on about his high school legacy while utilizing his persuasiveness over the teenager as a misguided label that he is hip and totally not a degenerate leech. 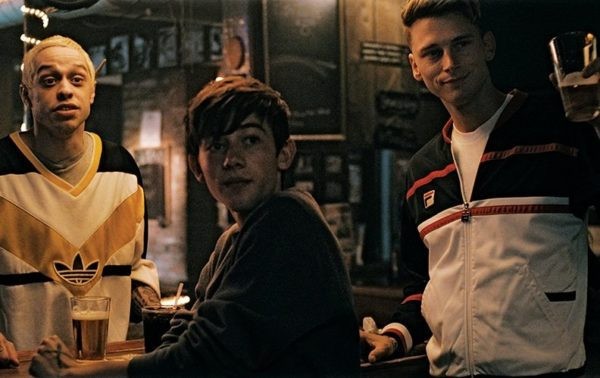 It should go without saying by now, but Pete Davidson is effective with the sarcastic humor, the backtalk, the inappropriate lessons he doles out, and even likable enough as a loser that, from another perspective, he can be seen as fun to be around for all of the wrong reasons. If mainstream studios and prominent comedy filmmakers don’t start sending him scripts pronto, they should be ashamed of themselves, as here he takes a loathsome character and adds layers of allure to his childish antics.

It probably could be explored in more detail, but Moe needs Zeke just as much, having gone his entire life as a loner with no friends his own age (it’s just something we are told in the opening prologue and expected to go along with). Naturally, he doesn’t just see Zeke as good company, but rather a means to grow up faster and feel more mature even if it’s all a façade going over his head. These two are codependent for one another, and as the movie goes on the photography during certain situations symbolically complements that impression. Meanwhile, Moe ends up at parties serving as a drug supplier to fellow minors equipped with narcotics at the hands and encouragement of you know who. He also happens to make acquaintances with a girl his own age named Sophie (Oona Laurence), a shy and sarcastic teenager that sincerely takes a liking to him for who we know he really is underneath all the bad behavior. Without saying much, it’s not long before Zeke starts spouting off unwanted relationship advice that is not only horrible but a real and despicable tactic some men actually use. Zeke may live the least fulfilling version of life (his abode just happens to be leftover from his dead grandma), but he admittedly has a charm on his side, netting him girlfriends that he tends to mistreat and eventually cheat on.

Throughout all of this, there is empathy for Moe; we want him to slowly distance himself from Zeke before he either destroys the sweet bond he is developing with Sophie or even worse, his future. At times I wanted to reach through the computer screen and just start yelling at him to stop paying attention to the loudmouthed loser he is glued to, much like his father Reuben (Jon Cryer) probably wants to. The two central performances from Pete Davidson and Griffin Gluck are outstanding, but the longer the misadventures go on and more frustration is built up for Reuben, Jon Cryer is allowed to deliver a devastating scene expressing his blindness to whatever Moe sees in this sad excuse for a friend. There is a clear big brother dynamic going on between these two (and the characters even comment on it), but there’s a more hurtful dynamic in that Zeke also happens to be a father figure even as Reuben actively does everything he can to connect with his own son. Again, at a scant 90-minutes, it does feel like there is more to pack into Big Time Adolescence (there is a subplot where Zeke begins talking to Moe’s sister again that is crammed in with no grace), and sometimes the lack of responsibility from parents across the neighborhood causes some of the believability of the story to crumble a tiny bit. Even Reuben, who eventually does have a confrontation with Zeke, feels like he’s about 6 years too late with his actions. Still, it’s all just incredibly well cast (Jon Cryer is the secret weapon balancing the immature laughs with dramatic heft) with a lived-in vibe that’s just as fixated on the dynamic between why these two individuals with a sizable age gap are dependent on one another just as much as it is a coming-of-age story.