A bruising CIA operative finds himself blackmailed by a precocious preteen girl when a routine surveillance mission goes very wrong. 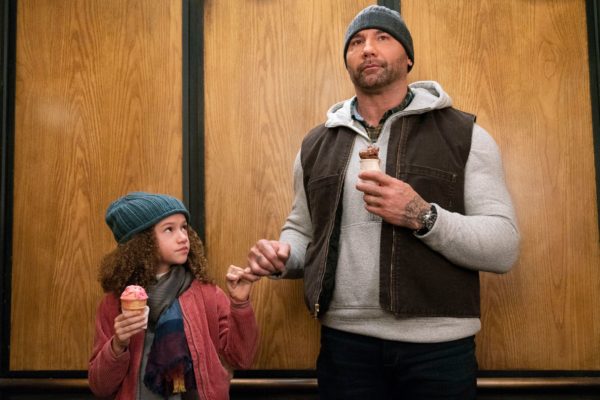 There appears to be a rite of passage of-sorts among wrestlers-turned-actors, to take a sharp left-turn into family-friendly territory, presumably in the hope of expanding their “brand.” We’ve seen it with Hulk Hogan (Suburban Commando, Mr. Nanny), The Rock (Tooth Fairy, Race to Witch Mountain), John Cena (Daddy’s Home 2), and now Dave Bautista with his quasi-remake of the 1990 Arnold Schwarzenegger-starring comedy classic Kindergarten Cop.

While few were clamouring for yet another retooling of Arnie’s uniquely beguiling kiddie caper – we’re still reeling from Vin Diesel’s thoroughly naff The Pacifier – My Spy represents an at times shockingly competent contemporary rendition of its formula. All the more miraculously, this was pulled off with one-man mediocre comedy generator Peter Segal (Tommy Boy, Get Smart) at the helm, and a script penned by the guys behind RED, Battleship, and The Meg.

For a movie nobody surely asked for, My Spy is surprisingly hilarious right out of the gate, if you’re able to accept a plot that’s both perfunctory and absurd. Burly CIA operative JJ (Bautista) finds himself sent undercover to tail the family of a dead mobster, leading to him quickly being rumbled by the criminal’s precocious nine-year-old daughter, Sophie (Chloe Coleman). With Sophie threatening to expose his cover and blow the op, JJ agrees to teach her his spycraft in exchange for her silence. Though hardly a direct facsimile of Kindergarten Cop, the basic plot, thematic, and character beats are nevertheless all there; a crime plot intersected with a dumb brute vs. smart kid comedy, where man and child come to bond as the young’un teases prevailing humanity out of the hardened, seemingly emotionless grunt. Hell, there’s even a scene where JJ flops onto a sofa in almost the exact same way that Arnie does in the 1990 version.

Expectations were obviously low for this one, but the film takes an early diverting turn when, in its first five minutes, a character makes a howler of a joke about Mickey Rourke’s iffy Russian accent in Iron Man 2. It underlines a film that, for all its imperfections, is at least aiming to be more than a depressingly broad family comedy with lame poopypants “humour” and relentless tiresome pratfalls.

Thankfully the screenplay is generally a whole lot more self-aware than anyone could have reasonably anticipated; it’s clearly a film written with a certain affection for the action genre, best indicated by the climactic fight parodying the iconic plane battle from Raiders of the Lost Ark. But ultimately what really makes My Spy work is the highly entertaining chemistry between Bautista and his charming young co-star Chloe Coleman. Deftly sidestepping irritating precocious child cliches, Coleman’s Sophie boasts a cannily manipulative edge which allows her to run rings around JJ, her borderline-sociopathy juxtaposed perfectly with her paradoxical cuteness. We all know how easily a bad child actor can sink a movie, but Coleman’s interplay with Bautista is really quite splendid, even sweet, no matter how eagerly the script clings to familiar plotting.

That’s not to ignore fine work from the ever-brilliant Kristen Schaal as JJ’s long-suffering tech support Bobbi; her and Bautista make for such an inherently head-scratching team that it doesn’t take much effort to tease out the laughs, with Schaal’s increasingly incredulous performance being an easy highlight. She steals pretty much every scene she’s in, as she’s prone to do.

My Spy‘s primary goal was to make the audience laugh above all else, and that it certainly achieved with this cynical husk of a critic. The plot offers no surprises, for sure, nor does it really make much sense; JJ literally outs himself to a classroom full of kids and their parents mid-way through the movie, who we’re then supposed to believe actually kept their mouths shut about it. But it’s clear that the story is really just a skeleton on which to hang the gags, which come flying at the viewer with an unexpectedly high level of success. There are other issues, namely some woefully obnoxious product placement for Doritos, Apple, Oreos, and Waze, which could give Sonic the Hedgehog‘s shilling for Olive Garden a run for its money. But even so, the charm offensive of Big Dave and his pint-sized charge won me over oddly persuasively.

If there’s any one thing My Spy does better than Kindergarten Cop, it’s the tone. While Arnie’s movie begins with a jarring prologue that feels pulled straight out of an adult-skewing action-thriller – featuring a beardy Arnie shooting up a drug den with a shotgun – My Spy plays things a little more consistent, downplaying most potential peril Sophie and her mother Kate (Parisa Fitz-Henley) might be in.

This is certainly a film which will benefit from the low expectations its mere existence invites, and yet, it’s one of the year’s most pleasant surprises so far. It knows what it is, aims modestly at its target, is written with something approaching intelligence, and even manages to be feel-good without getting cloying about it.

A sweet, surprisingly hilarious update of the Kindergarten Cop formula, enlivened by both its self-awareness and the remarkable chemistry between Dave Bautista and his young co-star Chloe Coleman.