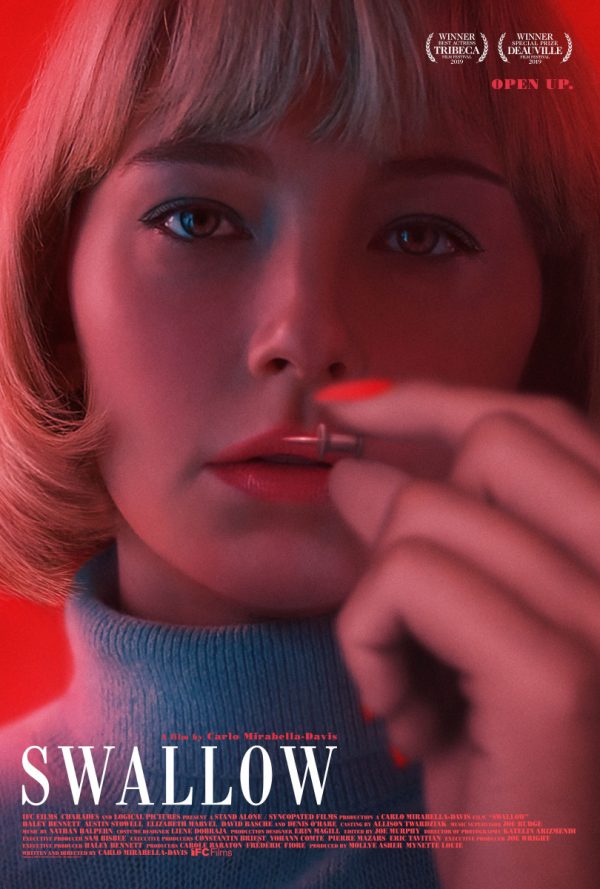 Hunter, a newly pregnant housewife, finds herself increasingly compelled to consume dangerous objects. As her husband and his family tighten their control over her life, she must confront the dark secret behind her new obsession. 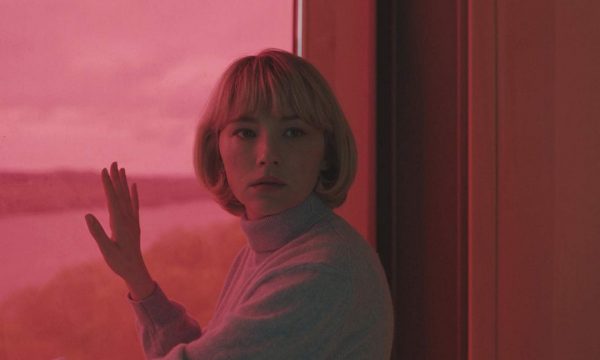 In life, we “swallow” a variety of things. Nutritious foods. Our pride. Foreign objects. Our sorrows. Carlo Mirabella-Davis’ aptly titled Swallow is, ever-reaching, about the act of ingestion both metaphorically and physically. An episode of “MTV’s True Life (I Eat Things You Shouldn’t)” focused on one wayward suburban princess’ raging against the patriarchy machine. Davis’ ingenuity stems from blurring intentions between an act of defiance and masochistic punishment, which allows appearances to remain deceptively proper (long enough). A picture-perfect “home sweet home” exposé that employs twists in unexpectedly gut-shredding and harrowing ways.

Haley Bennett stars as Hunter Conrad, housewife to the successful and well-sculpted Richie (Austin Stowell). On the surface, she has it all. A storybook marriage, spectacular estate, and healthy pregnancy. What more could anyone ask for? Control. The one thing Hunter lacks is a sense of ownership over her own life, until she pops a glass marble into her mouth and swallows it like a pill. The act is Hunter’s secret; she radiates with glee. Alas, struggles persist when quirky compulsion becomes an addiction. Then Richie clues into his lover’s oddly dangerous habit and once again assumes control – especially with a baby on board.

Here’s the beauty of Swallow. Expectations of grotesque body horror glimpses don’t align with the film’s actual goals. This is, quite faithfully, a character study with Hunter under a microscope. Davis is more interested in *why* his expecting protagonist would gulp down figurines and batteries – not gory details about what comes after. On the most superficial reading of events, Hunter *finally* claims something all to herself that every male in her vicinity eventually attempts to regulate, subside, and steal away. Once you begin to realize Richie might be more bothered by Hunter’s “weirdness” impacting his own status over her well-being, chills and unease emerge. A clever trick given how we’re fixated on the taboo at hand. 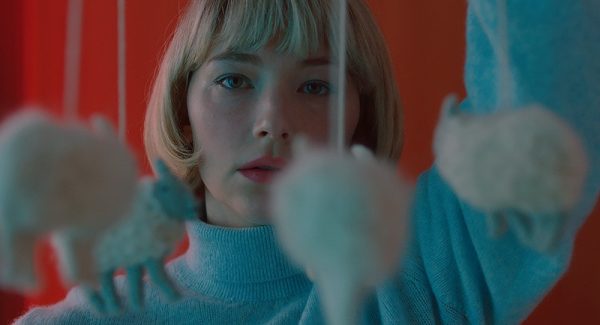 Don’t get me wrong – there are some squeamish instances where blood is drawn. Hunter’s oral exploration shies not from indigestible items such as safety pins or tacks. Although, once again, Davis allows our imaginations to do the heavy lifting when it comes to ghost pains in our intestines or scratchiness in our esophagus. Visual cues are there – we see objects enter Hunter’s salivating mouth, then completely passed out the other side – but by withholding in-between moments where Hunter might be writhing in immense pain or doing nothing, we’re left to fill in glaring blanks. It’s an effective tool, and while possibly not representatively faithful to the real world condition known as “Pica” – a psychological disorder characterized by an appetite for substances that are largely non-nutritive – Davis grounds Hunter’s rebelliousness with identifiable power.

Maybe that’s because Haley Bennett so effectively plays the all-American spouse from submissive 60s handbooks. Her wardrobe shines a pastel perkiness, mood always chipper as to not worry Richie, and actions from a subconscious place of servitude. Then, piece by piece (into her stomach), she takes back individuality but in secret. Afraid of what Richie may think, how he’d react, caught in this intimate cycle of complacency within someone else’s dreamland bubble. Hunter’s self reclamation as she lines up her “trophies” each time a new trinket makes its flushed-out voyage is such a revealing journey that Bennett masterfully owns. Feelings of entrapment eventually burst free, like the children’s jack in her gastro-tubing that, well, you catch my wordplay.

If any tonal indication is required, Swallow opens on a woolen lamb being sliced across the neck, blood spilling out, to a smash-cut of ruby read lamb meat served for dinner. An ugliness we wouldn’t normally acknowledge or visualize when staring at a juicy chop plated with 5-star appeal. This translates directly into Hunter’s torment; a women handed everything whose itching under her skin for an escape. She knows she should be grateful, but conforming to Richie’s narrative – overseen by snobby parents played by Elizabeth Marvel and David Rasche – is not solve-all happiness that can erase her ambitions, her livelihood, and most importantly her past traumas that come to light (again, what we wouldn’t normally acknowledge). All smiles and postured presentation in public, for the sake of Richie, but Hunter hurts – and no one seems to pay much mind.

Erin Magill’s production design feels like a dollhouse. Too symmetrical and kitschy for reality. From birthday parties where hors d’oeuvres make rounds to Hunter’s interior decoration that bursts with artistic vitality. She’s a beam of sunshine when she wants to be, as promoted by her domestic charms. Nathan Halpern’s score undercuts with more ominous notes, but soundtrack selections still slap easily bop-along tracks overtop Hunter’s more upbeat showcases of comfort. Instances that stick in your brain as you might ponder why such a “normal” person would voluntarily risk pain, punishment, and possibly death – for her and her child – with such reckless regard.

The answer, of course, becomes systematically clear in the film’s closing scenes.

Swallow exists as such a clever and condemning allegory it’s almost infuriating (in the “wow that’s top-notch” way). Carlo Mirabella-Davis may take some liberties when fitting “Pica” to imprisonment storytelling, but his saving grace is executing with minimal flaws. Haley Bennett, who also serves as Executive Producer, lives to rescue Hunter from horrors not visible to the untrained eye. What a brilliant thematic double-feature you could program by leading Swallow into Leigh Whannell’s The Invisible Man. Both thematically intertwined when reimagining how relationship expectations can feel like our own personal hell (appearances aren’t everything), and how different personalities choose to handle their respective “shit.” Swallow, quite ruminatively, the soft-spoken rule abider that firmly, and decisively, dares to step out of line despite marching orders.