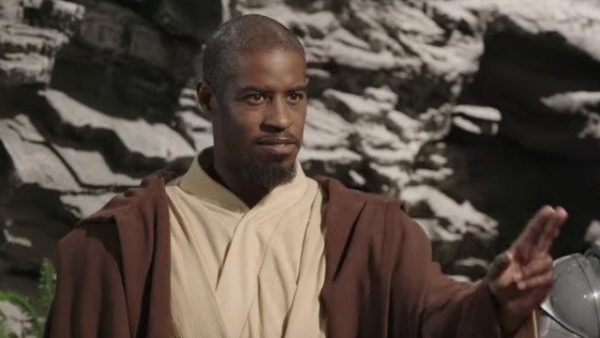 Originally announced back in December, Lucasfilm’s Star Wars: Jedi Temple Challenge begins next week, and a new trailer has been released which features Ahmed Best – a.k.a. the Prequel Trilogy’s Jar-Jar Binks – who makes his return to the galaxy far, far away as the game show’s host, the Jedi Master Kelleran Beq.

Star Wars: Jedi Temple Challenge will “test young contestants’ abilities in the core Jedi principles of strength, knowledge, and bravery as they face thrilling and fun obstacles in an attempt to achieve the rank of Jedi Knight.”

Best’s Kelleran Beq is joined in the show joined by his droid companion AD-3 (voiced by Veep’s Mary Holland), while Star Wars: The Clone Wars’ Sam Witwer portray the disembodied voice of the Dark Side of the Force.

Jedi Temple Challenge was originally announced for Disney+, but will instead be made available free to all through StarWarsKids.com and the official Star Wars Kids YouTube channel, with Mickey Capoferri, Lucasfilm’s senior director of Online Content & Programming, stating that:

“With so many children and families home and looking to Star Wars for hope and entertainment, we wanted to make Jedi Temple Challenge available to as many young fans as possible by airing the series on our Star Wars Kids network for everyone to enjoy.”

Star Wars: Jedi Temple Challenge will premiere on June 3rd. Let us know if you’ll be tuning in…