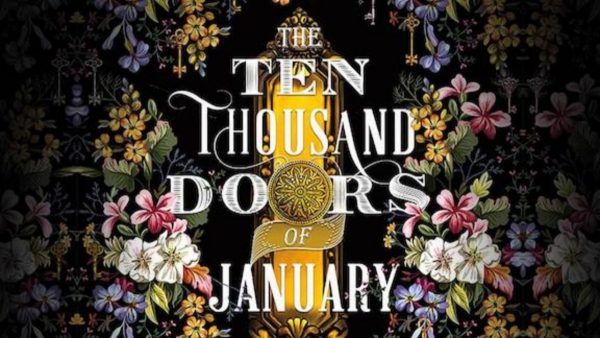 The Ten Thousand Doors of January is an adventure story about growing up and finding out who you want to be. We follow the life of January between the ages of 7 and 17 as she discovers that her life is full of secrets and lies. Aged 7, January finds a door when she is on a trip with her guardian, Locke. The door leads to a different world, one full of sunshine, but when she goes back the next day, the door has been destroyed.

January does not live the life of a typical child from 1907, as she is rebellious and inquisitive. January is also seen as other, as she is a mixed-race child who is being looked after by a very rich white man. January’s father works for Locke by sourcing rare antiquities for him. As her father becomes more distant and is away from January for longer periods, January looks to Locke for care and guidance as he is always there for her. Although January is seen as a curiosity by Locke’s friends rather than being part of his world.

At 17, January finds a book full of stories that let her know there are many more worlds than she ever knew existed. It reminds January of what happened to her as a child. January gets to read about people who don’t always conform to what is expected of them, including the story of Ade Larson, who once met a boy from a different world. Because of this Ade ends up going on a journey to numerous worlds as she searches for the door that will take her back to him. This book gives January the confidence to see the reality of her own restrictions and the conspiracy that surrounds her.

January goes on a journey to find out who she really is, but finds that by leaving the safety that Locke has provided, the world is a much darker and dangerous place to be. January knows that she needs to find a safe haven, but it seems these are few and far between as she is hunted for not only what she knows but also what she is discovering she can do.

This book takes you on a quest as January struggles with the truth of her situation. It is enjoyable seeing how the book glides effortlessly between January’s story and that of Ade Larson. It has a satisfactory ending as she realises that the truth is what you make of it. The other worlds glimpsed through the doors are imaginative and the society that Locke and his cohorts run is truly terrifying in its need for control, but this is January’s story and with it, we are shown a tale of courage over adversity.