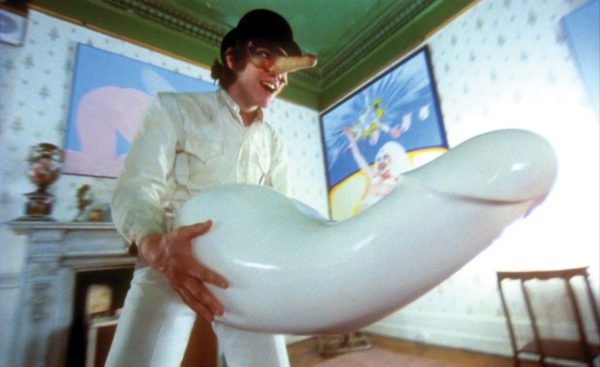 In a future British society law and order has completely broken down allowing gangs of youths to roam the streets looking for trouble. Arrested for murder, gang leader Alex Delarge is reconditioned and set free into this hostile and unforgiving world.

Stanley Kubrick’s A Clockwork Orange, based on the 1962 book by Anthony Burgess, resulted in a media frenzy upon release due to its strong violence (for its time) and alleged copycat rapes/killings. The film centers around Alex (Malcolm McDowell), a Beethoven loving juvenile delinquent who enjoys indulging in rape and violence with his gang. After drinking milk spiked with drugs, Alex and his gang embark on ‘a bit of the old ultra violence’. They start by beating up a tramp and a rival gang before invading the home of a political writer, crippling him and raping his wife. 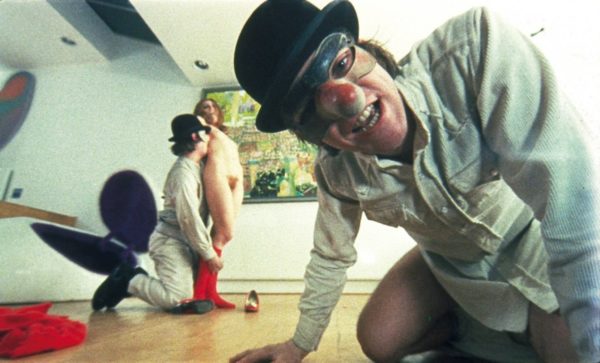 On a later break in, Alex kills the cat lady fitness fanatic, is betrayed by his gang and captured by the police. In prison, Alex undergoes a new type of aversion therapy in which he is rendered incapable of committing any kind of atrocity. This is achieved by injecting him with medication and forcing him to watch films featuring rape and violence. His violent and sexual impulses are now thwarted by feelings of nausea as is his love for Beethoven.

When released, Alex is set upon by his previous victims including two of his former gang members who almost drown him in a water trough. Alex then stumbles upon the house of the writer whom he had previously crippled and whose wife has died as a result of the attack. When the writer eventually recognises his assailant, he drives Alex to attempt suicide by playing Beethoven on two large speakers. Alex recovers in hospital and the aversion therapy is discredited. The film ends with the suggestion that Alex will resume his old ways. 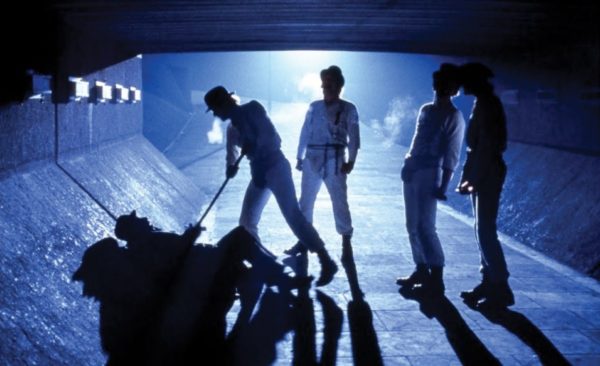 A Clockwork Orange ran in London’s West End for over a year when Kubrick decided to withdraw it from distribution in England in 1973. Hurt and offended by constant media attacks and threats to himself and his family, Kubrick no longer wanted to be blamed for the problems with society. The film’s distributors Warner Brothers had a good relationship with Kubrick and respected his wishes. Somewhat ironically, due to Kubrick’s unwillingness to speak to the media about his decision, Anthony Burgess was often badgered by them each time a crime occurred supposedly influenced by the film. Kubrick’s ban on the film was enforced until his death in 1999. The film was then re-released uncut with an 18 certificate in the year 2000.

It is easy to see why the film was passed uncut as Kubrick was a renowned director and his film was seen as important in the debate about violence and free will. Alex’s rape of the writer’s wife was implied but not shown. The rival gang who were beaten by Alex and his friends were interrupted whilst attempting to gang rape a girl who managed to get away. The actual gang rape of a girl in one of the films Alex was forced to watch during his aversion therapy resulted in feelings of nausea for Alex. These scenes often implied but did not depict explicitly or promote sexual violence. 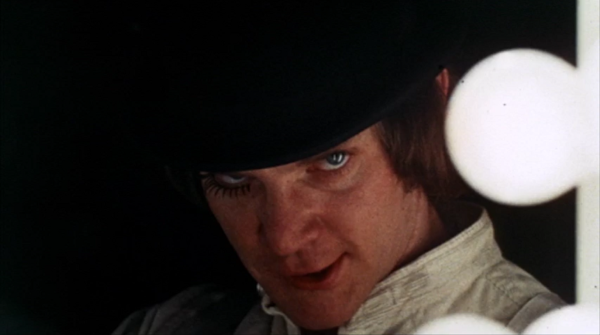 Alex is a very charismatic lead though worryingly is the only real character in the film as everyone else is distinctly one dimensional and unsympathetic including Alex’s victims. The crippled writer is a very twisted and depraved old man and no sympathy is felt for him. After Alex is captured and sent to prison the pace of the film slows down considerably. Here, Kubrick adopts his more conventional clinical style effectively distancing the audience and dragging the film to its conclusion. Whilst the film’s opening scenes have retained much of their power (youths today are known for dressing a certain way, speaking in a specialised language and engaging in violent acts for fun), the rest of the film has dated.