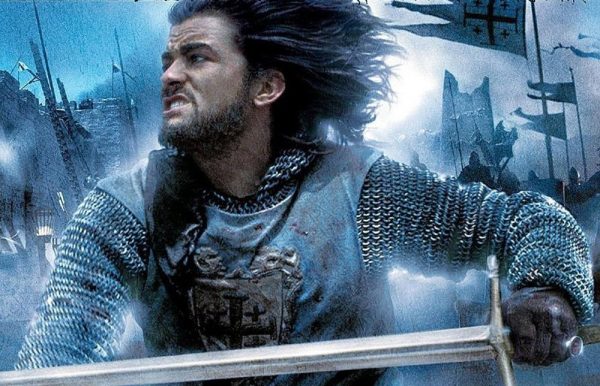 Like the plight of Jerusalem’s dwindling forces as they struggle to hold off a 200,000-strong Muslim army during the film’s final third, Kingdom of Heaven was fighting a battle it was always destined to lose.

Arriving just four years after its director’s landmark sword-and-sandal flick Gladiator won big on Oscar night, Kingdom of Heaven found itself buried deep in a sandstorm of historical epics hoping to piggyback on the success of Scott, Crowe and co. Much like the violent games of ancient Rome depicted so graphically in the film, studios had paraded around potential successors to Gladiator’s crown, only for them to swiftly receive a near-unanimous thumbs down verdict from critics. Between movies like Troy and Alexander, attractive spectacles boasting sword-wielding star power and spectacular hairstyles — from Brad Pitt to Eric Bana to a bleach-blonde Colin Farrell — ultimately failed to usher in a new golden age of genre cinema. In the space of eight years, what had begun as an exciting re-invigoration had rapidly turned to tepid imitation, before Zack Snyder’s stylish, enjoyably excessive abdom-athon 300 became the gateway for the final transition to abhorrent parody in the form of 2008’s Meet the Spartans. 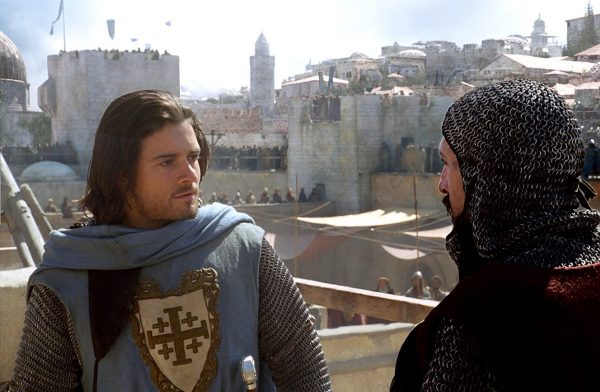 While not strictly a sword-and-sandals film, Kingdom of Heaven was nevertheless tarnished by the same bloody blade. A lukewarm response critically was reflected in a disappointing box office return (a global take-home of $218,122,627 from a budget of $130,000,000). In a post-Gladiator, post-Lord of the Rings era, it seemed Kingdom of Heaven was simply not up to scratch.

But just like the sweeping underdog story at its centre, a heavily fictionalised account of lowly French labourer Balian of Ibelin (Orlando Bloom monopolising the early noughties market for actors playing sullen blacksmiths who become heroes) who journeys to Jerusalem and returns a lauded Knight, Kingdom of Heaven has garnered a more renowned reputation in the years following its initial release. 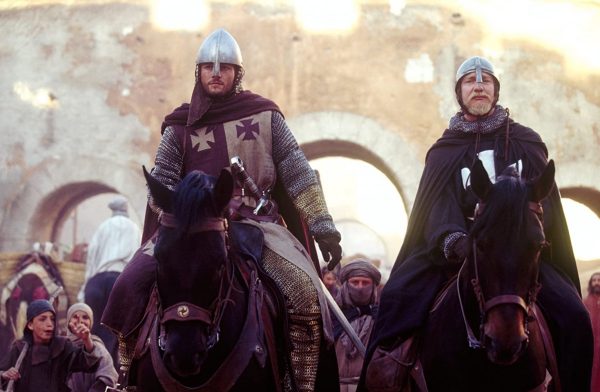 Six months after the theatrical version received a largely indifferent response, Scott released his Director’s Cut: now cited by many as the film’s definitive version. Reinstating 50 minutes previously disposed of during the edit, Scott’s film finally became worthy of its historical epic label, resolving several of the film’s notable incoherencies while also serving as both an important reminder of the power wielded by the Hollywood studio system, and a cautionary tale of mis-marketing. From its trailer alone, Kingdom of Heaven had initially been framed primarily as a rousing adventure story blended with action and heterosexual romance. In both its theatrical form and leading man’s performance, it was a handsome but ultimately shallow endeavour.

In the 15 years since its release, however, Scott’s unaltered Kingdom of Heaven has come to represent much more than a beautiful, bland exercise in narrative conventionality. Under the guise of a 12th Century period piece, the film instead offers an intriguing examination of contemporary religious conflict and international relations in a post-9/11 world. 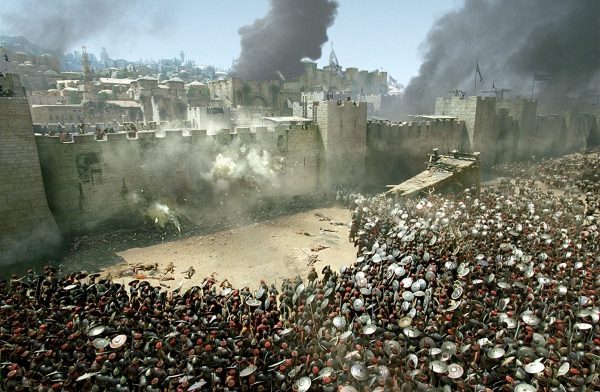 When Balian arrives at the acclaimed lands of the film’s title, it’s not salvation or liberation he finds, but a civilisation poised perennially on a knife’s edge. King Baldwin IV (an uncredited Edward Norton), the leprous Christian monarch, and Muslim sultan Saladin (Syrian actor Ghassan Massoud) are locked in a dispute with centuries worth of violence behind it. There exists a truce, but with the religious rule of Jerusalem having passed back and forth between the two groups for generations, conflict between the Christians and the Muslims, between the East and the West, seems inextricable and unresolvable. But a reluctance for unnecessary bloodshed is something both men share; a willingness for negotiation and compromise.

In 2005, a year where films like Spielberg’s War of the Worlds depicted America under siege from destructive alien forces and Crash’s Best Picture Oscar win rewarded a film that seemed to reinforce bigoted stereotypes, it’s refreshing that Kingdom of Heaven astutely refrains from wholesale vilification in its handling of religious conflict. 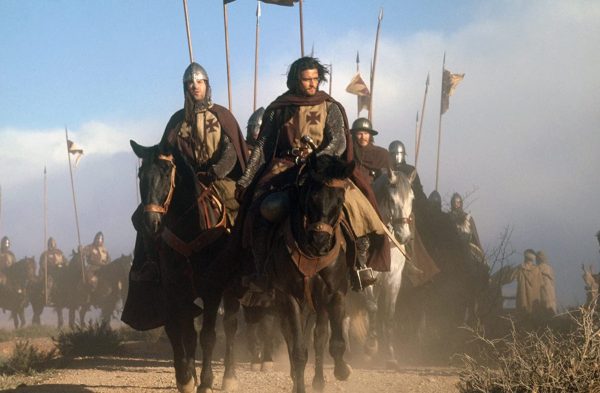 Balian, a non-believer since the suicide of his wife, embodies the neutral ground where Scott hopes his audience will position themselves. His motives in Jerusalem don’t appear to stem from a desire for wealth, notoriety or religious dominance, but from yearning for personal fulfilment and collective progress. “What man is a man who does not make the world better?” he recites from the inscription in his workshop.

From such a vantage point, Kingdom of Heaven looks to present peaceful coexistence between Christians and Muslims as a distinct possibility, were it not for the despicable acts of a handful of extreme, warmongering individuals, who in Scott’s film take the form of treacherous Templar Knight Guy de Lusignan (a snarly Marton Csokas) and the belligerent Raynald of Châtillon (Brendan Gleeson). Together, they provide the fuel to ignite the fires of all-out war. But, even under the facade of Christianity, it’s not difficult to discern the thing that truly drives these men. “I will have the glory” the former taunts Jeremy Irons’ Tiberias. “You had yours, years ago. It’s time for mine.” 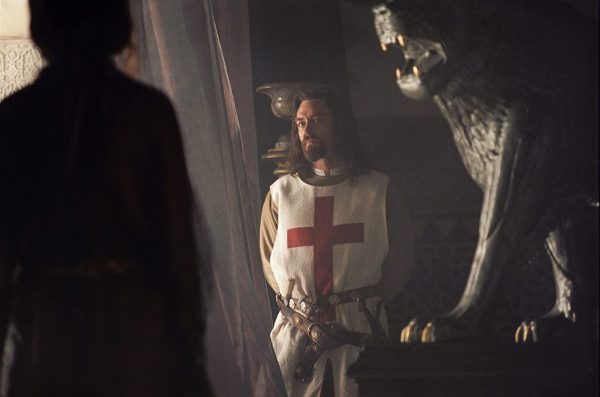 And so what follows is a series of brutal, graphic conflicts: lengthy and bloody battle sequences that, while visually arresting, seem to revel in the detail — burning, throat slitting and dismemberment — and appear to skew the peaceful message that the film looks to advocate. Then again, perhaps the moral murkiness of Scott’s film is entirely deliberate. Perhaps the graphic, gruesome battle scenes are a double-edged sword: showcasing the film’s Jackson-esque cinematic grandeur while simultaneously channeling a much darker, pessimistic world view. Ultimately, Balian’s selfless attitude and heroic efforts do little to change a culture of conflict — during a climactic showdown laced with irony, it’s only by meeting the forces of Saladin head on, and by suffering heavy casualties in the process, that he’s able to agree terms for the liberation of Jerusalem’s people. In the end, it is the cyclical, inevitable nature of violence that reigns victorious. Freedom and momentary peace, it seems, first requires a rather hefty cost.

And it’s this bleak message the film leaves audiences to ponder. An epilogue notes that “nearly a thousand years later, peace in the Holy Land still remains elusive.” In the 15 years since Kingdom of Heaven was released, a period no less troubled by power-craving individuals, amity anywhere on earth remains no more attainable.