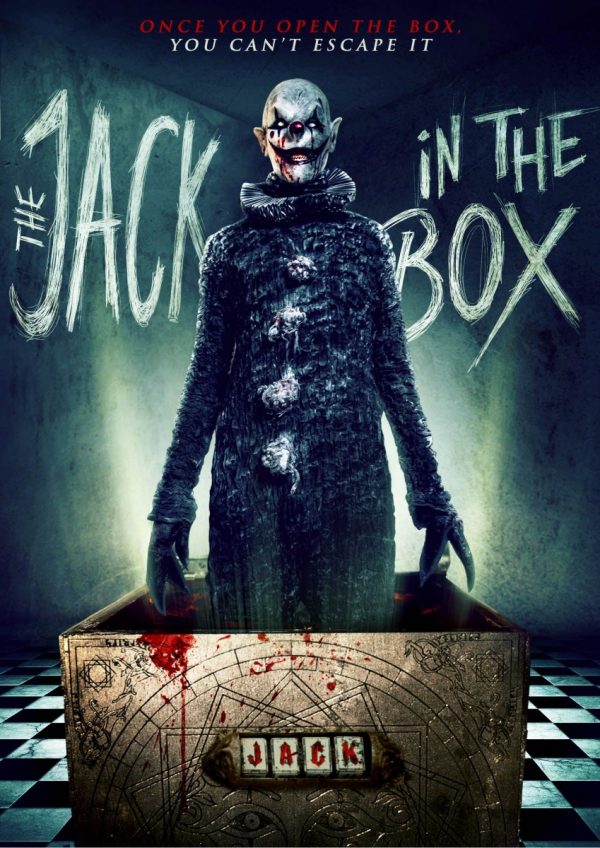 When a vintage Jack-in-the-box is un-earthed and opened, it’s new owners soon have reason to believe the creepy clown doll within has a life of it’s own.

Lawrence Fowler’s The Jack In The Box is a victim of two truths that are circumstantially at-odds. Number one! Fowler’s golden cube represents potential both in exterior appeal and what resides within. Numer two! By golly, we’ve endured fifty thousand paranormal stories with the same interchangeable premise. An old-world hellspawn manifests as a demonic clown whenever it wants, but “whenever” becomes problematic. The more Fowler explores his monster’s “must consume six souls” inner workings, the more he loses grip of a horror conundrum no more profound than the basest supernatural occurrences. Truth be told? Enticing concept, derivative execution.

American Casey (Ethan Taylor) finds employment as an overseas curator for a small-town historical museum. When rifling through stashed-away artifacts, he dusts off a Jack-In-The-Box that provokes sinister gazes. Co-worker Lisa (Lucy-Jane Quinlan) helps ensure that Casey’s new toy is placed front and center for paying customers, but then deaths start occurring. Casey tries to warn mangers and lawmen, yet no one believes his rare Jack-In-The-Box could be responsible for multiple slayings. What fools.

Real talk? The Jack In The Box rocks its playhouse design and crushes the demon container’s “Jack” conception. Fowler offers horror fans a blend of Pennywise and your least favorite antique dolly atop grandma’s bookshelf. Jack’s eyes, dead but fixated, are an unsettling instigator of terror and servitude that creates a petrifying illustration of villainy. Wholly a positive? Alas, no. Fowler’s shadow lurker promises figure-outlined ferocity that never shoots up your spine. Thank convoluted rules and a milquetoast lead protagonist.

Out the gate, The Jack In The Box promises what it can’t deliver. Springy nightmare puppets give way to a “Jackestemarra” entity who crawls forth from its eternal prison, emerging claws-first, and yet horror somehow escapes. Mischievous smirks translate into soul-eviscerating clown creaturification; however, Fowler isn’t able to extract inherent genre despicableness. Jack deserves a more glorious path to ruined innocence, yet Fowler channels no such notability beyond Casey’s odd personal journey marred by regret, insomnia, and weakly foreshadowed setups.

Matted makeup, inhuman gait, frilly onesie – The Jack In The Box sells its antagonist. What Fowler struggles with are world-building restrictions and Casey’s judgment. Between a monster whose abilities require scene-by-scene explanations and Casey’s dunderheaded detective work, so much tension vanishes. The Jack In The Box barely ousts a billion comparable knockoffs with haunted antiques and gnarly creature designs. Unholy Jack is a red-nosed sight that’ll keep viewers flicking lights on all night, no doubt. What’s disappointing is Casey’s by-the-books defensiveness and multiple characters who befall the most scripted of norms.

To be fair, patience with The Jack In The Box lasts far longer than requirements deem. My appreciation of international aesthetics stokes curiosity that goes unrewarded when Jack comes to play, but “Nightmare At The Museum” foundations are solid. Casey’s artifact belongs in Ed and Lorraine Warren’s possessed trinket room, but the ensuing paranormal warfare fails even the simplest of babysitter stories. Imagine the frustration when deaths are reduced to cloven hands grabbing crooks or a severed foot resting where something atrocious assuredly took place. Casey is a basic horror archetype, down to his motive behind insomnia. Even that requires a non-existent explanation (why his girlfriend wouldn’t dial 9-1-1), but we’re only here for bastardizations of the seemingly safe. Not great ones, either.

The Jack In The Box boasts a righteous concept, better “exhibit of the cursed” appeal, but won’t birth Hollywood’s next “killer object that should not be” classic. Jack’s personification is an obvious highlight, yet supporting development is no more elevated than introductory genre knowledge. I want to dig this pop-goes-the-weasel freakshow more than off-camera deaths allow, especially when it comes to Casey’s inability to combat his manifested demons. There are so many better functions worth this puzzle-box from Hell’s utilization, given how Lawrence Fowler can’t quite crack Jackestemarra’s code.