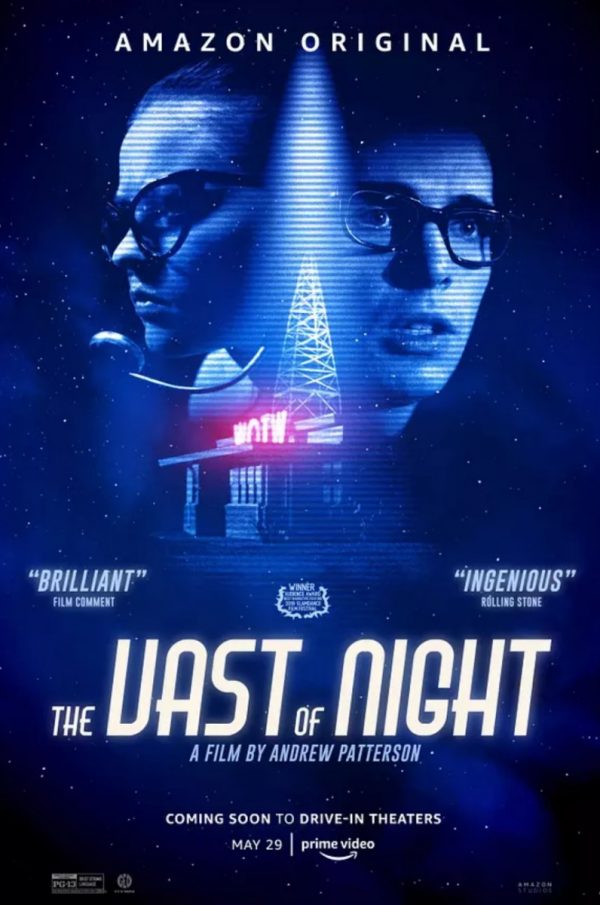 In the twilight of the 1950s, on one fateful night in New Mexico, young switchboard operator Fay and charismatic radio DJ Everett discover a strange audio frequency that could change their small town and the future forever. 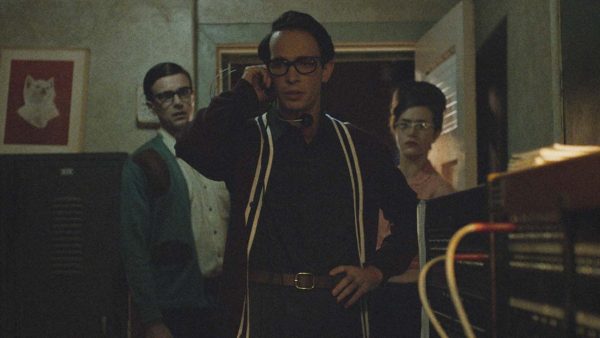 The Vast Of Night is a jam-packed cinematic time capsule. Something that could have been buried by Rod Serling then dug up by Ron Howard, or J.J. Abrams, or heck, even both. Director Andrew Patterson’s nostalgia-inspired feature debut is a “blast from the past” homage to radio-play science fiction. A time when the unimaginable beyond, the inconclusive unknown, provides all the fantastical engagement an audience will require. Patterson ditches Elysium-dollar budgets and interstellar gunfights for a wholesome slice of cosmic fascination emboldened by small-town simplicity. No destruction of American monuments, Death Star moons, or photon cannons required to ensure watchers remain dialed into an extraterrestrial drama that asks all the right questions.

It’s the 1950s, in a small New Mexico suburb not too far from the southern border. Radio DJ Everett (Jake Horowitz) and switchboard operator Fay (Sierra McCormick) are the only townies not attending a local scholastic basketball game. Fay’s fulfilling her wire-crossing duties when she picks up a rogue frequency – the same one that interrupts Everett’s broadcast. As their friends and family cheer on the home team in a packed gymnasium, Fay and Everett investigate the sonic chatter after strange reports of unidentified flying objects. A story this juicy could be their ticket to fame, if not a total hoax.

Writers James Montague and Craig W. Sanger embrace period-dapper “restrictions” for their less technological, more inquisitive values, but Patterson goes one step further by replicating the 50s viewing experience. Opening and closing credits project onto a vintage television with black-and-while tracking fuzz, presenting The Vast Of Night as this weekend living-room-filler special (of the era). Specific sequences pull backward as characters deal exposition, illuminating the monochromatic tints of colorless screens that clue into the existence of radio signals in all forms. It’s a connection between the film’s central conflict, this unplaceable pitch, and the possibility that our devices could find something similar. It’s not just an aesthetic choice. Patterson blurs narrative fiction with the antennas in our own homes, as an open-ended suggestion that tickles “somewhere out there” curiosity – never distracting, in fact, quite clever. 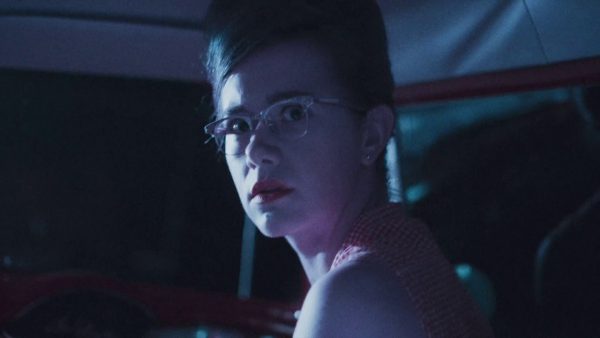 While plotting is relatively linear, it’s the chemistry and charisma of both leads that impress past their 50s get-up. Jake Horowitz and Sierra McCormick wear their thick-rimmed Buddy Holly spectacles while darting around an empty ghost-town, sleuthing like junior detectives. Horowitz is an affably witty interview specialist, and his little-sister-like care for McCormick’s chaser of dreams forms an instant bond. Substantial supporting interactions are scant – an over-the-phone voice (Bruce Davis) and an abduction believer (Gail Cronauer) – which leaves performance focus on Patterson’s two young leads. Always ready for the task, chewing antique scenery while getting lost in the vastness of one predictably astonishing night like a 50s X-Files episode.

What’s so rewarding about The Vast Of Night is how Patterson’s direction means to playfully and inquisitively question *if* aliens exist. That’s all. Everette and Fay listen to crackpot theories and scamper about in total isolation, which limits conclusive answers. Audiences await payoff in the form of aerial proof of spacecrafts or another broken heart if Everett’s efforts reveal nothing but random receiver static. Dialogue hints at the most mundane but comprehensive explanations as characters reason why aliens avoid densely populated cities, favor rural separation, and only hover close when localized events steal everyone’s attention. It’s such a humorously coincidental admission that makes every lick of sense, but, luckily, Everett and Fay are poking around where they shouldn’t. Patterson isn’t here to cheat viewers. There’s an added level of sincerity to it all since we’re bearing witness to softer sci-fi elements that still seem once-in-a-lifetime special.

When it comes to textbook sci-fi throwbacks, The Vast Of Night exceeds expectations. Andrew Patterson strips away overcomplicated Starfleets or planetary warfare to hone in on the core wonders of conspiracy exploration. Two humans, chasing audible connected dots, slowly unraveling the universe’s grandest mystery all before an inter-city basketball game’s final buzzer. Don’t expect the flashiest or zippiest close-encounters tale, but erase any “slow” or “boring” doubts. There’s nothing more fulfilling than exquisite, full-bodied storytelling, no matter a visual or verbal entertainment medium. The Vast Of Night just so happens to be proficiently established in both.