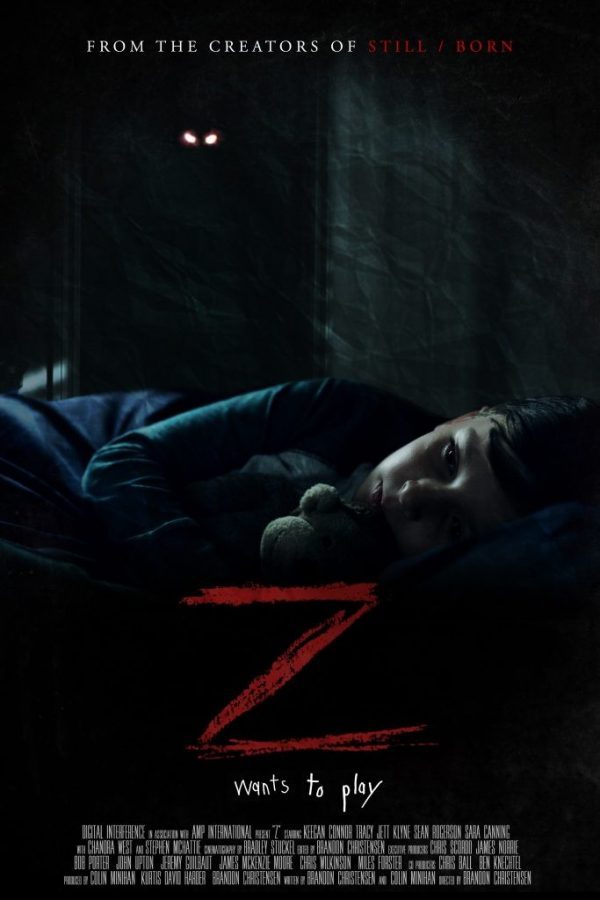 A family find themselves terrorized by their eight-year-old son’s imaginary friend.

An imaginary friend brings with it stigmatic labels, inherent horror, and farfetched uncertainty. Brandon Christensen’s Z addresses how fabricating your own best friend can go wrong in all those ways. The psychological assessments, the unhealthy attachment, the unnerving reality that some invisible being is tailing your child like a shadow. Spooky any which way you slice, no? That’s what Christensen and co-writer Colin Minihan hope by conjuring a nameless entity that goes only by an alphabet letter. A simple moniker for a simple monster, and simple take on paranormal play pals who demand attention at all costs.

Elizabeth Parsons (Keegan Connor Tracy) is living her American dream alongside husband Kevin (Sean Rogerson) and son Joshua (Jett Klyne). Her picture-perfect bubble bursts when Joshua is suspended indefinitely from elementary school. Reports of violent outbursts, harsh language, and insubordination are the cause, but little Joshua passes the blame. To whom? His made-up friend “Z,” who instigates all Joshua’s worst behavior. Elizabeth and Kevin think nothing of their baby boy’s rambunctious phase until strange signals point towards a very unbelievable conclusion: “Z” ain’t imaginary. He’s real, and he’s no role model.

Since “Z” goes primarily unseen, we rely on Joshua to convey horror by barking “Z’s” orders or acting on inaudible instructions. In this regard, Jeff Klyne fulfills his duties as yet another “oh hell no, that child be creepy” genre device. In my opinion, Z is better when Joshua steers conversations because there’s no predicting his dedication to this new best friend until the end. We identify the maliciousness “Z” is capable of manipulating, but also the joyful pipsqueak by his side who’s giggling while playing with toy soldiers after a classmate suffers an unsightly injury. Jump scares you can behold; there’s a visceral reaction to terror. What we can’t gaze upon or hear, “Z’s” daily chatter, holds more considerable suspense given we’re never sure what punt-sized Joshua is capable of achieving.

On the flip, Z requires an augmented or suspended belief system when accepting Elizabeth and Kevin’s indulgence of “Z’s” existence. So much wasted food since Joshua refuses to eat meals without a duplicate serving for “Z” in front of his “empty” dining room chair. Multiple interactions where “Parents of the Year” Elizabeth and Kevin hold secrets from one another, be it prescribed medication or hidden “red cards” that catalog each one of Joshua’s classroom offenses. Kevin abides by the “boys will be boys” formula of parenthood, while Elizabeth becomes the “bad cop” for suggesting all is not right in Middlesville, Suburbia. Reactions or consequences don’t always align with the events on-screen, especially when family members ignore violent atrocities over spaghetti and meatballs.

“Z,” the creature, is never as petrifying as the “Z” we create in our heads – especially since his appearances are scarce. Z is a story about comfort zones and control (or lack thereof) that requires our imaginations to max-out creative heavy lifting because visuals can’t always match our worst nightmares. We glimpse “Z’s” figure in multiple forms, which brings into question if appearances differ based on the strength of each target’s fantastical connection – which is never adequately addressed. This is where Christensen fumbles a bit, as glowing eyes in a doorway and bathtub splash-screams overshadow possible development angles. What we see never trumps what our brains fill-in like a James Wan Mad Libs, especially given the few instances we’re allowed to catch sight of gangly, caveman-cretin “Z.”

Special effects are a mixed bag of horrifying demonic recreation and some weak-ass inferno replication. “Z’s” bathtime cameo is equal to a dining room stare like something out of Insidious, but even these more accomplished reveals are mere morsels. Other altercations work to hide “Z” on purpose, as he yanks Joshua into the darkness and out of sight to save some post-production costs. Scares revolve around nighttime shadowplay, but they’re inconsistent. One minute we’re left mouth agape, stunned by a body drop unlike anything I’ve seen since [REC], but the next, we’re feeling cheated by “Z’s” penchant for lurking behind locked doors. “Z” seems underutilized, possibly by design. Is this real life? Is it just fantasy? Christensen can’t choose between in-your-face apparition horrors or more psyche-driven questions of stable comprehension, which clash more then they complement one another.

Out of decency, my spoiler-free thoughts on a third-act dynamic shift land on “approvable.” Z isn’t genre-defiant or groundbreaking by any stretch but does subvert certain tropes that other films struggle to escape like quicksand. Where Brandon Christensen has more to say in Still/Born, which is also definitively scarier, Z makes for an easily streamable Saturday-night squealer as long as viewers don’t mind subgenre familiarity. Christensen gets lost in his supernatural world, breaking rules characters may or may not introduce, and yet there’s still a wicked wonderment that heightens “Z’s” appeal. You’ll jump a few unexpected jumps, pray for the bond between mother and son, then either lose complete interest or find yourself under a spell of intrigue once conflicts reach their conclusive final stage. It won’t be for everyone but will be for some. Not exceedingly profound, but undoubtedly competent in terms of hereditary horrors of the invited variety.