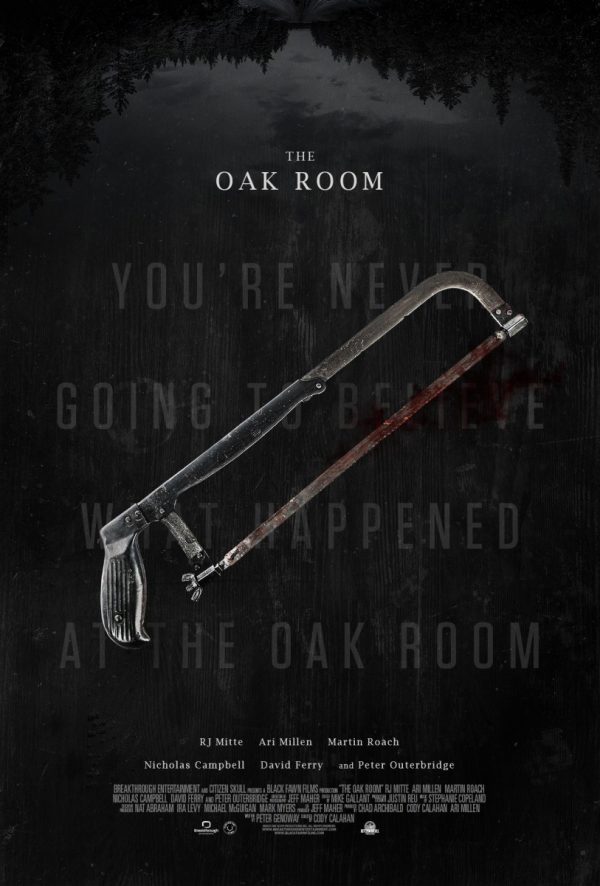 During a raging snowstorm, a drifter returns home to the blue-collar bar located in the remote Canadian town where he was born. When he offers to settle an old debt with a grizzled bartender by telling him a story, the night’s events quickly spin into a dark tale of mistaken identities, double-crosses and shocking violence.

It is apt in these times of self-isolation that Black Fawn Film’s latest project should focus on isolation in a tense and intriguing locked room story of The Oak Room. Directed by Cody Calahan, the film features a small but strong cast that showcases the fractured history between the characters while raising the tension between them. Though outside Black Fawn’s usual fare of the horror genre, The Oak Room is just as tense and compelling as their other outings.

One of the strongest aspects to The Oak Room is the small intimate setting it creates between the characters. It is essentially a ‘bottle movie’ that only switches locations a couple times into yet another small setting, allowing the tension to naturally rise with the characters as their conversations evolve. R.J. Mitte and Peter Outerbridge headline the film as Steve and Paul, a drifter who returns home after years away and a grouchy bartender respectively. Mitte and Outerbridge’s chemistry is captivating as they navigate through each other’s complicated feelings and history, going back and forth between camaraderie and hostility as they drudge up the past. Mitte conveys quite a lot through his body language in a few silent scenes, showing how much Steve’s actions weigh on him as he returns home.

The supporting cast are also strong in their own roles, particularly Ari Millen and Nicholas Campbell who make their relatively short appearances some of the most memorable scenes in the film. Millen is both energetic and mysterious with his role as another local bartender, playing with the aloofness of his character and the typical tropes audiences often see with onscreen bartenders. It is quite clear how much fun Millen is having while Campbell perfectly carries one of the film’s most pivotal scenes, both from emotional and thematic standpoints.

The Oak Room moves along at a nice pace. While the film is essentially a series of different conversations, it is never boring as the dialogue is engaging and different stories told tie together in different ways. The script is crisp, fast and tense with an exploration of quite a few themes. From the relationships of fathers and sons, the nature of stories or brewing storms, there is a lot to unpack and while that seems like a lot The Oak Room balances all of it pretty well. It never loses sight of its character driven focus as Calahan peels back the layers between the players.

The cinematography is another high point. The film’s visuals allow the story to flow very well with plenty of great looking shots and emphasis on the actors. It is very atmospheric in places, a fact helped by the film’s lighting and blocking. The intimacy of the cinematography just raises the tension even more, placing the viewer directly in the conversations. The Oak Room‘s score is also quite eerie, especially during sequences where it seems just one wrong word will set any of the characters off.

Between the strength of the small cast, the tightness of the script and build-up in the story Calahan directs quite a compelling and entertaining film. The Oak Room‘s patience in letting the story flow naturally and allowing the actors to do do their thing really pays off by the film’s conclusion. Mitte and Outerbridge give great performances that are enhanced by the exploration of the story’s themes and cinematography. Anyone who enjoys locked room stories with ambiguous characters will find The Oak Room is right up their alley.