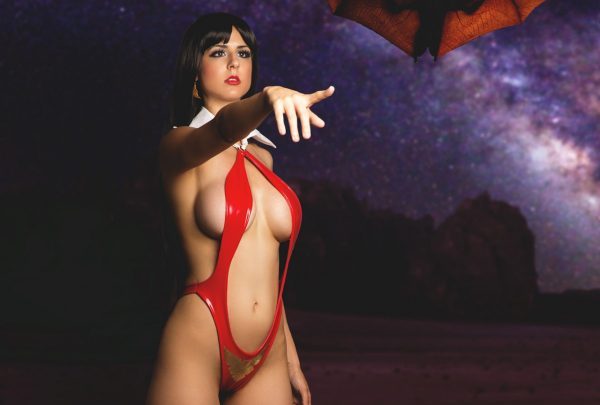 Dynamite Entertainment has announced that the Daughter of Drakulon is set to turn up the heat this month with the release of two graphic novel collections in Vengeance of Vampirella Vol. 1: Rebirth and Vampirella/Red Sonja Vol. 1: These Dark Synchronicities. Sporting an appropriately blood-soaked (not literally) cover by master painter Lucio Parrillo, VENGEANCE OF VAMPIRELLA VOL 1: REBIRTH is not to be missed. Though perfectly able to be jumped right into, the series picks up right where Vampirella: Death & Destruction #3 left off in 1996 – kind of…

Writer Tom Sniegoski (Punisher, The Goon) continues his fan-favorite run on the vampiress started 25 years prior, including the last ending with her death, and incorporating the lapsed time into the story. Across these first six issues, Vampirella is resurrected as a savior among the apocalypse brought on by Mistress Nyx and her Chaos Lords. Awoken from a decades-long slumber, she’s angrier and more vicious than ever before!

“Working on Vengeance of Vampirella has been challenging since I consider this my first big professional work,” said artist Sta. Maria. “Each issue is a blast thanks to Tom’s scripts and imagination, and I hope fans can feel the effort and excitement we put into the book!” VAMPIRELLA/RED SONJA VOL 1: THESE DARK SYNCHRONICITIES by the multiple Eisner Award-winning writer and colorist Jordie Bellaire (Buffy The Vampire Slayer, Redlands) and artist Drew Moss (Star Wars). This historic ongoing series co-starring the Daughter of Drakulon and the She-Devil With a Sword continues the legacy of team-up titles, even ones starring mysterious bat-themed characters and a noble heavy hitter!

Under the fierce cover by duo Terry and Rachel Dodson, the pair of protagonists find themselves on adventures spanning space and time, filled with horror, adventure, mystery and murder. All while their relationship builds and fans discover fun new aspects of their favorites. Did you know Red Sonja is obsessed with hamburgers? Or that Vampirella was there at the genesis of the punk rock scene? All that and more across these six issues.

“Working on this book has been a joy,” stated artist Drew Moss. “If you have any notions of what it’s about, you are probably wrong. It’s so much more. The stories are full of suspense, emotion and comedy that touches the depth of these characters and I feel adds to their storied narratives.”