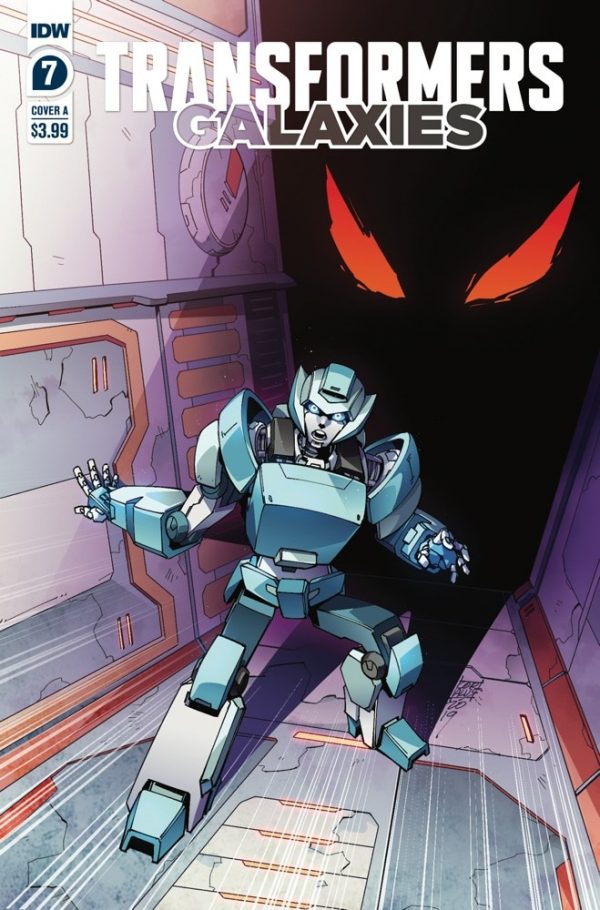 After months of delays due to circumstances outside of IDW’s control, Transformers Galaxies has finally returned with a new story arc focusing on Arcee, Greenlight and the newly created bot Gauge.  Newcomer writer to the Transformers franchise Sam Maggs writes a captivating issue that opens up one of Cybertron’s mysterious factions and raises plenty of questions regarding their intent. It marks a welcome return for the anthology series that is both entertaining and revealing.

The issue picks up sometime after Transformers #18, where Arcee and her friends made their way off Cybertron on the last departing ship as the situation on the planet began to truly spiral out of control. Immediately off the bat, however, things don’t seem quite right as Gauge, the most newly forged Cybertronian under Arcee’s care, has fully embraced Reversionist doctrine and seemingly has no memory of Arcee, Greenlight or the little of Cybertron she experienced. It sets up an intriguing story with a nice mystery, placing readers right in Gauge’s POV as she tires to make sense of her confusing thoughts and strange interactions with the Reversionists.

As for the Reversionists, the main Transformers series didn’t delve too much into their belief system or who they really were prior to their exodus. It seemed their religion was a fairly popular one given its rather small membership, yet also derided by several bots including Orion Pax and Megatron. The insight Maggs gives paints the Reversionists more as a cult than a proper religion with its leaders indoctrinating Gauge and possibly many more through some form of brainwashing. The tension slowly rises throughout the issue as Gauge questions more and more of her surroundings and has some hostile interactions with the leadership. The way Maggs opens up the Reversionists’ beliefs and how their system works is done quite well as she creates plenty of questions and tension.

For fans following the main series, it will be no surprise to see Beth McGuire-Smith’s artwork is as good as it is here. McGuire-Smith’s character work is well done as the script largely relies on Gauge’s inner monologue, making McGuire-Smith use a lot of body language, facial expressions and posturing to make each bot emote. She also excels at displaying quite a few large crowds and differentiates many of the bots’ appearances so each one seems unique to the other. Her work is quite detailed while Josh Burcham provides quite a few different atmospheric settings with his lights and darks. Due to Gauge’s questions, she is pretty much the only bot whose colours pop, separating her from many of her fellow Reversionists in another way. The art from McGuire-Smith and Burcham is great all around in the issue.

Sam Maggs makes her introduction in the Transformers universe an entertaining and memorable one. The mystery over Gauge’s memory and who the Reversionists really are is well played in its build-up as Maggs slowly peels back the layers of their religion. The art from McGuire-Smith and Burcham serves the story well and is impressive given so few of the characters speak actual lines. This next arc in Transformers Galaxies is shaping up to be a good one with Maggs at the helm.