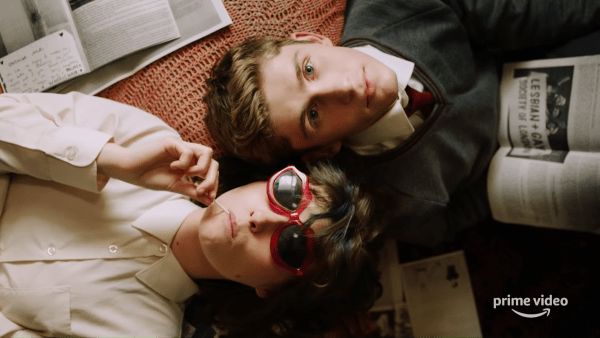 I enjoy a cinematic adventure. Occasionally I want to slip out of the comfort of a pre-ordained choice, or considered selection. I’ve made blindfold selections at second hand DVD stores (UK readers will know of these shrines as CEX) before and had mixed fortunes. It was only via this process I could possibly have found myself watching Earth Alien, a so bad it’s good sci-fi opus starring Eric Roberts. Despite the fact I think Roberts is great generally, he’s done so many films I’ve not heard of (at least a quarter of his CV) and unless I live to be 1002, could never possibly hope to watch all of them.

So I decided to have another play with fate and select two films at random. One via Prime and the other through Netflix. I carefully made sure I was in the movies sections. I only had one rule, said film had to be something I hadn’t previously seen. Should I have selected something I’d already watched, I’d flick through blindly again (the up/down, then left/right technique of blind perusal). 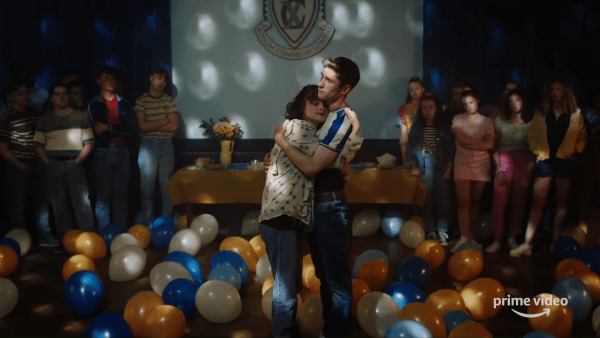 Fate was pretty kind to open proceedings, having scrolled down blind to the popular listings in Prime and then across to this. Slightly ironically it was an Amazon original, as if some deep seeded algorithm sensed what I was up to and guided my selection. I had of course heard of this prior. It’s current and trending and it had been somewhere on the kind of watchlist placing for me, that is neither pressing, nor likely to be completely bypassed. I was going to get round to it, without any fervent passion to do so.

Dating Amber sees the titular Amber, a closet lesbian high school senior, growing up in mid 90’s, highly conservative Ireland. Everyone at school calls her a Lesbian. It’s less a genuine knowledge of her sexuality, and more the fact she’s an outsider with a troubled past, and kids being mean. Then there’s Eddie, a young guy in her year who is struggling with his sexuality, or lack of attraction to girls. He’s confused and terrified by his feelings given the very outdated views of a strongly catholic town, and with his dad, an Army veteran who tries to instil virtues of manliness into his son (who is training to try and pass Army recruitment). Class mates tease Eddie over his lack of sexual experience with girls and he worries he’ll be ‘outed’ as gay. Amber and Eddie then join forces to begin publicly dating as boyfriend/girlfriend to give the impression that they’re ‘normal.’ Amber has her sights on moving to a more cosmopolitan London after school, away from a cold and uptight mother she believes could never accept her as Gay. 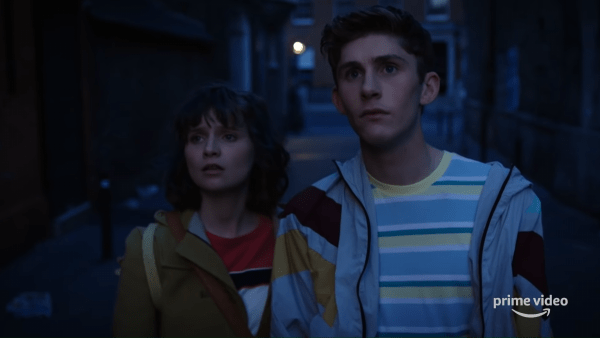 As a first pick in my game, I did very well. Dating Amber is a wonderful film. It’s beautifully bittersweet, uplifting and a fresh spin on the coming of age LGBT film. Set in a very distinct time and place with closed minds, (particularly among older more traditional folk within the community) it marks a kind of point in history where attitudes to homosexuality were going to begin thawing, and something Eddie and Amber see when they abscond from school on a skive day to the bright lights of Dublin and find a gay bar.

For me, British cinema does films like this wonderfully, as well as anyone in the world, but more so at the moment, Dating Amber also provides further proof that Ireland (North and South) is probably the leading light across British isles cinema. For the last decade they’ve been consistently making more engaging, vibrant and emotionally effecting indie cinema in all genres and this is another fine example (though I think I’d certainly like to see more ethnic diversity from Irish cinema certainly). 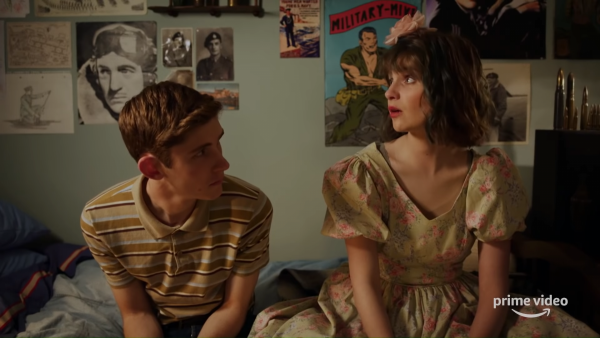 Beautifully written and directed by David Freyne, this perfectly hits those feel good notes, whilst being emotionally engaging and heartfelt. The two leads are skilfully etched and feel authentic. The performances from Lola Petticrew and Fionn O’Shea in particular are exceptional. O’Shea perfectly captures a state of pained confusion and persistent heartache at having to fear his true feelings. In addition Sharon Horgan and Barry Ward are great in support. The film is also blessed (I mean come on, it’s an Irish film, it has to be…) with an amazing soundtrack and score. This is definitely one to check out. It’s a fantastic film, and hopefully will have a cult following. 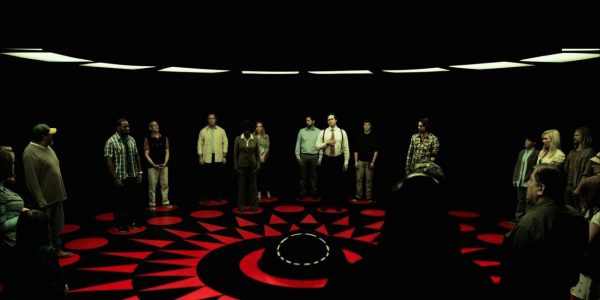 Not to be confused with that Tom Hanks Netflix film, this low budget sci-fi thriller, marked a definite shift in tone from my first choice. The concept sees a group of strangers wake in a room, all stood on their own spot, anyone who moves off, dies instantly. It soon becomes apparent to the ever decreasing numbers, that they’re all in charge of selecting the next person(s) to die, when the countdown begins every two minutes. Of course a few stand ahead to try and lead the situation (to varying degrees of success) as they all try to make sense of where they are and why. It’s left intentionally vague, though the consensus from within the circular room is that they’re part of an alien abduction, pawns in an experiment.

This obviously owes a lot to Cube. It doesn’t have quite the same flair and horror twist as Cube, whilst the deaths are all the same. There’s no emphasis on creating big death sequences as far as visual fx. The film takes a very minimalist approach and pretty much takes place entirely within the room. Whilst it may not be Cube, nor The Platform in terms of engagement, Circle is still a pretty decent slice of sci-fi. As the dwindling participants ponder on how to play the game and decide on who lives and dies, we of course get into a number of prescient topics such as religion, class, ethnicity and sexuality become part of the conversation, before they get down to a nitty gritty of voting, split down into two opposing groups.

One thing I have to give credit to writer/directors Aaron Haan and Mario Miscione, is the pacing of the film. They manage to keep things moving and the inner group political developments interesting, and never let the attention wane too much. It’s a difficult thing to do in minimalist one location films. A lot is based on dialogue. The characters debate in two minute bursts, and thus we never get a great idea of each individual, but in some senses that makes sense to not have a particular protagonist. I will say though, some of the group ‘assholes’ lasted longer than I thought they might, but hey, maybe that’s a suggestion that forthright gobshites step over people to high positions in societal hierarchy.

Sensibly the film sticks to 90 minute, because many films of similar ilk have had ideas that suited short form, stretched too thin and lose interest quickly. It’s a well made film without being overly memorable. The cast are decent, but again, no one particularly stands out as we’re not given that protagonist to root for, beyond this increasing notion that a pregnant woman and young girl should be saved until the end (even if there will be an inevitable choice to be made). For the efficiency with which it’s made it’ll certainly maintain interest, but it lacks probably the enigma and visual impact to give it cult status, something Cube has in abundance.

Will you let fate decide your next movie pick? If so, let us know what you ended up with (for better or worse). Let us know in the comments below or on our social channels @flickeringmyth…