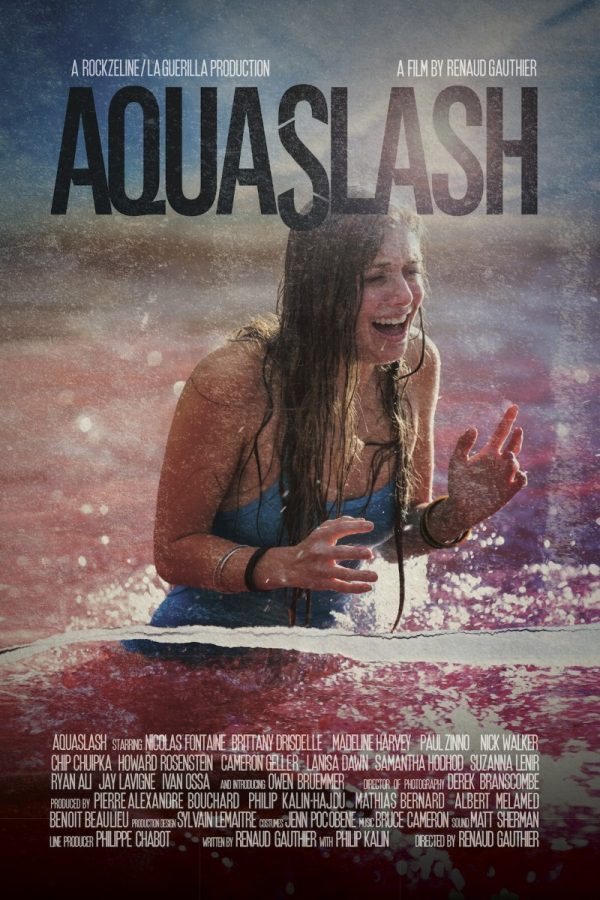 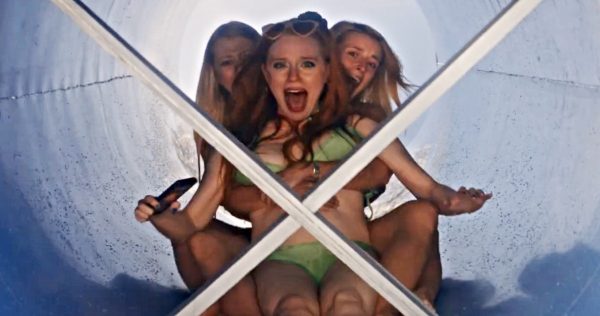 Renaud Gauthier’s faux-American Aquaslash sullies the “water park horror” subgenre worse than Piranha 3DD. Somehow the concept of novelty-sized razor blades stuck into attraction slip-n-slides is tedious, incompetently plotted, and hopelessly dull. Even at barely seventy minutes, Gauthier’s screenplay is more generic than any movie-within-a-movie about hazardous hormones. Aquaslash requires steadfast patience on the part of horror fans, given how entertainment hinges on one climactic sight gag that’s unleashed as the film’s crescendo and outro. It’s not a continual slasher, no constant action, just drunk graduates fornicating in an aquatic playland before a few limbs wash into a shallow pool.

It’s another summer at Wet Valley water park, where Valley Hills seniors are permitted entry to celebrate their completed education. Partiers unpack their swim trunks, beer bongs, and condoms before taking over the grounds under owner Paul Wilkinson’s (Nick Walker) supervision. It’s not long before intoxicated patrons enter ambulances with broken bottle wounds, not to stop Alice (Madelline Harvey) from keeping the good times rolling only for love triangles to dampen moods further. Kim (Lanisa Dawn) cheats on Tommy (Paul Zinno) with Josh (Nicolas Fontaine), but it’s okay because they’re really in love, while Priscila (Brittany Drisdelle) and Paul have their flings exposed. Oh, and it’s also the 35th anniversary of a previous park “murder” – but no one seems to be mentioning that ominous detail? 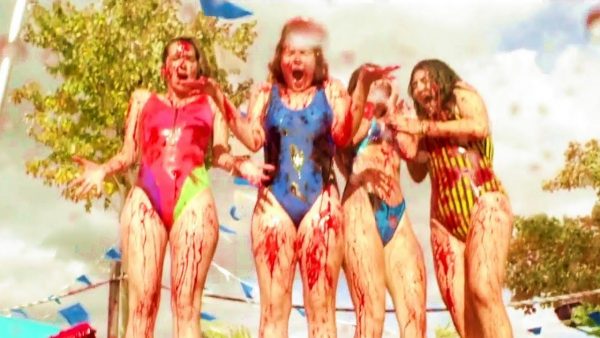 Reader, I’m bodaciously bummed-out right now. Aquaslash sounds so obscurely ambitious in its desire to satirize slasher gimmicks. The result is far less enthusiastic and far more draining than any “water slide slasher” should ever be, double-frustrating since Gauthier can define precisely how this “subgenre” should appear. There’s so much potential for wet-and-wild exploitation, yet a majority of screentime indulges the most convoluted, tonally miscalculated soap opera drama. It’s hard to categorize what catastrophe does happen as a “horror-comedy” since the comedy harnesses less energy than an American Pie direct-to-video spinoff, and terror isn’t present.

Gauthier struggles to mock horror cinema without making a mockery of his narrative. It’s total nonsense. There’s a genuine attempt to skewer tropes, maybe “crazy” Tommy screaming “YOU’RE GONNA DIE” at laughing patrons, but Gauthier never emphasizes beyond surface-value imitation. We get “Killer POV” twice as to not reveal the park slaughterer’s true identity (very Friday The 13th), the years-prior incident (that’s never explained), a “creepy” past employee who speaks in prophetic circles – it’s all generic, intentionally, but also to a detriment. In trying to comically prod the very beats horror fans would laugh at in other “lesser” films, Gauthier ends up relying on those structural insufficiencies he intends to roast. Joke’s on Aquaslash, disappointingly. 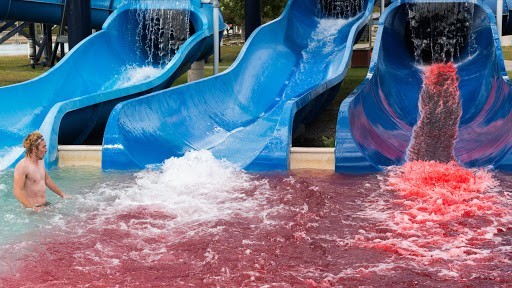 Actors often can’t decide if they’re starring in super-softcore porn or some General Hospital “but kookier” ripoff. Line readings hang like performers just opened their scripts, still uncertain, uttering such zingers as, “Been saving this baby for you, baby” (says Bro #17 who pulls a rubber from his pocket). Dialogue is rough, deliveries are harsher, and the whole production carries this exasperating deadness that’s a chore to choke down (drink every time “baby” is spoken). It’d be one thing if action intercuts these lackluster swipes to neon-paint wave pool raves or bumps of cocaine or the resident bully’s hatred of music (seriously, that’s his explanation for meanness at one point). Alas, Aquaslash makes you wait an eternity for any payoff. Except if you’re counting how many incorrect names starting with “C” other characters call Chad (Cameron Geller). Comedy gold, I tells ya!

With one gushing visual gag that dismembers a torso or two, Aquaslash is over. All this hype about an insane concept, catchy title, and promised water park paranoia that fizzles with nothing more than a blast of redness tainting chlorinated waters. No diving head-first into what should be a carnage-drenched marriage of theme park horrors and exaggerated midnighter appeal. Renaud Gauthier’s commitment to genre depravity in Discopath does not duplicate in Aquaslash, an inoffensively non-commital mess of humorless high school immaturity and all-too-brief bloodletting. Cap that off with a mid-credits stinger which, one last time, highlights the scant amount of thought put into anything past the titular “aqua slash,” and you’ve got yourself the year’s most disappointing conceptual horror letdown.