Tom Jolliffe takes a look back at a classic neo-noir, The American Friend which saw four legends of cinema combine to create the greatest Tom Ripley adaptation… 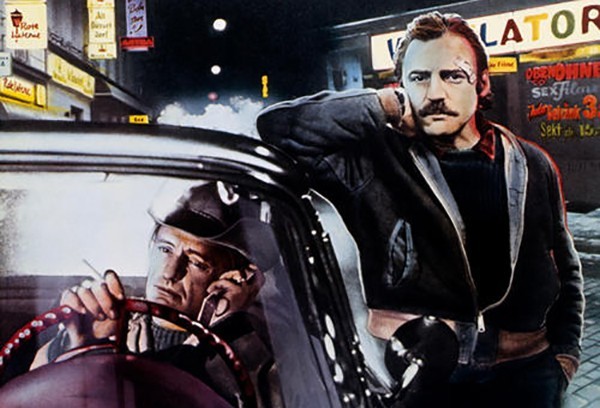 Lovers of cinemas literary adaptations may be familiar with the Tom Ripley series. Patricia Highsmith’s crime novels on the titular Ripley proved immensely popular and inevitably lead to Hollywood adaptations. Most famously we’ve seen the novels brought to life in The Talented Mr Ripley (starring Matt Damon and Jude Law) back in 1999 as well as Ripley’s Game in 2002 (starring John Malkovich). The morally obtuse Ripley, a convincing con man was made for the cinematic treatment. The Talented Mr Ripley was a box office smash and a critical success for Anthony Minghella. It was nominated for four Oscars. Ripley’s Game (adapted from the book of the same name) was less successful. There were another couple of less prominent adaptations too, Purple Noon (a loose adaptation of The Talented Mr Ripley, and the first cinematic outing for Ripley) as well as Ripley Under Ground (the most recent and most forgettable). 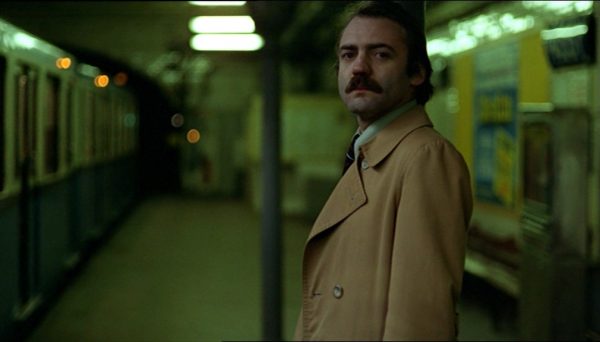 There was also The American Friend in 1977. This German/French production, which marked the first English language film (though partially throughout, mixed with German) of director, Wim Wenders, was a loose adaptation of Ripley’s Game. The first three cinematic outings for Ripley remain the best by a long way. However something about Wenders’ film feels just that bit more special than the others. Wenders had established himself as a major voice in world cinema and a director out of Germany with a distinct fascination with American culture that permeated many of his earlier works (including the American atypical road movie, Kings of the Road and The Goalies Anxiety at the Penalty Kick which saw a listless and unstable goalkeeper, with an appreciation of American culture, on a bizarre and murderous road trip odyssey). This distinct melding of German sensibility in a creative post war boom, mixed well with the interest in Americana, and ultimately paved the way for something as unique and beautiful as Paris, Texas.

Along with his cohort, (cinematographer) Robby Muller, Wenders would use this sensibility to create this oddly poetic and languid neo-noir thriller. The combination of Wenders directorial flair to create something elemental from the everyday, and Muller’s ability to bring an ethereal quality to the natural world contributed to some of cinemas most exquisite looking films. Interestingly, as a pairing, their visual splendour worked equally well whether shooting in black and white, or colour. Muller actually seemed to prefer shooting in black and white, but his gift for evocatively capturing colour that seemed fantastical (but natural) meant he could create true beauty whether there was colour or not (and indeed, particularly when he was afforded the freedom to shoot his way). There were in fact examples during The American Friend when Muller was outraged that some of his footage had been ‘colour corrected’ by the lab technicians. 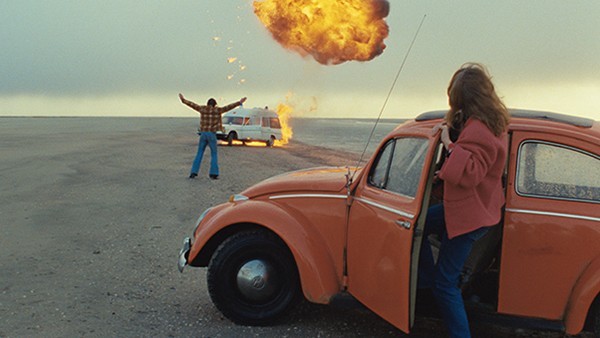 With masterful craft, Wenders and Muller set about creating a visually arresting neo-noir set against a European backdrop, not least in the dank surroundings of mid-70’s West Germany (set and filmed in Hamburg). A very realist look, permeated with Muller’s gift for elaborately authentic colour. The next key element of the film would be in casting. Here, Wenders brought in two exceptional actors to bring Tom Ripley, and reluctant killer Jonathan Zimmerman, to life. Dennis Hopper and Bruno Ganz.

Hopper had come from filming Apocalypse Now. He was in his peak at the time, an actor known for his edge, unpredictability and a penchant for jumping away from the page. When Hopper was let loose and inspired (with enough reign to stop him going over the edge) he was electrifying. Here, he delivers one of the most (if not the most) interesting portrayals of Ripley. There’s something unconventional and philosophical about his unbalanced depiction of Ripley (who in other incarnations has been portrayed as more calculated). Hopper was prone to improvisation which created odd but characterful moments within the film. There’s a moment, so unmistakably Hopper where he’s on an overpass. He hops up on a ledge and starts walking along it (with the underpass 50 feet below). It’s perilous to say the least, and I’d wager probably quite spur of the moment. A slip to the left and he’s basically dead, but that was Hopper and it was for no reasoning other than an impulse of character. 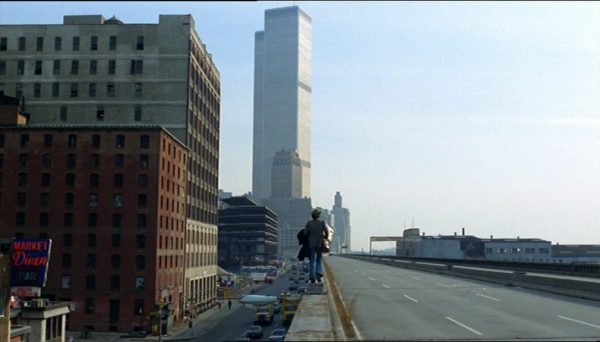 Ripley as a character here is fascinating. He sets about a chain of events that sees Jonathan (Ganz) targeted by a criminal organisation to perform an assassination. Jonathan believes he’s at deaths door, and is promised enough money to see his family in good stead beyond his death. Ripley develops a sense of guilt at getting him involved, particularly when Jonathan is tasked with performing a second hit. There’s a sense that Ripley’s duplicitous life to this point has taken a psychological and emotional toll which Hopper manages to portray with enigma, charisma and poetry. Something about Wenders’ sensibility and Muller’s photography lends itself beautifully to introspection. Something, which as an actor, Hopper is able to do.

Before he became infamous across the internet for Hitler reacts (as people re-subtitled a famous scene from the film Downfall where he played Hitler), Bruno Ganz was a well travelled and highly respected performer. The Swiss actor, most prolific in German language cinema had been busy for over decade but yet to make a breakout as a leading man prior to The American Friend. Wenders gave him that platform and would end up becoming intrinsically tied to Ganz later on in Wings of Desire (arguably Wenders’ most well travelled film bar Paris, Texas). Ganz is pretty magnetic here. He’s a character who isn’t prone to lengthy periods of dialogue either, so much of the brilliance of his role is what goes on beneath the surface. 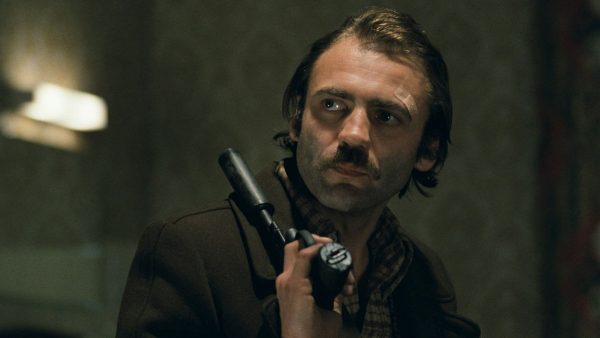 As Jonathan deals with an unclear prognosis, and then the task thrust upon him (after the criminals fake a clear and grim prognosis), Ganz has a lot of complex emotions to convey. It’s not a simple black and white collection of feelings. The idea of killing is alien to him, something he’s initially set against. He’s never forced into it. It’s never a case of being threatened or having his family threatened. He’s essentially lured and manipulated, but Ganz portrays this moral dilemma brilliantly. The act itself too, as he must shoot his first victim in Paris on a train, is quick and instinctive (after initially missing his first moment and having to track the target, eventually gunning him down on an escalator). Up until pulling the trigger he doesn’t know if he’ll do it, and nor do we. The brilliance in Ganz’s portrayal and Wenders direction (and script) is that whilst the act sickens him, it also excites him. It’s exhilarating. The more Ganz descends into the criminal acts (and follow up tasks) the more he becomes stricken with anxiety and fear until a great final moment. Nothing is played as conventional or expected in this film, it’s played as complex and interesting, and that’s what marks it out from the slightly more conventional thrills of the other adaptations.

Wenders’ film opts for a considered pace and a build up of slow tension (with a provocative score of impending dread). Brief moments where the film ups the pace in frantic scenes (including Jonathan’s first hit) are exhilarating but it’s the reflective moments and dialogue scenes which are most engaging. Highsmith purists will perhaps prefer a closer adaptation to the source, but for cinephiles and cult film enthusiasts, The American Friend just has a sensibility that makes it as one of the most special neo-noirs of the era (and beyond). There’s a unique style all of its own. The film owes so much of its power to Wenders, Muller, Hopper and Ganz, four absolute legends in their respective fields. 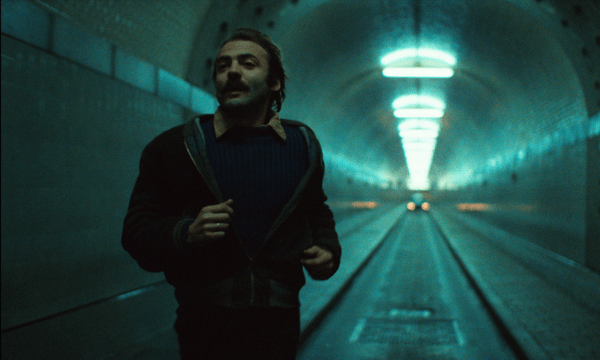 Have you seen The American Friend? What are your thoughts on the film? Let us know on our social channels @FlickeringMyth…