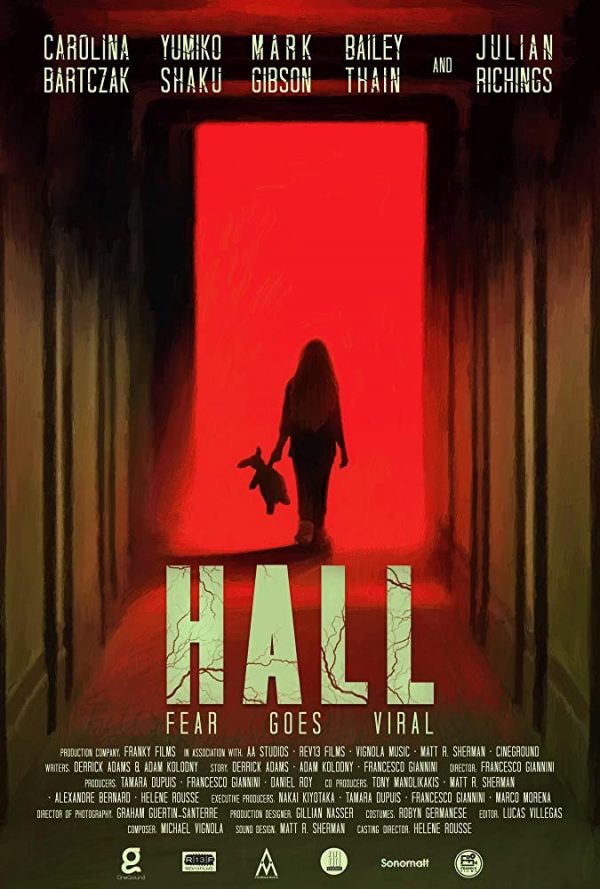 When a debilitating sickness spreads across a long hotel hallway, a few scattered victims fight for survival, and try to escape from the dark narrow stretch of isolated carnage. 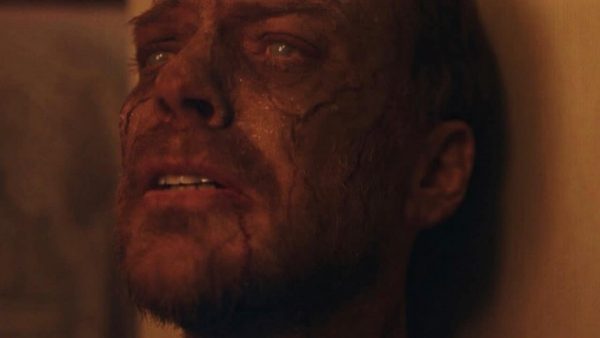 There are two kinds of horror fans right now; those so sick of hearing about The Pandemic that a virus film is the last thing they want to watch, and those who can’t get enough of the damn things.

Yet neither camp is sure to find much worthwhile in Hall, as though Francesco Giannini’s feature debut oozes gloomy style and touts a skilled ensemble, it’s fatally hobbled by an elliptical storytelling approach and tension-devoid execution.

The film begins in media res as pregnant Japanese woman Naomi (Yumiko Shaku) gasps desperately for breath in a hotel hallway, her body and mind debilitated by an airborne virus. As Naomi desperately attempts to crawl her way out of the hotel, fellow patron Val (Carolina Bartczak) plots her own exit with her daughter Kelly (Bailey Thain), fleeing not only the infection but also her abusive husband, Branden (Mark Gibson).

For its opening portion, Hall is at least a film full of promise; the early sight of Naomi caught in the throes of the virus, her feet pulsing and twitching unsettlingly as she drags herself along the hall, suggests a project keen to focus on the agonising physical minutiae of a person exerting themselves to freedom.

But Giannini’s excessively episodic narrative structure quickly robs the film of much suspense, cross-cutting not only between the outbreak and the hours preceding it, but also indiscriminately between Naomi and Val. Rather than allow us to stick with either of these characters for the full ride, we’re shuttle-cocked between them constantly in a manner that undermines any attempt to build a head of narrative steam.

And though it’s clear that Giannini wants to craft a searing tale about women surviving in spite of their male aggressors – both Naomi and Val are in the midst of toxic relationships – this is rendered moot by the film’s more base failings as a mere piece of straight-up genre entertainment.

It isn’t until the mid-way point that the story gains forward-motion, with some fitful suspense actually ensuing; a scene focused on one character’s death, filled with terrified suffering as it is, is efficiently effective by holding tight on the character’s face as the life drains out of it.

But the “artsy” restraint of the first half eventually ambles into clumsiness with the arrival of the mysterious Julian (Julian Richings), a vial-totting spook seemingly responsible for the viral release, whose cartoonish “world-saving” motives feel a touch too Scooby Doo compared to everything else up to this point. Moreover, did we really even need an origin story for the virus at all?

Though a shockingly violent surprise abounds as act two winds up, it’s largely a casual trundle to the simplistic, abrupt climax thereafter, leading to a thoroughly silly sequel tease which again feels totally counter to the quieter, slow-burning tone of that first half. As a payoff to everything that came before, it’s a lousy ending, and one made worse by an outrageously talky five-minute post-credits scene, a news report debrief which hardly tells audiences much they don’t already know.

It’s a shame that Hall can’t keep climbing uphill after its compelling enough first act, because the cast is clearly game for the workout; Yumiko Shaku does a fantastic job making her desperate crawl through a hallway look as physically painful as possible, while Carolina Bartczak’s soulful work makes Val sympathetic and relatable. Richings meanwhile chews through the hammy dialogue in his single scene, though is clearly just here to lend his name to an unassuming project.

Just as much of a waste as the cast is the film’s impeccable visual style. DP Graham Guertin Santerre’s low-light visuals and formal restraint evoke the coolly detached aesthetic of a David Fincher film, while Michael Vignola’s musical score apes Ennio Morricone’s dread-soaked synth work from The Thing – though like Santerre’s pin-sharp visuals, sadly isn’t backed up by the material as written. 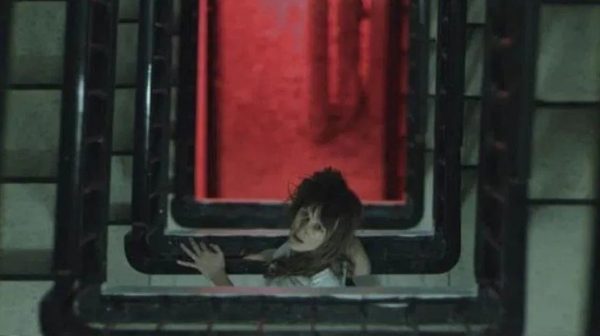 Despite an 80-something-minute runtime, Hall feels shockingly padded, as though a short film hopelessly attenuated to feature length. Its earlier attempts to pose as restrained and quiet clash with a second-half which over-indulges in genre cliches and tonally ill-suited choices, ensuring that it just doesn’t quite work in the end.

Though high on style and atmosphere, Hall fails to populate its appealing setup with the required suspense.