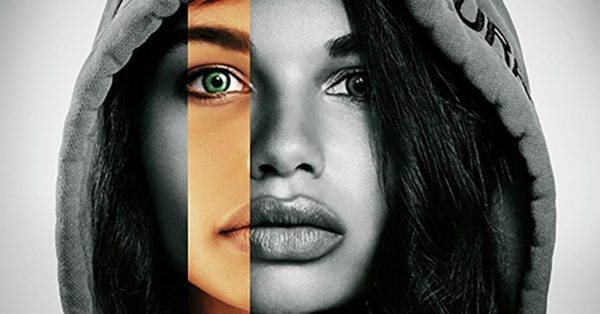 Charlie McDonnell lived his life online as a teenager becoming the first UK YouTuber to break a million followers in 2011 and then two million in 2013. Jeffrey Lieber is a revered screenwriter and co-creator of the contemporary classic known only as Lost. This collaboration spawned Don’t Look Deeper a teen drama driven by contemporary issues of identity. Charlie and Jeffrey recently took time out to talk to Martin Carr about their involvement and what drew them to this project in particular.

From a creative perspective what made this the project to collaborate on for you both?

CD – My background is as a video blogger is where it started for me, because I was experiencing an identity crisis with my persona on line versus who I was in reality; having been on YouTube since I was a teenager. I really wanted to explore a story which centred on someone going through an identity crisis, so that was the genesis for me. Then when Jeff came on board he came in with the perspective of a parent I think.

JL – It’s interesting because we sort of exist on both sides of the divide. Charlie walked in with this premise of what would it be like to realise you had lived your entire life with people staring at you, but your genesis story might not be the one you wanted. I came in with the idea of how do you raise someone who is trying to individuate from you, when you have handed them the programming, the DNA and machine language so to speak. I get pitched all sorts of projects to come onto and it is very rare to have someone who is instantly collaborative and flexible which Charlie was from the outset. You could always pitch him something and you would get an honest answer, but he was also open to letting this idea move around which is necessary within any partnership. 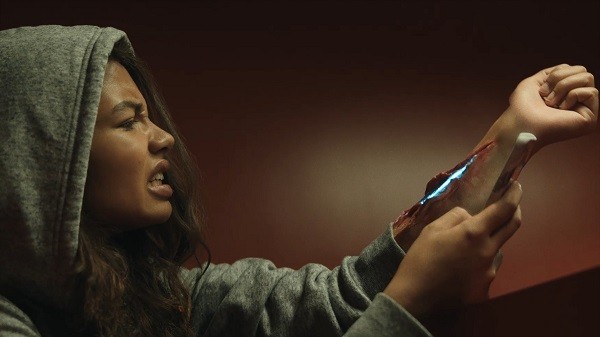 There is a polish and sophistication to the story telling in Don’t Look Deeper, how did you both go about writing for Quibi?

CD – The way we came into it, or at least the way I felt about it was very much how you would write television, which leant into Jeffrey’s expertise in terms of the different aspects of that process. We were always thinking about these things as ten minute episodes, so we wanted to push the equivalent of these television ad breaks a little further each time to get people coming back. Essentially approaching it like that but with a smaller team of writers.

JL – It was one of these wonderful opportunities where the format was very familiar to me.  A ten minute act with eight to nine minutes of pages which is something I do in long form television anyway. However because this wasn’t a traditional network in any sense, we were able to do these short films opening the door to incorporating flashback in some episodes and changing perspective at other times. Which in turn allowed us to change point of view within an episode from Aisha (Helena Howard) to Martin her father (Don Cheadle) because we were given the freedom to do so. Making this content not only primal in its ability to push forward narratively, but also poetic and somewhat free form on occasion in approach.

How important was it for you to get this particular cast and crew on the project?

JL – There were two different iterations of this project and Helena is the one piece which moves between them. We cast her then it fell apart and we found Quibi before she came back. I will say that when Catherine came aboard it seemed like the perfect fit, because her film Thirteen is a very seminal movie in the cannon of telling stories about young women. It was one of the first which really told the point of view of a troubled teenage girl with compassion and empathy. She was ideal because in our story we have a complicated young woman at the centre of this story and we didn’t want to sugar coat her. Nor did we ever want to feel that she wasn’t being treated with the empathy and understanding that Catherine brings to the project.

CD – I will also say that Jeff mentioned the previous iteration of the project and our budget on that was a tenth of what we ended up having for this Quibi show. So in terms of having Don Cheadle, Emily Mortimer and Catherine Hardwicke it was sort of beyond our greatest expectations from how I originally conceived this project. It took me a few watches of the show to get over the fact that Don Cheadle was in my show. 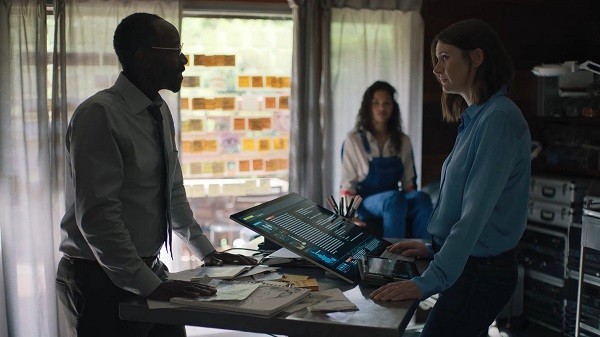 Don’t Look Deeper hinges quite heavily on a series of thematic choices which include morality quandaries, rites of passage plot points and out underlying reliance on technology. How do you both think they lent depth to the story?

JL – For me it always came back to what does it take to raise a child who wants to individuate themselves from you? For me that central idea incorporates all those others you mention. From Martin and Sharon’s (Emily Mortimer) point of view it’s how do you raise a child and what point to you let them be who they are? From Aisha’s point of view it’s how do I get to be my own ‘person’ and for other people it centres on what responsibilities lay around bringing ‘this’ child into the world. Those things always came to mind in my head and trying to live as much as possible on the razor’s edge without vilifying anybody, which made this as engaging as possible.

CD – I think in terms of tech aspects we were always looking for ways of supporting those questions around humanity. I hope there is some cool stuff in the show, but we were never trying to make a point about technology itself, but more how we can use these ideas to support Aisha’s point of view.

JL – Once you get to a piece of AI that has no idea it is a piece of AI from a moral standpoint, how is it any different from a child. That was the thing which was so interesting to me from where Charlie even started, because when he first pitched it there was a scene which will hopefully be in some version of the show. This AI is standing on stage and being interrogated by a group of people to show how cool it was, but Charlie said that during this scene the AI just begins to realise that they are different in some way. Which for me was the key to this whole thing, where once you have technology which doesn’t think of itself that way how is that any different from you and me. 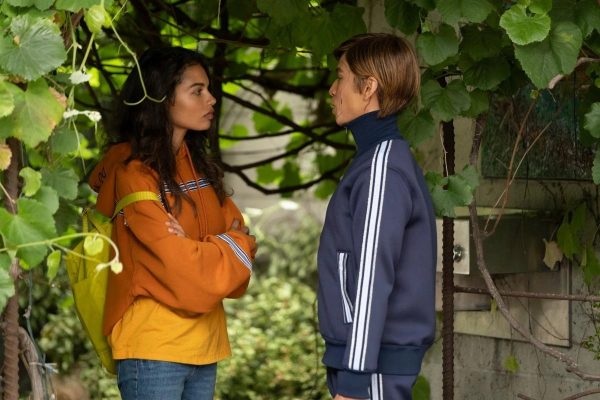 To what extent do you both think technology defines your personal identity today?

CD – I have thought about this a lot as I obviously grew up posting videos of myself on line, figuring out who I was in front of this audience and found a lot of value in creating things which didn’t have my face on. We rely on these juries around ourselves to explain the story of who we are, which I find increasingly odd as I get older, leading to me being more selective about how I want to show myself on line. You don’t need to be a YouTuber to identify with those ideas I think.

JL – It has been funny to watch people’s reactions to Charlie’s involvement in this, because almost universally the comments have been ones of surprise as he is not known for being this dark. So one of the things I found so entertaining about watching Charlie be part of this was watching him get comfortable with exploring other parts of himself, which were not part of this accidentally packaged version people were familiar with on line.

CD – It didn’t have to coincide with the PG brand which I had maybe unintentionally created and it was very freeing definitely. 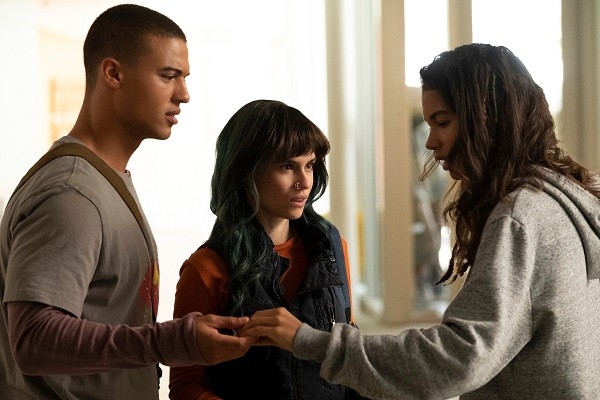 If you had to give up your freedom of speech or your digital footprint which would it be?

CD – I think as the perception of who someone is gets decided more by how they are seen on line I feel drawn to doing these types of project, in order to maintain as much control over that as possible. However, I have spent a lot more time being preoccupied by that idea which is maybe why I would lean more towards keeping control of my digital footprint.

JL – I would absolutely hold on to my digital footprint but let me just shift to something else. Recently there was a letter written by a lot of very popular writers who seemed aghast that their words might cause a negative reaction from people. They felt that they had a right to the adoration of the public and I think it is really important that when we say things, we have the right to say them but not the right to any adoration for our work. So I found that American first amendment right to freedom of speech to have been weirdly twisted. We should have the right to say what we want and the ability to speak our minds, but we also have to understand that when you upset people they have a right to reject those thoughts.

CD – It typically involves sunshine, a BBQ with friends and a beer hanging out on the porch then maybe some board games.

JL – I not sure I can answer that question unless it was being in a space where people are no less than six feet away. We are all living in this era of technology which is great but I would love to come back to humanity.

Thank you for taking the time to speak to Flickering Myth today and take care.