Once told they’d save the universe during a time-traveling adventure, 2 would-be rockers from San Dimas, California find themselves as middle-aged dads still trying to crank out a hit song and fulfill their destiny. 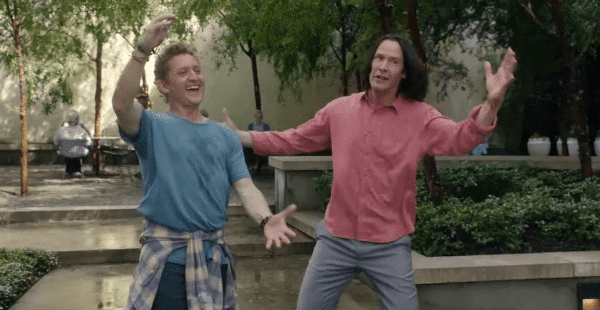 Aside from opening with a much-appreciated joke that resembles Spaceballs‘ riff on Darth Vader being Luke Skywalker’s father, Bill & Ted Face the Music reintroduces us to the Wyld Stallyns, now middle-aged, unpopular, and worst of all, having failed to create a song that unites the universe. They can’t even captivate a wedding audience.

Burnouts and professional failures, Bill (Alex Winter, who easily slips back into the role and looks the part) and Ted (Keanu Reeves, here with a questionable look but a passable enough reprisal of his first major role) have done right by raising their daughters alongside their former 15th-century princess wives (now played by Erinn Hayes and Jayma Mayes.) Now young adults themselves, the girls are musically inclined and take after their fathers, both the good and bad. They are rather sweet and attempt to mimic the same dynamic as the fathers they greatly look up to but appear to be on a fast track of taking after them a little too much. Basically, the princesses are the only one holding a job and keeping things together, but even they might be ready to dip following a hilarious couples therapy session (headed up by a wonderfully bewildered Jillian Bell who winds up hearing about time travel) filled with hilariously dimwitted dialogue that bluntly gets across the point; Bill and Ted don’t know how to be a loving couple to their princesses without constantly acknowledging one another. 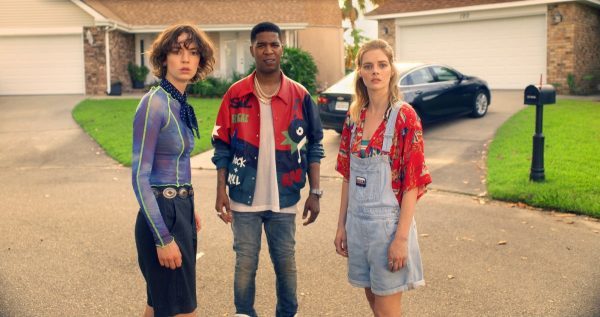 Par for the course (while this installment is directed by Dean Parisot, it is still written by Chris Matheson and Ed Solomon who created the characters and penned the scripts for the original two films), time travelers come from the future and give the rock ‘n roll airheads a goal. This time, Kristen Schaal’s Kelly (a character playing the daughter of George Carlin’s Rufus from the past movies) warns that the space-time continuum is going to fold over on itself if the song to unite the world is not written by 7:15 PM (don’t question the logic), which is in about 78 minutes (surprisingly, it’s not just 78 minutes in movie time, as the filmmakers do somewhat stay consistent to how much time is left allowing things to play out in real-time as much as possible in turn allowing for a sense of urgency.) More terrifying, time travelers have also shown their princesses that there is no timeline where they remain happy with Bill and Ted, adding a personal element to fight for on their quest.

As historical figures are being warped all across time, Bill and Ted explain to their daughters what must be done to save the day, once again using phone booths to travel through time, this time interacting with their future selves at various intervals hoping to steal the song instead of actually writing it themselves in the current day. They are slackers, after all. Meanwhile, Billie and Thea (Brigette Lundy-Paine and Samara Weaving respectively) sort of misinterpret what must be done and decide to go back in time, rounding up the most popular musicians of all time (iconic figures ranging from Jimi Hendrix to Mozart) to further help save the world. 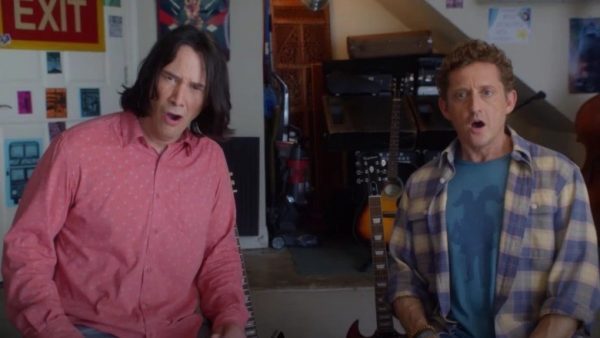 This is where Bill & Ted Face the Music breaks off into two different bogus adventures when it probably would have benefited the overall story structure and daughter characters to have them stick around their fathers. Certain scenes by themselves are fine and funny, namely Bill and Ted finding themselves more and more washed up the farther they progress into the future (the prosthetics and makeup effects definitely deserve recognition here), but it drags on for too long, getting to the point where they are talking to elderly versions of themselves in a retirement home. In this particular sequence, the humor is cringe.

The film also fails Billie and Thea by separating them from Bill and Ted. Samara Weaving and Brigette Lundy-Paine are capable actors (Samara Weaving is the more expressive of the two although both are entertaining to watch) decorated in their own unique wardrobe design, but the writing never gives them as good material to work with or sequences that amount to anything more beyond recruiting legendary historical talent. Even when enlisting the assistance of modern star Kid Cudi, the camaraderie between the girls never really becomes infectious, and it’s hard to not feel like having Bill and Ted there would have solved some of that problem. Hiring a female writer to scribble lines for two young women also would have helped. 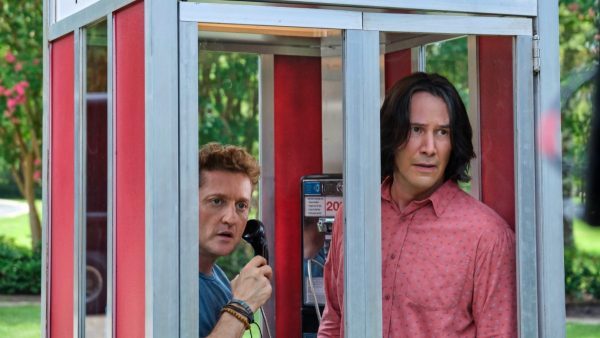 The bigger issue here is that, like most decades-later comedy sequels, Bill & Ted Face the Music is more concerned with playing the greatest hits for nostalgia’s sake. Most of the aspects already touched upon in this review are lifted from the previous movies, whether it’s something as simple as evil time travel or bringing historical figures to the present day. There is little new here beyond past and present versions of Bill and Ted repeatedly trying to outsmart one another, which is sometimes funny and other times not. Again, for a 90-minute film, it still drags, and by the time William Sadler made his return as Death (because what would a greatest hits package be without a detour to hell) I was admittedly starting to get bored.

It’s also no surprise where the plot of Bill & Ted Face the Music is going, but it does thankfully hit some high notes during a feel-good ending that is probably more effectively wholesome and rousing than it has any right to be. It begins strong and strong, but the entire middle stretch feels as if the filmmakers were conflicted about what they actually wanted to do; make another movie about Bill and Ted or one following their daughters. The editing is jarring with the storyline as a whole all over the place until the most groovy finale. 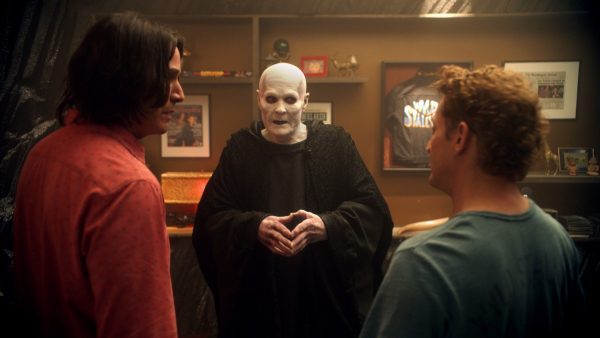 Bill & Ted Face the Music is also nowhere near the worst of these comedy sequels; it actually might be one of the best. So with that said, it will be interesting to see if the series goes forward placing Bill and Ted in the backseat. Whatever capacity they do remain, Keanu Reeves and Alex Winter still rock in these roles, and rocky comeback aside, there’s still excitement over how Samara Weaving and Brigette Lundy-Paine will carry on the music.