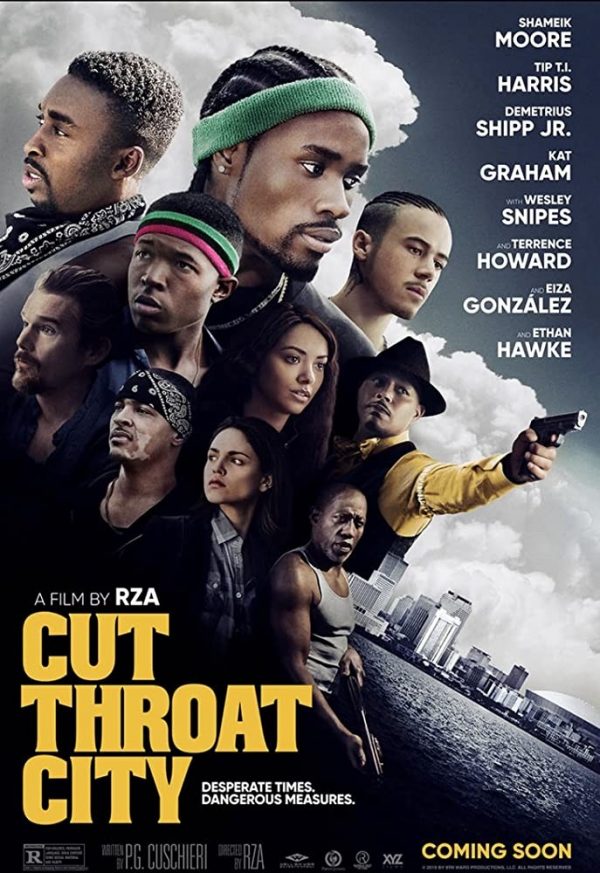 Set after Hurricane Katrina, four boyhood friends out of options reluctantly accept an offer to pull off a dangerous heist in the heart of New Orleans. As Cut Throat City begins, the four childhood friends at the center of the crime flick begin discussing over-the-top violence and the importance of ensuring entertainment has artistic merit, specifically with Quentin Tarantino’s name brought up. It’s noteworthy for multiple reasons; director RZA (the Wu-Tang Clan rapper turned decent filmmaker) has previously worked with Tarantino before and is most definitely a passionate cinephile himself, which makes it slightly surprising that one of the characters basically takes aim at the legendary auteur for his usage of senseless carnage and overuse of a certain obvious racial epithet.

In the grand scheme of Cut Throat City, the scene is actually entirely pointless and just meant to demonstrate the camaraderie between the actors and characters (which is actually great and one of the more positive aspects of the film); it’s just four friends having a conversation before one of them gets married. However, it’s a conversation that keeps ringing throughout the rest of the film, as RZA’s own ambitions and clear inspiration by Tarantino get in the way of his talent as a filmmaker, which is not quite there to be making something that is at best, an entertaining crime thriller and at worst, a disjointed Tarantino knockoff. It’s also important to point out that while RZA injects as much of a cinematic flair and quirky touches as he can (there’s an animated opening depicting a graphic novel as one of the protagonists is an aspiring comic book artist, not to mention some menacing crime lords launching into philosophical speeches during confrontations, and blatant visual homages to Tarantino films such as Jackie Brown), the script from P.G. Cuschieri is also a major problem perhaps with too many characters, crime factions, and law enforcement types on both sides of the moral spectrum to ever really fully invest in anyone or the greater message at play in regards to social inequality and systemic racism, especially following Hurricane Katrina in Lower Ninth Ward New Orleans. At times, it almost feels like the movie is abandoning its premise in order to go for the usual tropes of corruption and betrayal and action-oriented mayhem.

Fortunately, Cut Throat City is populated with some highly watchable actors ranging from up-and-coming stars to reliable veterans. The most praiseworthy of the bunch is Shameik Moore’s Blink, the aforementioned artist trying to get his work off the ground. He has a deflating meeting early on about his work that basically boils down to rejection based on his race, so as much as the film tries to make his art a part of his character, it’s all the more surprising when those things too are abandoned in favor of robbing casinos (establishments that have long been stealing from them) and building up a criminal reputation. At least the film is consistent and doesn’t spend much of any time giving these heists preparation, but it’s also jarring watching them become largely efficient thieves on a whim. Wesley Snipes plays Blink’s estranged Bayou fisherman father who inevitably reluctantly provides sanctuary for the crew, Eiza Gonzalez is a detective committed to unearthing the truth with honesty, Ethan Hawke is an alcoholic crooked politician coming to terms with his own wrongdoings, and T.I and Terrence Howard play a pair of unhinged crime lords on different levels of the totem pole. The performances themselves are all good, and the supporting cast actually feels more fleshed out in terms of characterization than the four friends (who are disappointingly just your average gangsters looking to escape poverty.) Yes, that’s the point, but even average people should be given some characteristics to latch onto; I honestly couldn’t tell you much about any of these four people other than their goals in life.

None of this makes Cut Throat City necessarily terrible, just a frustrating watch because it does have plenty of ingredients to be a good or possibly even great film. The poetic monologues and various musings about racism during this specific point in time are all fascinating given they come from a wide range of perspectives, and the ensemble cast is juicy and entertaining to watch, but the narrative never amounts to anything fully satisfying. The action is also unmemorable which, ultimately, is what really does this one in since Cut Throat City isn’t sharp enough as a sociopolitical statement.