It is the story of the all-black Twenty-Fourth United States Infantry Regiment, and the Houston Riot of 1917. 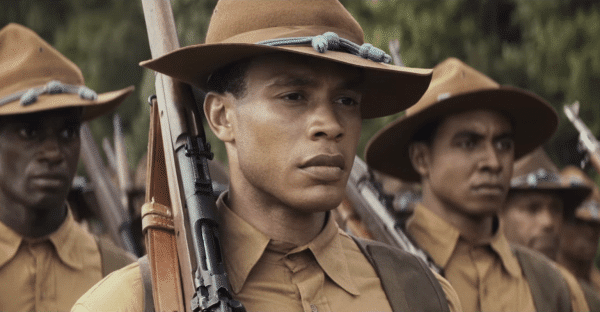 At one point during The 24th, African-American soldier William Boston (Trai Byers delivering an impassioned, riveting performance navigating the murky waters on how to actually make social progress for his peers) basically says that the more a group is oppressed, eventually, those people will rise up not resembling a man but murder itself. Whether that’s actual dialogue lifted from the history books or not, they are words from the Houston riot of 1917 that reverberate all the way to today’s current protesting for social equality. To be fair, the strength of the script shouldn’t really come as a surprise considering The 24th comes courtesy of filmmaker Kevin Willmott (and also co-written by star Trai Byers), who frequently collaborates with Spike Lee on projects exploring similar racial tension.

Before the actual rioting occurs, The 24th gives viewers a look at the all African-American infantry with hopes and ambitions of being deployed into France during World War I to prove themselves in a statement for equality. At the center of that focus is the aforementioned William Boston, unlike all of those around him due to his travel experience (he’s already been to France and seen what a more progressive society looks like) and vast education that is admired by his squadmates and something that comes to intimidate the majority of the close-minded white men surrounding him. However, his optimism is not encouraged by all, frowned upon by Sergeant Hayes (Mykelti Williamson) and opposed by fellow soldier Walker (Mo McRae) who thinks it’s all in vain. Such endearing characteristics also earned him the inspirational favor of Marie Aja Naomi King) which is a serviceable romantic subplot typical of biopics. 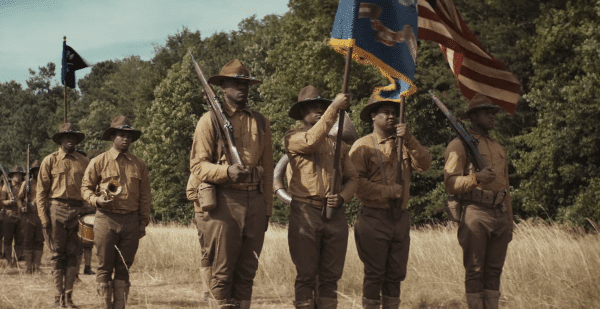 Stationed at Camp Logan in Houston, the 24th naturally faces plenty of hostility from the racist locals who do everything from urinating on Black people to threatening them to engaging in physical violence. There appears to be a turning point in the system when, as William Boston is gradually giving slightly more power and responsibility over the course of the film, manages to get a white man arrested for the murder of a Black man in broad daylight. Later in the film, the judge lets the crime off the hook, reiterating the point that things don’t change; even now, the same systemic corruption applies. It reaches a point where once some police officers start getting murdered in the riots, you almost want to start clapping in your own home even if those two wrongs don’t necessarily make a right and the film is pretending the situation with complexity.

Also present is Thomas Haden Church as Corporal Norton who is caught between furthering his own military career and sticking by his own beliefs standing by the side of the 24th infantry until they are deployed for combat. He does his best to make sure that the soldiers are is respected as much as possible within one of the most racist sects of America at the time, but has his own shortcomings as well showing that even the proverbial good ones can give up on the cause when it’s an obstacle to their own livelihood. It’s a commendable turn from Thomas Haden Church as a mostly honorable leader that does believe in equality. It goes without saying that the second half of the film, which is mostly the Houston riot, is comprised of uncomfortable but necessary violence, intensity, and heated mutiny that is compelling to watch. Kevin Willmott deserves just as much credit for giving these characters backstories and personalities leading up to such violence, and his assembled ensemble is nothing short of fantastic whether it’s coming from rousing and defiant speeches or aggressive white men demanding subservience. It doesn’t quite pack as powerful a punch as Willmott’s works with Spike Lee (they even wrote Da 5 Bloods together which is bar none one of the absolute best movies of the year), but The 24th is still very much a movie for the moment that pinpoints exactly why protests and riots are sadly still necessary.