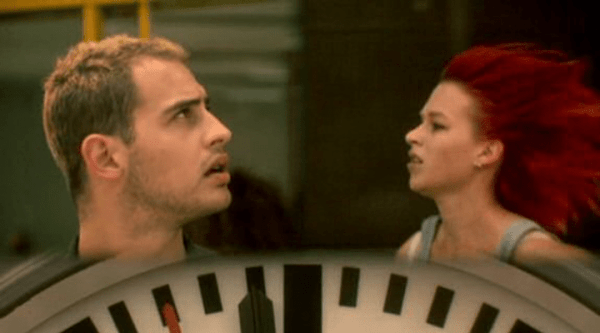 Occasionally a film can burst out the blocks with the kind of flair and visceral energy that grips you from the start and never lets up. Some films just have a sense of perpetual motion. There’s always something happening. A film like Mad Max: Fury Road for example, kept up an almost relentless cat and mouse chase on a huge scale, only slowing occasionally within confides of a trucks front cabin. However there are a couple of films I’ve seen recently, both of which are full of quirks, creative energy and simple but effective plots where the lives of characters intertwine. 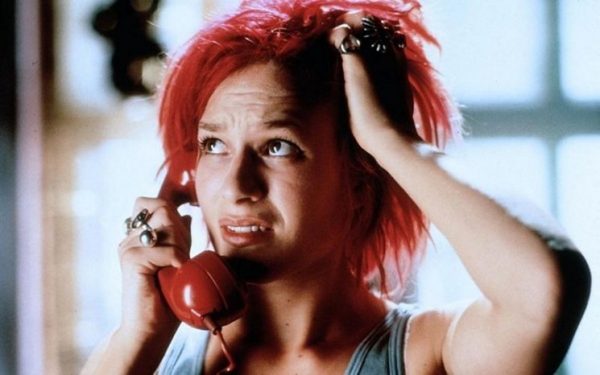 On the one hand an old favourite of mine; A film which powered through me with its energy and charm. Run Lola Run, is a cult classic which took the world by storm in 1998. The magnetic, Franke Potente became a star, and not long after would transition over to Hollywood from her native Germany. With punk red hair and introspective depth, our hero Lola has 20 minutes to source enough cash to save her boyfriend Manny from robbing a store to pay back money he lost to a gangster. Tom Tykwer’s wildly inventive and uber-cool thriller breaks out into perpetual running as three different scenarios and outcomes play out. Along the way, in each different version of the events, we see how Lola’s interactions effect the people she interacts with differently. 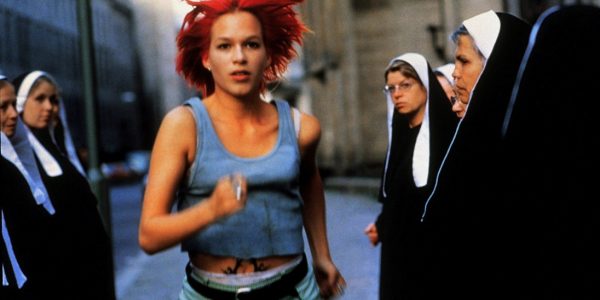 It’s kind of sliding doors with a drum and bass soundtrack. The constant, almost repetitive drones of the music, which pulsate at high tempo, meld beautifully with the lithe Potente’s graceful strides across the City as she desperately tries to find 100,000 DM. The film is an eclectic blend of quirky humour, intense interactions and the minute decisions which can effect one’s destiny. The tiniest moments can alter your path, your destiny, as well as others. The film still feels like a unique entity, even if it has shades of a few other films here and there (including perhaps owing a nod to Dangan Runner). This is a visceral ride through a strange Odyssey repeated 3 times with those differing variants what ultimately swing the outcome to three very divergent endings.

In fact, it’s that never stop running element of the film, pounding out the blitzkrieg pacing that never lets up during 90 minutes, which make the film so thrilling. It’s not about delving too much into complicated plots and deep characterisations, even if Twyker still impressively incorporates moments of grounding for Lola with her relationship to Manny as well as her own complicated family dynamics. Likewise, between these three variants, are respites as we see Lola and Manny in bed. The only times the film feels like there’s not a distinct visceral motion (or emotions). They’re rare but welcome pauses for breath in a piece which overall is frantic (without ever being overwhelming). It still remains an essential film.

Dangan Runner (Non-Stop in the west), a Japanese film which came out a couple of years prior to Run Lola Run, certainly feels loaded with similarly relentless kinetics. Opening on a slow-witted and immature kitchen porter who is scoping a bank he intends to rob, the film starts its motion. It doesn’t burst out the blocks quite like Lola but works up through the gears before steadily keeping the pedal to the metal once we get to top gear. On the day of the robbery, this shat upon worker, who wants to do something to strike back, forgets his mask. He heads to a nearby convenience store to get a mask, but forgets his wallet, attempting to steal it. It sets about a chain of events as he ends up escaping, minus his gun and gets chased by the shop keeper (who it later transpires, is off his head on smack). They then run into a Yakuza henchman who the shop keeper is in debt with. There’s also a link between the would be, dopey bank robber and the Yakuza man (who sold the former a stolen police gun). Like Lola, this shows fates linked and intertwining. 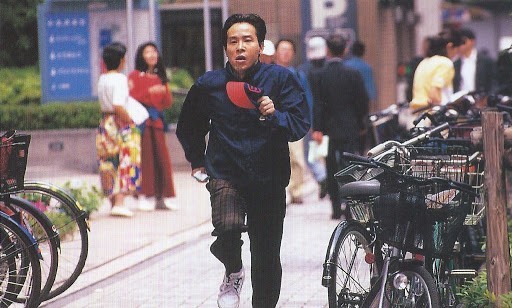 Writer/director, the cult Japanese film-maker, Sabu, crafts a wonderfully quirky and engaging film that creates a near constant state of energy. Interestingly, there’s almost constant movement and a sense of rhythm once the chase element begins, whether it be from the camera movement, or the cutting, or to energetic on screen blocking. Importantly, like Lola, we have some engaging characters. Not always sympathetic (particularly the shopkeeper) but for all their inherent (and very human) flaws, they are all engaging. Tomorowo Taguchi as our aspiring bank robber (who is obsessed with a girl who only sees him as a pest) is most interesting as there are clearer, more understandable issues in his social awkwardness that make his motives more understandable. 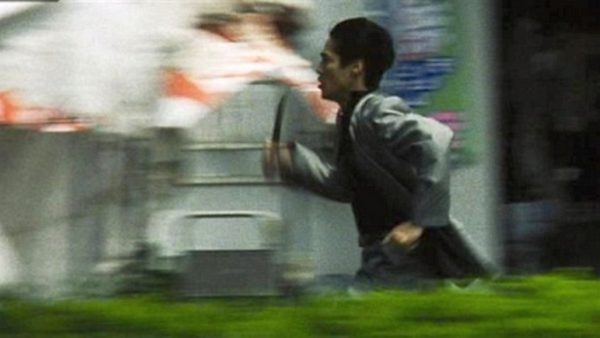 Dangan Runner isn’t a film as well travelled or regarded as Run Lola Run, but it’s certainly an overlooked film worth Western audiences checking out (indeed I hadn’t heart of it and watched based on an intriguing logline on BFI). As Sabu’s debut, it seemed the response in his homeland was understandably better (as you’d expect) and kick started his career. The film has bundles of energy but some moments of odd serenity, and a lot of enjoyable humour too, particularly when the runners (worker, is chased by shopkeeper, who is chased by Yakuza man) are starting to lose a grip on their sanity when a sense of delirium sets in. It’s beautifully shot and the editing is also fantastic. For an enjoyable and quirky pick me up, loaded with creative verve, this is well worth seeing. It’s currently on the BFI player too.