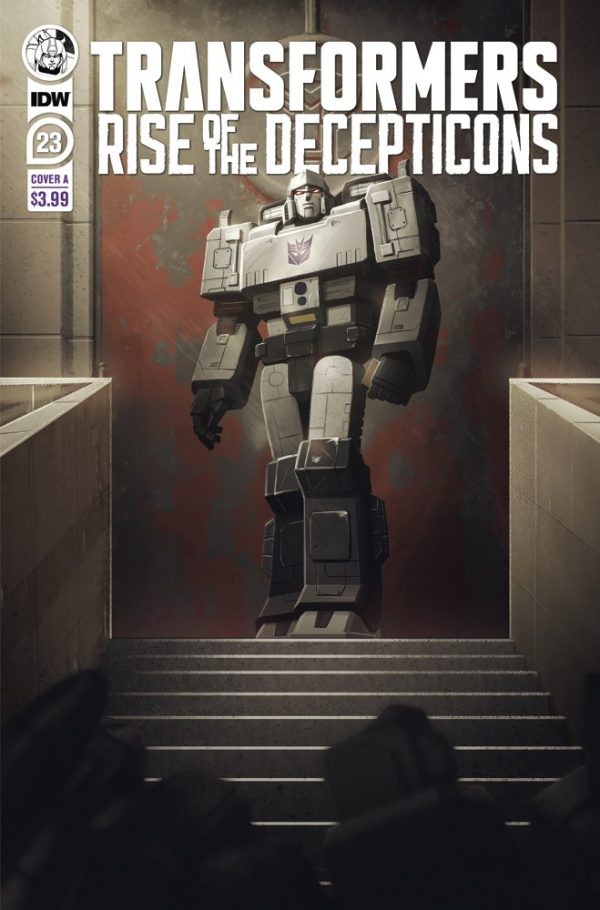 It’s been a year and a few months since IDW rebooted the Transformers comics to detail the origins of their millennia long war and now writer Brian Ruckley has reached the full tipping point in Cybertronian civilization in the latest issue. The focus bounces around a few different different characters, yet it is all centred around one particular bot: Megatron, as he makes his move for control of Cybertron and its future in a fast-paced, dramatic and compelling story.

The issue flowed really well as there was a sense of dread and tension that gradually built throughout the story. Bouncing between different groups of characters didn’t hurt the flow, but added to it with each grouping of characters being a piece to the climax, from Orion in the Senate hall to Ironhide and his security crew or even Bumblebee and Starscream down in the jail. Each scene that took away from the main event, that being the big Senate meeting, didn’t disrupt it either as they were only as long as they needed to be. Ruckley knew where the readers would want to be the most and didn’t do much to keep away from there.

Make no mistake, Transformers #23 is Megatron’s moment. After many issues of the Decepticon leader plotting from the shadows while characters only theorized he was at the centre of their problems, Megatron finally made his big move in taking forceful control of the Senate. The power of this scene, though, isn’t Megatron fighting a bunch of bots or at last donning his iconic cannon, but his fiery speech to the Senate. This is one of the few times we’ve seen him play to a crowd and he does it quite well as he reveals to the Senate the extent of his deception over the course of the series. However, what is interesting is that while he speaks of how much he and his troops have done to trick them he actually seems quite earnest in every word he says. He’s not monologuing about world domination or promising to destroy his enemies, but of the Senate’s folly and poor efforts to improve Cybertron. His pitch to ‘Make Cybertron Great Again’ makes Megatron a more interesting villain since he’s not in it entirely for himself, but genuinely wants what is best for the planet and all Cybertronians. Seeing him like this just makes it more intriguing for when and how he turns fully evil.

As for the supporting characters, each had their part to play well. Orion Pax and Megatron’s brief scene together served to remind fans just how close these iterations of the soon-to-be foes were while foreshadowing their future. Orion’s warning to Megatron that the “means will consume the ends” and Megatron will become the very thing he is trying to fight against is telling, but of course it falls on deaf ears. Meanwhile, he got perhaps our best use of Starscream yet. He hasn’t been in the series very often, but when he does show up he usually makes a big impression and that is true of here as well. The fact that Starscream knows Megatron is about to do something, but chooses to be absent from the Senate meeting and see which side will be best to throw into once all is said and done speaks to so much of his conniving nature.

Anna Malkova’s artwork is once again very rich and detailed. Her expressions are nicely done, especially in some of the close-up panels of a character’s face. From Orion’s sorrow after he failed to reason with Megatron or Starscream gloating to Bumblebee, there is a lot of detail as Malkova relies on the character’s body language to further convey their emotions. The way Starscream’s posture changes throughout his talk with Bumblebee and the confidence he holds is perhaps the best example of Malkova’s strong character work. Joana Lafuente’s colours compliment Malkova’s artwork and helps create the tension-filled space of the Senate room with vibrant, yet muted, colours to emphasize the coming darkness. All in all Malkova and Lafuente made one of the best looking issues thus far.

Transformers #23 is a highlight in IDW’s reboot as it finally kicks off the long-awaited war with plenty of tension and interesting character choices. The spotlight on Megatron is great as the uncertainty over what he’ll do next continuously builds until he reveals the full scope of his plans. Ruckley makes a fast-paced climax to this current story arc that entertain both old fans and new fans while still delivering interesting character work.